The updates have made the little adventure bike a far better all-rounder than its previous iterations. Although, something is still amiss 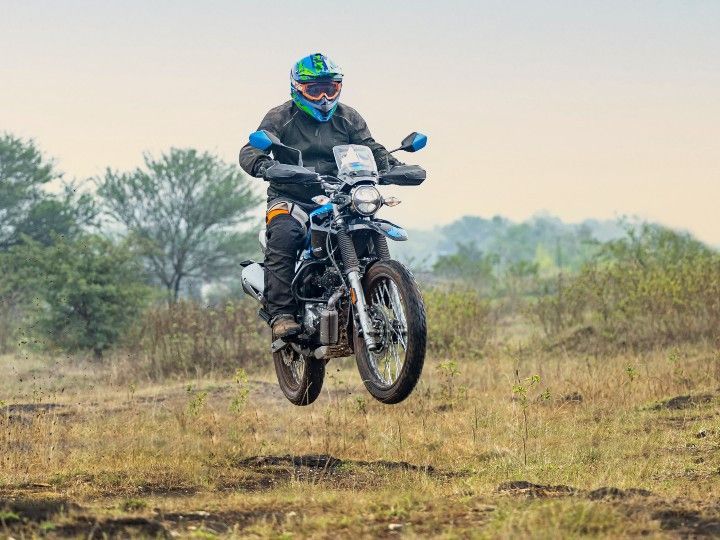 Hero’s purpose-built XPulse 200 has been spruced up for 2021. The 4-valve update was in the pipeline for a while, aiming to bring about more zing to the adventure bike. You also get a larger oil-cooler, a bit more oomph from the motor, revised switches and new colour schemes to distinguish the 4V from its outgoing 2V variant. What changes have the updates brought to the XPulse’s capabilities?

Hero has made quite a few tweaks to the 199.6cc single-cylinder air-cooled motor. It isn’t just the addition of two extra valves here but also serious revisions to the gear ratios (1st, 4th and 5th being taller and 2nd and 3rd shorter than before), a new 45-tooth rear sprocket (7 teeth more) and a bigger 7-fin oil-cooler (two more than the old one).

The combination of the above updates results in a bike that is livelier, eager to attack off-road sections. Where it holds a serious advantage over the older 2V XPulse is in in-gear driveability. No longer are you working the gearbox to keep the engine purring along nicely. There’s enough drive on hand to even take on the gnarly surfaces in a gear higher without you having to worry about stalling the bike, so that your sole focus while off-roading remains on the obstacles ahead.

Another reason why the 4V XPulse performs better is the new suspension tune. Hero hasn’t shared this information anywhere in its press docket, as the initial stroke of the long-travel suspension has been softened. For most buyers, primarily those who are seeking a comfy commuter and beginning their adventure journey, the plush rear setting would be quite welcoming. It allows the bike to remain planted and in turn inspire great confidence when going over harsh terrain.

On the older bike, you would get tossed about a fair bit, which newbie riders would find unnerving. Experienced off-road riders, though, wouldn’t mind the more responsive suspension tune as that would give them a better feel for the surroundings and hence, stay more in control of the bike. For such enthusiasts, there’s good news.

From what we’ve heard, Hero has already homologated the same Rally Kit for the 4V XPulse and it will be offered as a separate variant as well, which will probably be called the XPulse 200 4V Rally. It is something similar to the TVS Apache RR 310 BTO where you can get the Rally Kit factory-fitted and save a sizable chunk of money. The Rally variant is still a few months away, though.

The advantages of the updates transfer into the urban jungle as well. The improved driveability means that you can ride around in 4th gear all day, which wasn’t quite possible on the old bike. The added initial zippiness makes it a hoot to zip through traffic. And thanks to the supple ride, you get to waft over our far-from-smooth roads with a grin.

Also, the improvements in combustion and the wider torque band results in a better city fuel efficiency score of 51.59kmpl. That’s quite commendable considering the extra performance on tap. However, its highway score hasn’t improved.

Hero hasn’t really pushed the envelope when it comes to the highway experience of the XPulse 200 4V. What the engine updates have brought about is a motorcycle that reaches its sweet spot of 85-90kmph far quicker than before. And since the zen zone of the bike hasn’t changed much, the XPulse 4V delivered 42.28kmpl in our highway fuel efficiency test, which is almost identical to the 2V XPulse’s tested figure (42.37kmpl).

The 4V XPulse shows signs of gruffness post 95kmph. And while it will be able to clock speeds of 110-115kmph, the motor grumbles a lot, indicating that you need to take it easy. Vibrations at the footpegs become irritating beyond 8000rpm, so it is better that you cruise at a lower speed.

In its comfort zone, the 4V XPulse feels a lot calmer and easier on the highway. The throttle is lighter, overtaking doesn’t need much effort and you don’t really need to downshift to get past slow trucks or vehicles.

Hero has equipped the XPulse 4V with a larger oil-cooler and rerouted the oil lines around the cylinder head for improved thermal efficiency. It isn’t so much to do with the ‘heating’ aspect of the engine but rather allowing it to run at higher revs for longer periods while still keeping the oil viscosity as desired.

The new seat profile and new seat foam comfort your bottom better over longer journeys. That said, the rider triangle is still a bit commuterish and we would’ve liked the handlebar risers from the Rally kit to be a standard fitment as it eases your upper body posture.

We also found the new switchgear to be quite disheartening. The quality of the switches is a notch lower and even tactility isn’t that great. Yes, the traditional pass switch is a welcome addition but the rest of the switches dampen the riding experience a bit, especially when commuting.

Considering Hero’s intentions, the XPulse 200 4V is the best iteration of the bike so far. Newbie adventure thrill seekers would find it easier to get on board with the bike’s improved capabilities. It is a better all-rounder now, handling commuting, touring and off-roading duties far better than the outgoing model. And the premium for this improvement is just Rs 5,000, which at Rs 1,28,150 (ex-Delhi), makes it well worth the money. If you were expecting it to be a do-it-all motorcycle, well, it still isn’t and that’s okay.