Tata’s iconic three-row SUV, the Safari, is making a comeback this year. Does it live up to the promise? 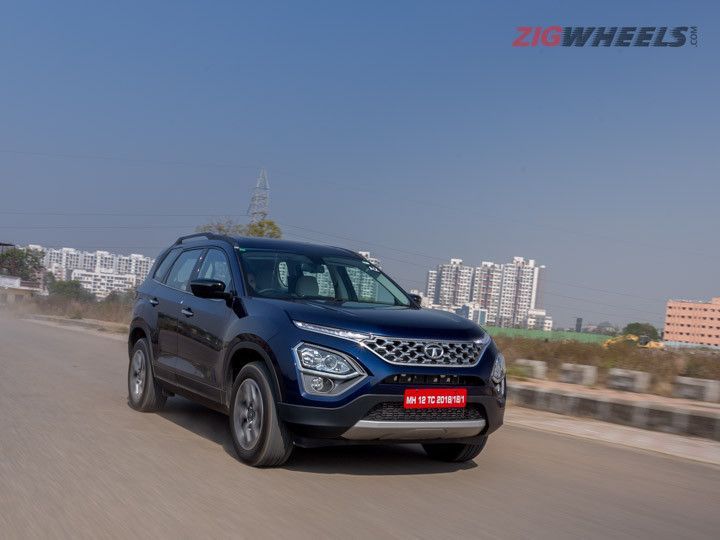 Should Tata have called this the Harrier XL or the Harrier Plus? After all, the Safari name comes with a lot of attention and expectations. Especially because of its new front-wheel drive architecture and slippery shape, the new version has thrown the Safari’s traditional and adventurous value for a more modern and practical approach. However, for those of us looking for a three-row seven seat SUV, the Safari is the only option in Tata’s lineup until the Hexa makes a comeback. So, while the specialness of the name is water-tight, let’s find out just how special this Tata really is.

The Safari’s genetic connection to two of its siblings is fairly obvious. Even at a glance you can make out that it is based on the Harrier and looks most like the latter when viewed from the front. There are a few well judged chrome touches to lend it an air of stateliness to the otherwise dynamic face. The glittering chrome tri-arrow grille makes it immediately distinctive from the Harrier even from a distance. Chrome garnishes also curl around the headlamp pod and grille carefully.

From the side there’s a lot more to take in. Yes, the glasshouse on the original Safari was more upright, giving it a more square look, whereas this Harrier-based design has a heavily raked A-pillar giving it a swept-back look. But the Safari looks taller than the Harrier, and that’s because it is, by 80mm. Which also allows the trademark stepped roof of the Safari to make a comeback here. However, that distinctive design element can only be enjoyed in the non-sunroof versions. On the sunroof versions the roof flows smoothly, but the illusion of a stepped roof is created by the rising roof rails. The Safari is also longer by 63mm and this length is added behind the rear doors. The glass area also steps up after the C-Pillar to improve the airiness for the third row.

There’s a stronger look too as the wheel wells look better filled thanks to 18” alloy wheels, which are also larger than the ones on the Harrier. The overall larger diameter (235/60R18 vs 235/60R17) has also bumped up ground clearance on the Safari, although Tata hasn’t shared this figure yet. Unlike the Harrier’s relatively racy rear, the Safari’s is upright and distinguishes from the Harrier clearly. The tail lamp shape looks similar but it uses two LED blades instead of one. All in all, from the rear the Safari’s genetic connect to the Discovery Sport is hard to ignore, and pleasing to the eye.

This conversation has to start with the second row. Here you feel like you are stepping up into the cabin. The “stadium” style seating is discernible when you settle onto the bench seat, as  Tata has raised the hip point of the bench by 30mm! The effect is even sharper when you hop onto the captain seat as here you are sat another 10mm higher! Which means the under thigh support is excellent even for taller passengers and shorties like me can even look over the front seats to the road ahead. For most of us of average eight, this is perfect; however, a taller passenger might feel less at ease as it would push the eyeline quite close to the top edge of the window! Don’t worry about the headroom as there’s 40mm more, which feels a lot more than it sounds. Also, keep in mind that the oh-so-desirable captain’s seats felt a bit firm and the seats felt a bit narrow for larger occupants.

The bench seat might just be the more sensible option overall. It accommodates an extra passenger, and slides and reclines too. And the “Boss” lever on the front passenger seat allows you to slide it forward to open up even more room to lounge around in. Strangely, you can’t tilt the seat forward from this lever. You do get two USB ports to plug your devices into. That said, flip-up tables or sunshades for the rear doors would have made it a better fit as a mobile office.

Interestingly, the rear door is unchanged from the Harrier, to save cost--which means access to the third row is still restricted. So, getting in requires some amount of clambering and hauling, which would have been minimised by a grab handle of some sort near the c-pillar. Thankfully the one-touch tumble function on the passenger side is convenient.

The third row is clearly very usable for adults. Thanks to the sliding second row of seats you can open up space in the third row while having generous kneeroom left over even in the second row. In the third row headroom surely isn’t as much to sit comfortably even a couple of hours. A dedicated air conditioning system with blower controls aims to keep you properly cool throughout the journey. Cupholders, clever stowage bins and two USB ports make it a space you could spend time in without complaining. The inclusion of proper adjustable headrests and three-point seatbelts adds to the peace of mind too.

Complaints? A paltry 73 litres of boot space when travelling with seven passengers means accommodating even an overnighter suitcase will be a struggle. Instead, you will have to opt for small soft bags to pack in any belongings. For reference, the Hector Plus offers a reasonable 155 litres of storage. So Safari owners would have to opt for a top box, which can conveniently be mounted on the roof rails. However, the 130kg load carrying capacity is applicable only for the steel roof versions. So think hard before picking the “+” variants that offer the sunroof. Alternatively, you can choose to drop entire rows or a combination of seats in the third and second rows to pack in luggage and five occupants. With the third row folded down the Safari can take in 447 litres, which is only slightly higher than the Harrier’s 425 litres.

You definitely aren’t roughing it out in the Harrier--and for that matter the Safari, which shares the same interior design but feels just a touch more lavish and sophisticated. The white leatherette for the seats and door pads feels premium and contrasts with the black faux wood insert on the dash. For a sense of sophistication the Safari offers a six-way power adjustable driver’s seat and ambient lighting, albeit minimal.

The Safari goes a step up on features over the Harrier by offering a gigantic panoramic sunroof, electronic parking brake, connected car technology, and an integrated tyre pressure monitoring system. The fantastic nine-speaker JBL sound system and the seven-inch driver’s MID carried over from the Harrier is a big plus too. There’s lots of conveniences like seven USB ports, and generous stowage bins that are intelligently partitioned to organise things better.

However, the “wow quotient” deficit to its rivals is significant as they offer much larger screens for the infotainment system, ventilated seats, wireless charging for the phone and a powered tailgate too. On top of that, the Safari’s 8.8” infotainment system feels a bit lacklustre as less expensive competition offers larger screens, or better features like wireless smartphone connectivity and better responsiveness too. As Tata’s flagship, the poor resolution for the reversing camera, the laggy feed and the slow touch response feels disappointing in today’s age.

A taller, longer and heavier-by-70kg Harrier should be a less well mannered Harrier, right? Well, not unless the suspension has been retuned by specialists like say Lotus Engineering! As a result the Safari feels surprisingly on point to drive and to be driven around in. Firstly, it feels absolutely confident and accomplished while gobbling up tarmac at highway speeds, like it should! The suspension has been tuned to keep body movement firmly in check and as a result lane changes even at high speeds doesn’t feel alarming. Impressively, the tautness of the suspension doesn’t result in harshness when hammering over potholes or rough roads, and it bashes bad roads without remorse or hesitation. We expect this setup would also keep the Safari from getting sloppy when driven with a full load.

After a short while behind the wheel the Safari feels almost as easy to drive as a car. Although the steering feels a bit too light at higher speeds, the directness lets you place this SUV without vagueness. The steering weight requires some getting used to as it is heavy at low speeds and then lightens dramatically as speeds increase, but it’s something you can get used to. The use of all-wheel disc brakes adds to the sense of confidence too. This Tata has lots of safety features like ESP, roll-over mitigation, hill-hold, cornering stability control, ABS with EBD, and ISOFIX mounts as standard too. While two airbags are the norm the top variants get six! So there’s lots to be thankful for when you hit the road.

The 2-litre diesel engine and gearbox have been carried forward from the Harrier, and in this new 170PS state of tune is pretty easy to drive. The drive modes sharpen its suitability for a given environment. City mode makes it easier and peppier to drive at low speeds in the city whereas Sport mode makes faster drives or highways stints snappier. Travelling in the Safari will feel all the more enjoyable as the engine gets up to speed quickly and more importantly without making too much of a fuss.

While the long throws for the gear lever and the long travel for the clutch will make the 6-speed manual transmission option a bit fatiguing in stop-go city traffic, the drivable nature of the engine will reduce the hassle of gear changes. However, the gearbox to go for is the automatic. The Hyundai-sourced six-speed planetary gearbox is very polished: quick, smooth and absolutely in tune with the driver’s needs.

However, the lack of AWD will irk potential buyers. While all-wheel drive could be termed as an indulgence, rear-wheel drive is a boon for people living in the hills. Then, keeping its modern and sophisticated bent in mind, the lack of a petrol drivetrain is surprising too. But the drivetrains currently on offer make this Tata feel like a Safari should on the road.

Summing up the Safari will always be tough. Like Land Rover’s Defender, the Safari is an endearing and enduring icon. But unlike the new generation Defender which has stuck to its roots while reinventing itself for a new era, the Safari has given up some of its traditional simplicity, robustness and earnestness for modern day sensibility and pragmatism.

Aside from the missing halo of an all-wheel drive system, there are other shortcomings to this package too. The lack of luggage carrying capacity with seven occupants and the lack of wow features for a flagship is perplexing. However, this Tata’s ability to transport seven occupants with confidence and comfort, in the city and on the highway, and its nonchalance over rough stretches just goes to show that while it may not be very Safari in form, it has a lot of Safari in its spirit.

Tata is expected to launch the Safari in February 2021 itself. We expect it to be priced between Rs 14.5 lakh and Rs 22 lakh. 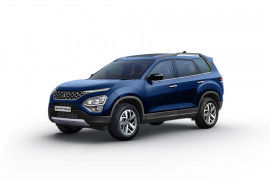 All Comparisons of Safari