Can Aprilia’s Storm 125 deliver the calm and sensible quotient that makes it the better pick for more scooter users? 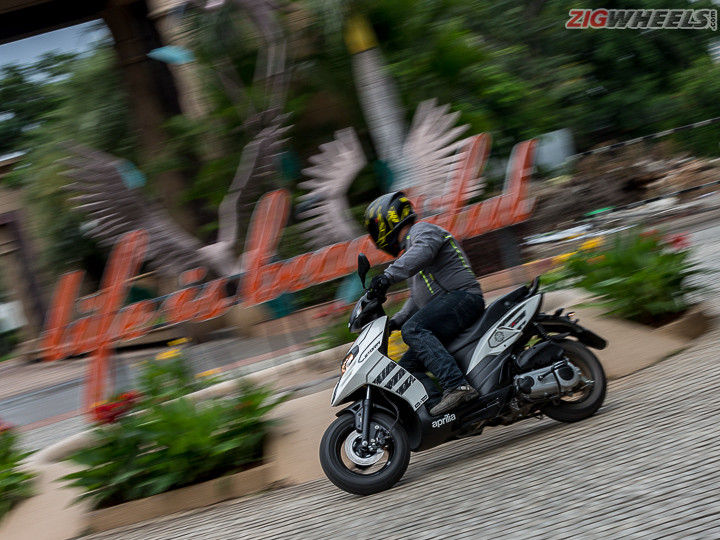 Delivering the best “sensible” quotient is the success mantra for scooters. Aprilia, however, chose to focus on excitement and performance for its SR range of scooters. Stepping from 150cc scooters into the 125cc segment widened the appeal of the Aprilia scooters to some extent. But, the sensible quotient for Indian buyers really jumped with the arrival of the Storm 125 with its chunkier tyres and lower price tag. The arrival of the BS6 and disc brake version changes the Storm’s importance in the Aprilia lineup as it now becomes the only 125cc scooter on offer, pushing the similarly priced SR 125 out of the brochure. So, how does the “sensible” Aprilia fare?

The Elefante in the Room
Clearly, when gauging the Storm’s sensible quotient we will have to use a more Italian yardstick. As the Indian VFM-seekers will be all too quick to point out that the Italian can’t match the feature list on other 125s, Japanese or Indian. For starters, LED DRL or LED headlamps are expected on the Storm or SR only after the SXR makes its way to showrooms later this year. There’s no brake lock clamp, or a combi lock for remote boot opening. Neither is there a remote fuel filler, a charging socket or a boot lamp. On the mechanical front, while other manufacturers have gone with all-new engine architectures with integrated starter generators for silent start and stop-start functions, the Aprilia doesn’t.

However, the disc brake version of the Storm gets the part-digital instrument cluster for a bit of modernity. The unit, borrowed from the SR 160, gets an analogue speedometer while the digital screen shows you fuel levels, tripmeter, odometer and time. But, there’s no DTE (distance to empty) or fuel consumption information here. Also, while the Storm is the most affordable Aprilia on sale today it is still over Rs 20,000 more than other 125s in the market!

Swag it all, this Aprilia also seems to say. Although the headlamp has gone from a double barrel to a single barrel design, like on the SR, it still looks properly sporty. There’s an air of ruggedness thanks to the chunky block pattern tyres, that also seem to make the body look slimmer and sharper. The stronger graphics on the sides look appropriate for something that’s promising to tackle some rough roads.

Play it smooth and fun!
Ready to pound some on-off roads? That’s the ambition that rises from the block pattern Vee Rubber tyres. These also run on smaller 12” rims which has allowed Aprilia to use taller profiles for better cushioning. The Storm 125 uses a 120/80 - 12’ front and a 130/80 - 12’ at the rear, while the SR uses a 120/70 - 14” setup at both ends. This gives over a centimetre more of sidewall to insulate you better.

The suspension has also been tuned differently to tackle the change in tyre size and is overall set up on the softer side. These changes combined have another benefit: lower seat height. While the claimed difference in seat height and ground clearance between the SR and Storm is just 5mm, our back to back tests between the two showed that the Storm actually is lower than the SR 160. This is probably due to the difference in suspension setup, with the Storm settling down a bit more once the rider hops on. Even the claimed 775mm of seat height is very low, so the Storm promises to be pretty easy to ride even for shorter riders.

Out on the road the Storm delivers as promised. Be it potholes, broken roads, or no roads the Storm sails over them in a manner that would be the envy of any SR 160 owners. There are few shocks even over bad roads and it's only when you ride fast that sharp edges tend to be felt at the handlebar. Even when riding two up the Storm 125 remains composed over bumpy roads. The large seat and the texture for the seat cover are easy to appreciate, however, the firm cushioning for the seat makes it a bit painful on longer stints. Also, the single piece grab rail for the pillion isn’t as easy to reach out to as the split units on the SR.

Emotional connect?
If you are looking at storming down brown lanes, the block pattern tyres also give you a good sense of confidence when you are riding over loose surfaces. But most of your time is sure to be on tarmac, and there you will be grateful that the Storm and the SR share chassis and suspension hardware. While the heavier tyre means the 125 doesn’t feel as pointy and sharp as the SR 160, you quickly get past the initial heaviness when attacking corners and learn to rely on the confidence and precision of the Storm.

The 200mm disc brake on the storm is smaller than its rivals, but the bite on offer makes shedding speed easy and fun. However, when using the combined braking system, which is lined to the rear brake lever, it is far too easy to lock up the rear wheel. It ends up feeling that the front brake isn't getting actuated, or too little. An improvement on this calibration would make the Storm feel more sure footed for sure.

The 124cc three-valve engine now uses fuel injection to meet BS6 norms. For the most part the engine is smooth and easy to use. With 9.92PS there is punch on offer, but it will make you work for it. Throttle response is adequate at first, but as you open the throttle further for a change of pace the 9.7Nm of torque doesn’t seem to be listening to your right wrist. So you just have to whack the throttle open and wait for the engine to catch up. This trait isn’t too different from the BS4 version, which was bested by the more ordinary 125s then too.

Also, we noticed that the fuel injection calibration could be more refined as revs would hold even after closing the throttle on occasion, which resulted in unintended acceleration. While this wasn’t worrying it did feel odd.

Winning Sensibility?
The chinks in Aprilia’s package, like the lack of features, feel more glaring today than before as the lower priced competition offers more. The draw of the Aprilias has been their emotional appeal and that is going to be the key factor for riders looking at the Storm too. However, as anticipated, the Aprilia Storm 125 delivers greater versatility and usability than the SR. Improvement in comfort and better ergos makes it easier to ride for more riders and will ensure it is ridden more too. So, for those looking for a distinctive and tasteful, albeit pricey, scooter that they can use with ease over a variety of road conditions, the Aprilia Storm 125 makes a lot of sense.