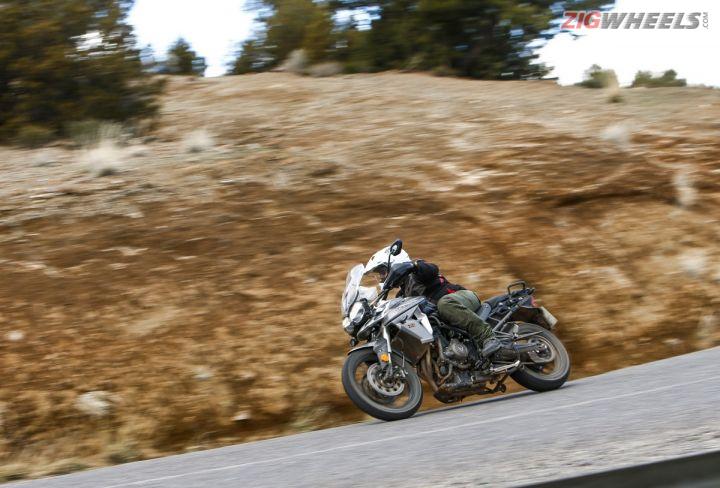 There was a time when “big bikes” in India were synonymous with faired sportbikes. And while that’s still generally the case, things are changing. Of late, there has been a shift towards adventure tourers, and it makes perfect sense, given the practicality they offer, along with the promise of the whole aspect of “freedom” and “hitting the open road” that has enamoured many to the charms of motorcycling.

These thoughts flash across my mind, but they’re gone in a second as my focus shifts back to the narrow roads around the Atlas mountains in Morocco we’re blasting across, doing 160kmph plus. This wouldn’t have been possible on a sportbike, I think for an instant, before throwing the bike into the next series of bends at breakneck speeds over bumpy tarmac. It all just feels so easy on this Tiger 800, a bike that has been front and centre of the ADV craze that’s been taking over the big bike culture in India. And the new Tiger is even better suited for this sort of shenanigans. (Read the larger 2018 Tiger 1200 review here)

Triumph says they’ve improved the Tiger’s formula with 200 different changes across the board. And while all of those would be impossible to list in the span of one review, here’s what they all felt like.

The Heart of the Beast
There aren’t really any changes to the 800cc inline triple motor that powers the Tiger to give it any more performance. So power and torque outputs remain the same - 95PS coming in at 9500rpm and 79Nm at 8050rpm, respectively. While these numbers aren’t anything to write home about, the hallmark of this engine has been its tremendous tractability - it makes almost 70Nm of torque right from 2500rpm onwards, and that allows the Tiger to pull from speeds as low as 40-45kmph in 6th gear! Thankfully that hasn’t changed on this updated bike.

But what Triumph has worked on here is making the engine even smoother than before. A lighter alternator also allows the motor to spin up faster than before, and everytime you pin the gas, the digital tacho needle screams to 10,000rpm in no time. This free-revving nature has made the Tiger even more fun to ride on the road and had us constantly pulling to triple-digit speeds on the first day of the ride, which we spent on some picturesque, albeit broken mountain roads. And once the revs build, this Tiger even sounds much better than before, thanks to a new smaller and lighter exhaust. The whine which Triumph’s three-cylinder engines have been known for has been muted to make way for a more throaty exhaust note. Now it actually sounds like a fast, powerful motorcycle - finally!

A small, but critical change has been made to the gearbox as well. The first gear ratio has now been shortened to give it much better acceleration when taking off from a standstill, and it even helps in staying off the clutch at really slow speeds - something we really came to appreciate when riding off the road. But the off-road aspect is something we’ll touch on in just a bit.

Is it better on the road?
To a large extent, on the road, this new Tiger felt pretty similar to the old one, at least when it came to handling. The chassis hasn’t changed at all, and even the suspension setup on all but the top-spec road variant remains the same. The front end still feels quite vague and can’t match the directness of steering that it’s Italian competition offers. But the top-spec road-going avatar of the new Tiger - the XRt, does have a trick up its sleeve. It packs high-end fully-adjustable Showa suspension, and that will certainly allow riders to tune exactly how they want their big cats to behave. Mind you, this isn’t the electronically adjustable suspension that you get on the larger Tiger 1200, so it will need some expertise to set up right. And even though the suspension was set up more towards comfort on our test bikes, this Tiger felt a lot more confident than before while negotiating bends. Too bad the footpeg feelers ground quite easily when you chuck the bike from one corner to the next.

An area that has definitely seen improvement is braking. The Brembo front brakes on all models (except the base XR, which gets Nissins) have been specced up. So there’s plenty of braking to be had, even when you’re using just two fingers on the lever.

But what really improves the Tiger’s road manners are all the changes to the ergonomics. The Tiger was always a comfortable bike, but now it’s even more so. The seat is now made from a different compound, uses extra foam and something called 3D net technology, which allows it to deform more to the rider’s shape. When you hop on for the first time, there’s a bit of softness to the seat, but in a couple of minutes, the seat settles into a firmer position, and if I’m being honest, it’s one of the comfiest seats I’ve had the opportunity to sit in, on a motorcycle. The rider’s seat has two height settings as well, whether on the XR or the XC variants, helping the bike accommodate riders of varying height that much more easily. And now with the handlebars moved towards the rider by 10mm, even the riding posture has been improved for a more natural feel, whether sitting in the saddle or standing on the footpegs.

Assisting the Tiger’s on-road comfort is a new windscreen which features special aero deflectors built into it to divert wind away from the rider and pillion. And it certainly seems to work. At speeds of 160-180kmph, we experienced significantly less helmet buffeting. This should really help in making long distance rides on this bike that much more comfortable. Oh yeah, and the windscreen is now adjustable by hand, making it easy to change its height while riding.

Is it better off the road?
Big heavy adventure touring motorcycles are always a handful when riding off the road, and this has been true for the Tiger 800 XC range (the off-road biased variants), even though it’s nowhere close to being the biggest or heaviest in this class of motorcycles. With negligible off-road experience to speak of, I was naturally nervous when we took the top off-road spec Tiger XCa over some sandy and gravelly trails outside of Marrakech.

Thankfully though, just like its larger sibling, the 1200, this mid-capacity Tiger now offers multiple riding modes too (depending on the model), and a couple of them, namely Off-Road and Off-Road Pro have been designed to make this bike easier to handle on the loose stuff. As we started off, I switched the bike to “Off-Road”, which completely kills rear ABS (but thankfully keeps front ABS on), and backs off the traction control just enough to allow even an off-road novice like me to slide the bike around. There were a couple of times on the trail when I got a little too excited with the throttle and had the back-end whip out wildly, only for the electronics to reign it in automatically without a worry.

With my confidence built, it was time to try out Off-Road Pro mode. This mode completely switches off traction control and ABS, but I managed to customise it to keep front ABS on to keep things manageable in case they got a bit hairy. Here, the tractability and linear torque delivery of the motor really helped manage rear wheel spin, and in no time, our whole group was pulling off small, controlled slides on command. And when crawling through a pebbled dry river bed and up a very sandy hill, the shorter first gear ensured that the bike didn’t run out of breath at any precarious point. By the end of the off-road day, we were all feeling like Dakar heroes, although with aching thighs and backs from the hours of standing on the pegs and sliding the bike around in the dirt.

A large amount of this confidence was down to the new pukka off-road spec Pirelli Scorpion Rally tyres which have been ‘Triumph-approved’ for the Tiger 800. These tyres just provided a ridiculous amount of grip on the dirt.

Is that all?
Well, no! Apart from slightly improving its road manners and vastly improving its off-road abilities, the Tiger 800 has seen a raft of other changes that make it feel more premium than before. For one, the headlights (which have a slightly different design) are now LED units on all except for the base XR and XC models. The slanting LED DRLs also lend the Tiger a more aggressive, angry face - and really make it stand out in a crowd. The top spec bikes also get all-LED auxiliary lights.

The cockpit has seen some changes as well. Gone is the staid instrument cluster (at least on the mid- and top-spec Tigers), instead replaced by a colour TFT screen similar to the one we’ve seen on the new Street Triple and Tiger 1200. The switchgear has been thoroughly revised as well and is now backlit, just like on the big Tigers, and there’s now a 5-way joystick to navigate through the menus on the dashboard. And I must say that even though Triumph has crammed in a vast amount of buttons, toggles and that joystick on one side of the handlebar, it’s all within easy reach - almost like the HOTAS controls of a jet fighter. That said, I did thumb the indicator switch when I was meaning to use the joystick, but that was sorted out after a few minutes of getting used to.

Just how much of an improvement?
While Triumph hasn’t completely changed the formula of the Tiger 800, the whole deal has been about making incremental changes that have led to a large overall improvement. So, it feels slightly better on the road. But the improved comfort will go a long way in making long distance rides easier. Off the road, the improvements have been even more noticeable, making the Tiger a lot more capable thanks to its new electronics suite. The end result is that the Tiger, which was already amongst the friendliest and most approachable adventure bikes, is just that much better and more likeable, and feels properly premium at the same time.

Triumph says that these new Tiger 800s should make their way to India in the next couple of months. And, of course, prices will go up a little bit. By how much? Given that BMW has just launched the F750GS and F850GS, the Tiger 800’s direct rivals, at fairly spot-on prices, the ball really is in Triumph India’s court to follow suit.