The updated Ninja 650 gets an all-new 4.3-inch full-colour TFT display 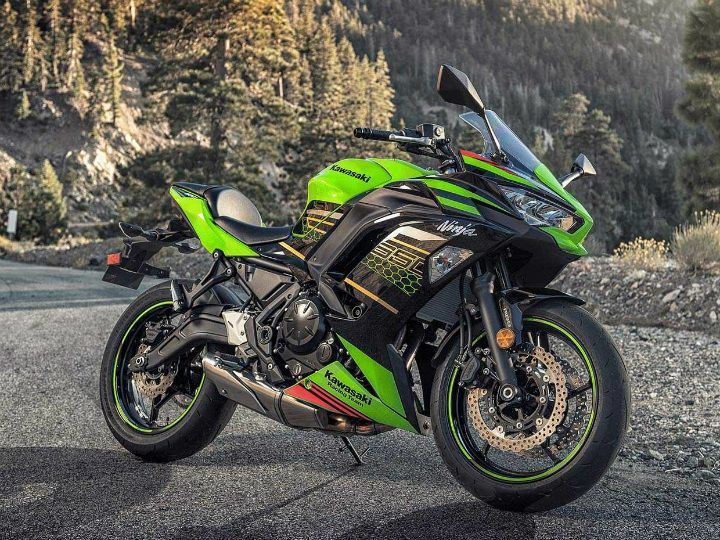 Kawasaki has updated its mid-capacity sport tourer, the Ninja 650, for MY 2020. And unlike the Ninja ZX-10R and the Ninja 400 that just received new paint options, the 2020 Ninja 650 has got a substantial update over the previous-gen model.

Also read: Kawasaki Is Offering Massive Discounts On Most Models!

The 2020 Kawasaki Ninja 650 gets an all-new LED headlamp setup and a revised fairing design, which makes it more aggressive than before. Thanks to its updated design, the mid-capacity sport-tourer now looks similar to the Ninja ZX-6R and the Ninja 400. It now comes equipped with a 4.3-inch full-colour TFT dash with Bluetooth connectivity and GPS functionality, making it the first sub-litre Kawasaki to get this. Apart from this, the bike maker has also tweaked the pillion seat slightly to make it a bit more comfortable than before. The seat height stands at 790mm, which is the same as the older-gen model. At 15 litres, the fuel tank capacity is also the same as its predecessor.

Moreover, the 2020 Ninja 650 gets a new set of shoes as well. Its 17-inch alloy wheels now come shod with Dunlop Sportmax Roadsport 2 tyres instead of Sportmax D214 tyres. Now, these new set of tyres should offer more grip than before, but we would reserve our judgment on that front until we get our hands on the bike.

The suspension setup and the braking hardware remain the same as the previous-gen model. It sits on a steel trellis frame and tips the scale at 193kg, which is exactly the same as before even with the updates. Powering the updated Ninja 650 is the same 650cc parallel-twin motor as before that belts out 68PS and 65.7Nm, paired to a 6-speed gearbox. As of now, there’s no confirmation from the company, but expect Kawasaki to bring a BS6-compliant version of the bike to our shores by early 2020.

Now, the main question: how much would you need to shell out? Well, the company hasn’t announced its India prices, but we expect it could retail at around Rs 6.0 lakh to Rs 6.2 lakh (ex-showroom), which is around Rs 20,000 to Rs 30,000 more than the current model.