ZigOpinion: Dear Honda, Y U Do This?

While Honda took a bold step into the brave new world of small-capacity ADVs, the CB200X comes across as rather half-hearted. Here’s what we think Honda should’ve done instead 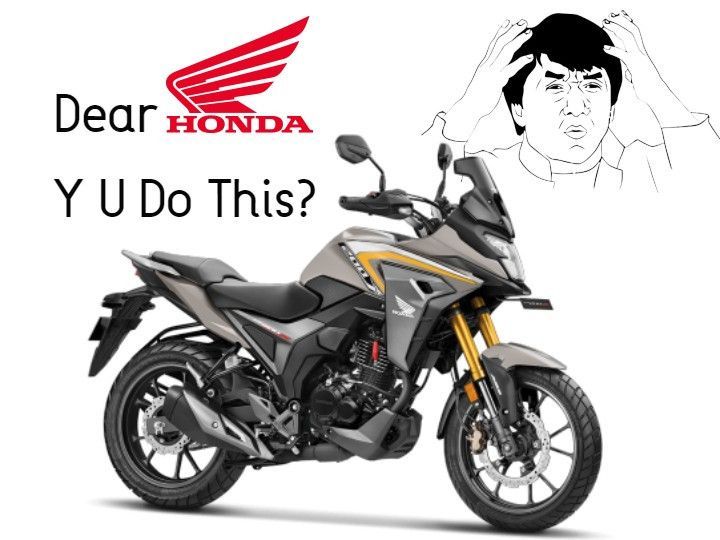 Honda recently stepped into the nascent small-capacity adventure touring segment with the CB200X. But judging by its specs and features on paper, we can’t help but feel the CB200X, as a product, is more of a perfunctory nod to the ADV lifestyle rather than a motorcycle that can actually help riders explore roads untraveled. Compounding this is the Honda CB200X’s Rs 1,44,500 (ex-showroom, Delhi) sticker, which is a whole Rs 13,318 more expensive than the already costly Honda Hornet 2.0. That’s a lot of money for a motorcycle with just superficial changes!

What Honda Has Done:

The most obvious change is the redesigned ADV-like half fairing with a tall windshield. The headlamp as well as the full-LCD instrument cluster (carried over from the Hornet 2.0) have been integrated into the fairing so that the fork is left free. For a more butch look, the plastic engine cowl, side and tail panels have been redesigned too.

Additionally, Honda has also raised the wide single-piece handlebar a bit to go with the revised split- seat design. This setup should offer a more comfortable riding stance than the Hornet, and should be perfect for highway runs. Topping things off, Honda has also equipped the motorcycle with a pair of MRF Zapper Kurve block-pattern rubber as opposed to the MRF Nylogrip Zapper units on the Hornet 2.0. This should offer superior grip on light trails. You can read more about the differences here.

The most basic step in making a bike adventure-worthy has to be revising the underpinnings. The CB200X already has a premium inverted front fork and rear monoshock, so Honda could’ve just tuned the suspension to offer longer travel to tackle difficult terrain effectively. Complementing this, Honda could’ve equipped the CB200X with at least a larger 19-inch front alloy wheel. These two alone could’ve gone a long way in not only improving the ground clearance of the motorcycle but also its handling off the tarmac. And for better protection, Honda could’ve provided a proper metal bash plate instead of the plastic one. The recently launched Honda XRE 300 (in Brazil) is a perfect example of how things should’ve been done.

But if Honda was actually serious about making a small-capacity ADV, apart from suspension and ground clearance, that 184.4cc single-cylinder air-cooled, fuel-injected engine would've also needed to be reworked thoroughly with completely revised gear ratios. Sure, the 17.2PS and 16.1Nm heart offers good bottom-end grunt, but if Honda were to justify the CB200X’s character, it would’ve had to tweak the engine’s final ratios for even better low-end grunt, and in turn better off-road dynamics.

But doing so will compromise its highway performance. There’s no such thing as a perfect motorcycle for every situation, so conversely Honda could’ve made the gearing taller to make it cruise easier on the highway. That would’ve also been a clear differentiating factor between this and the torquey urban-centric dynamics that the Hornet 2.0 is known for. Nevertheless, a differently tuned engine would’ve certainly brought a lot more to the table than just using the same motor with an ADV-themed facade.

Rounding off the ADV experience, Honda could also have equipped the CB200X with a larger fuel tank compared to the 12-litre unit that’s shared with the Hornet. This would’ve ensured a balance of form and function, what with the beefier fuel tank extensions. The digital instrument cluster could’ve also been enhanced with smartphone connectivity with turn-by-turn navigation, adding to its touring credentials.

With all these additions, a premium higher than the current Rs 13,000 could’ve also made sense as Honda would have offered a much more meaningful, well-rounded ADV than just a sheep in wolf’s clothing. Let us know what you think in the comments below.