How Different Is The Honda CB200X From The Hornet?

Is it a true-blue ADV or are the changes just skin-deep? 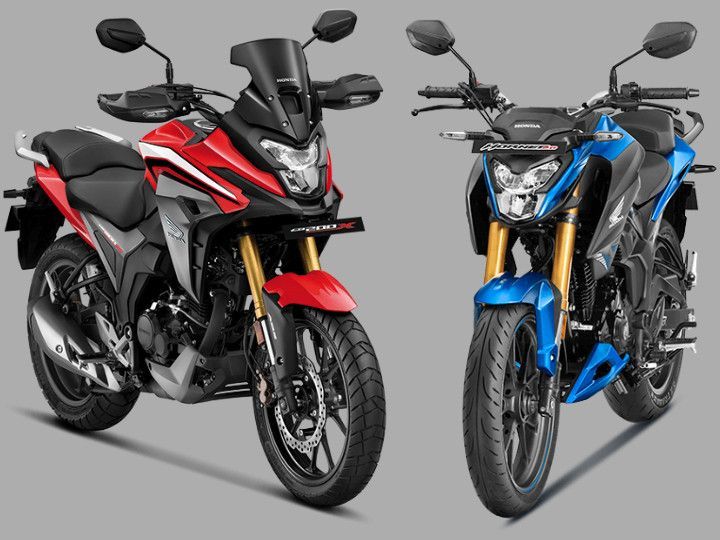 Honda finally entered the lucrative small-capacity ADV segment with the launch of its most affordable adventure tourer, the Honda CB200X. It’s based on the Honda Hornet 2.0’s platform, and at Rs 1,44,500 (ex-showroom Delhi), it costs Rs 13,318 more than the streetfighter. So what exactly do you get for the extra moolah?

The Honda CB200X looks properly buff, compared to the Hornet 2.0, thanks to its ADV-like fairing with a fairing-mounted LED headlamp, tinted windshield, and knuckle guards with integrated LED indicators. The fuel tank extensions are also beefier and so are the side panels and engine cowl. Even the tail panels are different but the two bikes feature the same X-shaped LED tail lamp, rear fender with number plate holder, and LED indicators. The new bodywork has made the bike heavier than the Hornet 2.0 by 5kg (147kg kerb).

Additionally, Honda has raised the single-piece handlebar for a more upright riding stance. The split seat has also been redesigned and appears to have better cushioning. This combination should ensure better comfort while touring. Having said that, the footpeg position has remained unchanged. At 810mm, the seat height is slightly on the taller side. That’s because comparatively, a hardcore ADV like the Royal Enfield Himalayan, with its much greater ground clearance, offers a 10mm lower seat than the CB200X. More about the Honda ADV’s ground clearance in the paragraphs below.

Honda has equipped the CB200X with MRF Zapper Kurve block pattern tyres, as opposed to the Hornet 2.0’s road-biased MRF Nylogrip Zapper units at both ends. This should offer better grip on light trails. However, tyre sizes (110-section front and 140-section rear) have remained the same.

Apart from the bodywork, ergonomics, and tyres, the rest of the motorcycle is pretty much the same as the Hornet 2.0. This includes the powertrain, suspension, brakes, and alloy wheels. The motorcycle gets the Hornet 2.0’s engine in the same tune (17.2PS at 8500rpm and 16.1Nm at 6000rpm), paired to a 5-speed gearbox. This isn’t necessarily a bad thing as the Hornet’s engine offers a healthy dose of grunt in the low-mid range, making it ideal for the CB200X’s demeanour.

The bike also uses the same inverted front fork and preload-adjustable rear monoshock, with the same amount of travel. Even the 17-inch alloy wheels at both ends have been carried over. As a result, the ground clearance has also remained unchanged, at 167mm. We really wish Honda had offered longer travel suspension with a larger front wheel. It would’ve gone a long way in making the bike more purposeful.

At 1,355mm, the wheelbase is also the same as the streetfighter. The brakes (276mm front and 220mm rear petal disc) have been carried over too, along with a single-channel ABS. Thankfully, the single-channel unit should let you have fun sliding around in the dirt.

Honda could've also increased the fuel tank capacity but sadly, it is still the same 12-litre unit as the Hornet. Even the LCD instrument cluster showing the gear position, battery voltage, clock, fuel level, and other run-of-the-mill information has been carried over from the Hornet. Smartphone connectivity with turn-by-turn navigation is sorely missed here.

All in all, asking for a Rs 13,000-odd premium over the Hornet 2.0 feels a little too much considering you don’t get a lot for the extra money. You’re better off buying the Hornet, or if you’re looking for a proper motorcycle to tackle the terrain, the Hero XPulse 200 is a much better, capable, feature-packed option, that too at a considerably lower price point.