From Yamaha’s most premium scooter to Ducati monstrous naked, this week was packed with launches 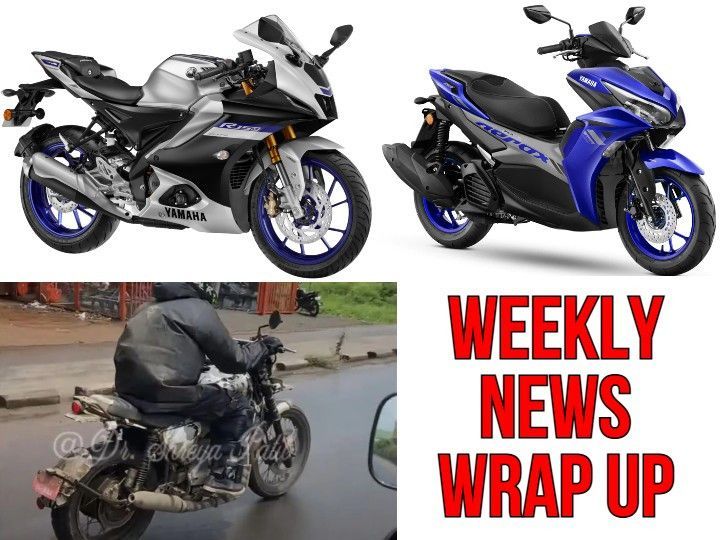 The last seven days have been quite eventful for the Indian two-wheeler industry, thanks to some interesting test mules, the launch of some internationally renowned products and even a global debut. Couldn’t keep up with all of it? Well, allow our weekly news wrap up to get you to speed:

Yamaha took the headlines this week by launching the all-new R15 V4 (which was a global debut, by the way) and the much-anticipated Aerox 155 in India.

With prices starting from Rs 1.67 lakh (ex-showroom, Delhi), the R15 V4 packs an all-new design inspired by the YZF-R7 along with a revised engine tune and traction control, a segment-first feature, as standard. Moreover, it also gets a new ‘M’ variant featuring a quickshifter. For full details about the new R15, check out our launch story.

The Aerox 155, meanwhile, starts at Rs 1.29 lakh (ex-showroom Delhi). It’s almost Rs 3,000 costlier than its arch rival, the Aprilia SXR 160. However, the Aerox justifies the money with much better power and torque figures as well as some more features. Head here for more details about it.

Ducati once again expanded its BS6 portfolio, this time by launching the 2021 Ducati Monster. Priced at Rs 10.99 lakh (ex-showroom, Delhi), the new Monster costs Rs 1.48 lakh more than its predecessor. The new asking price is courtesy a new design, frame, improved electronics, and a bigger 937cc engine drawn from the Multistrada 950. Interested? We suggest you check out our launch story first.

After its first sighting in March, the Yezdi Roadking was once again spotted on Indian turf. This time, it looked more mature, boasting a finished exhaust, LED lights, and a raised front fender, all of which suggest it could go into production pretty soon.

Accompanying the Roadking was a new ADV bike that looked similar to the Royal Enfield Himalayan. We believe this will be sold under the Jawa name to rival the Himalayan. The bike boasted big, dual-purpose tyres, a gaited telescopic fork, disc brakes fore and aft, and a fully digital instrument cluster.

Since its launch, the Aprilia SR 160 hasn’t seen many updates. This, however, is about to change as the updated SR 160 was spotted testing recently. We spied a digital LCD instrument cluster, same as the SXR 160, on the test mule. In addition, the new SR 160 is also expected to pack LED illumination and smartphone connectivity.

After TVS, Honda and Yamaha, Royal Enfield has now joined the motorsport bandwagon by announcing the Continental GT Cup. This retro track racing series will comprise four rounds and will feature in the JK National Racing Championship 2021. Selected racers will ride race-oriented Continental GT 650s, prepped by RE itself. To serve their purpose well, the race bikes make 5.8PS more, get a stiffer race-tuned suspension and weigh a whopping 24kg less. For details about the selection process and the racing series, here’s our dedicated story.