Based on the upcoming Interceptor 650 and the Continental GT 650, the custom bikes feature some interesting additions 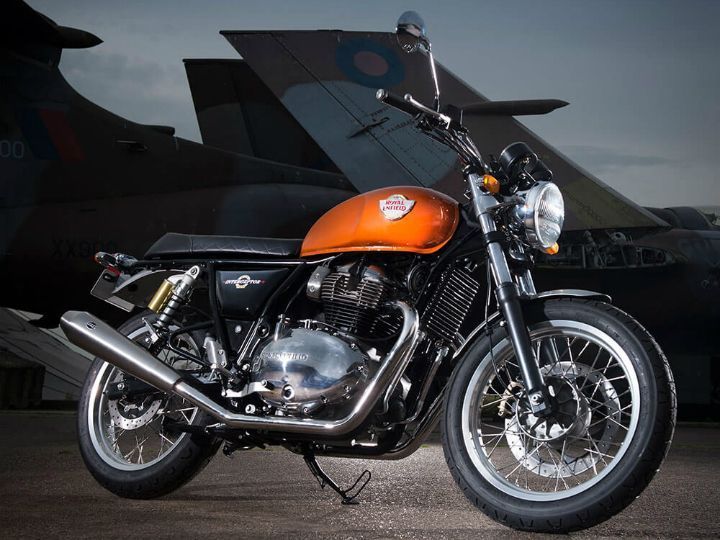 While we are whiling our time away waiting for the Royal Enfield 650 twins to finally hit showrooms, that hasn't stopped the Chennai-based manufacturer from showcasing three custom motorcycles - The Lock Stock, Rohini and The Interceptor, based on its twin-cylinder motorcycles at the seventh edition of the Wheels and Waves custom bike show in France.

While the Lock Stock and the Rohini are built upon the Continental GT 650, the Interceptor is based on, you guessed it, the Interceptor 650. Apart from the 865cc drag bike ‘Lock Stock’, which is build by RE themselves, the brand has collaborated with custom bikemakers Young Guns Speed Shop (Switzerland) and Old Empire Motorcycles (UK) to create the other two custom bikes, Rohini and The Interceptor.

As mentioned earlier, the Lock Stock is built by Royal Enfield themselves and is based on the upcoming Continental GT 650. Thanks to collaborations with S&S Cycles from the USA and Harris Performance from the UK, this custom drag bike packs an 865cc nitrous-injected engine, sourced from the Continental GT's 650cc engine. Oh, did we forget to mention that it also comes loaded with top-shelf underpinnings? This includes Ohlins USD forks, Brembo four-piston calipers and six-spoke alloy wheels.

The bike doesn't shy away from its cafe racer roots and features a low-slung design and lower fairing, coupled with a carbon-fibre tank cover. Completing the retro look is a cheeky 'Dazzle Camo' paint job, which takes a subtle dig at the manufacturer's tradition of camouflaging their prototypes.

The Rohini too opts for a cafe racer design, with a boxy tail section, flatter seat and a bulbous fairing at the front. To help finish the look, the bike maker has covered the bare aluminium bodywork with a reflective paint scheme.

3) The Interceptor by Old Empire Motorcycles

As the name suggests, this custom build is based on the upcoming Interceptor 650. However, Old Empire Motorcycles seem to have taken the concept quite seriously and have stripped the motorcycle right down to its bare essentials. This clean look is further enhanced by hiding the wiring and internalizing the controls. This includes hiding the brake and clutch levers with internalised controls like twist-grip clutch and throttle. The front and rear brakes have been integrated with a fully adjustable proportioning valve.

The bike features a lower stance and comes with a blacked-out motor. The dark metallic red finish with oxblood leather and Alcantara seat trim adds to the look. Interestingly enough, the bike also features keyless ignition and can also be activated by matching riding gloves.