Production-spec 2020 Mercedes-Benz GLA Spied Inside Out 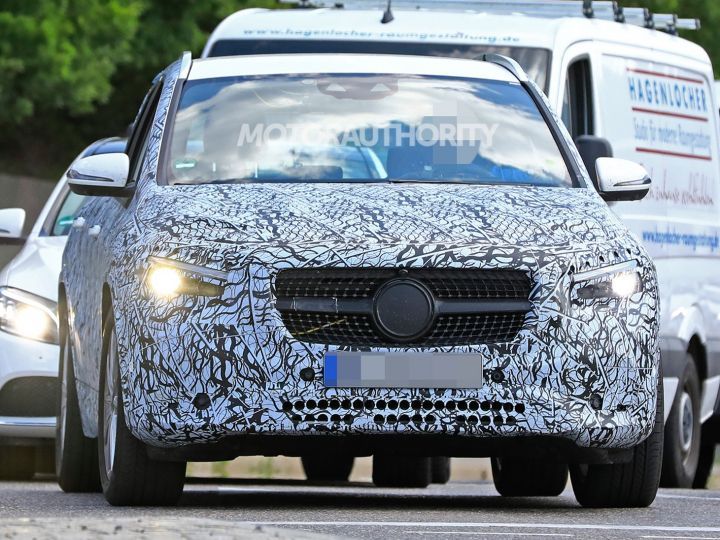 Mercedes-Benz’ entry level SUV, the GLA, is all set to get a generation change. Spied testing in its production-spec form overseas, this is the first major update for the GLA. The 2020 GLA gets revised styling, a brand new interior and is heavily based on the 2019 A-Class.

From the spy shots, it seems clear that the GLA is basically an A-Class on steroids. The sleek headlamps with the Mercedes ‘Eyebrow’ DRLs and front grille seems to be a direct lift. It is also expected to get a sporty looking bumper to complement the front-end. In profile, the sleek 10-spoke wheels and squat stance makes it look like a crossover rather than an SUV. At the rear, the GLA now gets new split-LED tail lamps with new design elements as seen on the recently unveiled GLB SUV.

Inside, the GLA follow Mercedes’ latest design language and look almost the same as the 2019 A-Class. Gone is the huge cluster of buttons on the central console, replaced by two digital displays that take on the role of the instrument cluster and infotainment system. The latter is likely to be a touch-based unit and is expected to feature the company’s signature MBUX user interface. Below the infotainment screen are three circular air vents and controls for them.

The 2020 GLA will be based on the MFA2 (Mercedes Front-drive Architecture) platform as other front-wheel drive cars from the manufacturer. Under the hood, the 2020 GLA is expected to share its powertrains with the A-Class and the GLB SUV. Lower-spec variants are expected to be powered by a 1.3-litre petrol unit that churns out 163PS and 250Nm. This engine comes mated to a 7-speed DCT in other Merc models. The higher-spec petrol variants are expected to be powered by the 2.0-litre turbocharged unit from the A-Class that puts out 224PS and 350Nm. It is expected to come with an 8-speed DCT as well as Mercedes’ 4-MATIC all-wheel drive system. Diesel lovers can expect a 2.0-litre diesel in two states of tune - 150PS/320Nm and 190PS/400Nm.

A spicier AMG variant is also expected to be launched, albeit at a later stage. Expected variants are GLA35 with 302PS and a more bonkers GLA45 with up to 416PS on tap.

The 2020 Mercedes-Benz GLA is expected to debut at the upcoming Frankfurt Motor Show this September, and go on sale in international markets early next year. Prices are expected to start a wee bit more than the A-Class ($33,495 or Rs 23.08 lakh, excl. duties) in the United States. Considering the current-gen GLA is getting quite old, we expect Mercedes to launch the latest model here to give the nameplate a fresh lease of life.