New Hyundai i20 vs Rivals In Pictures: Baleno Edition

How does Hyundai’s latest offering match up against Maruti’s simplistic premium hatchback? Let's find out 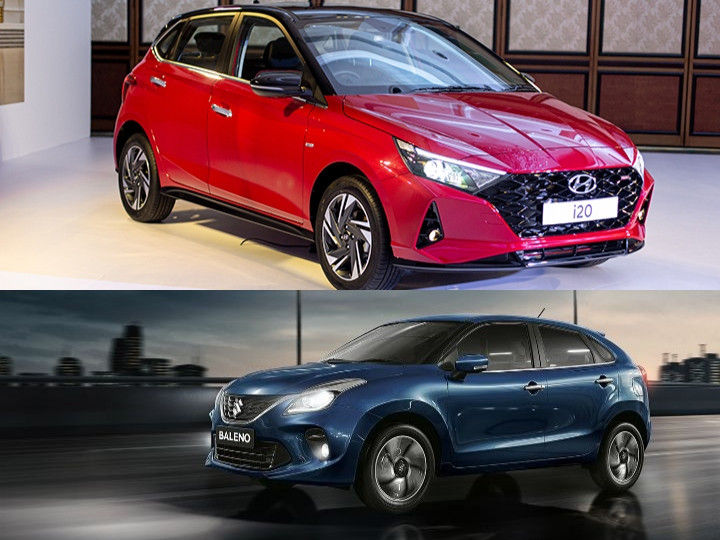 The premium hatchback segment recently saw Hyundai launch its third iteration of the i20 in India. As a whole, Hyundai has given quite the generational upgrade to the i20 with an eye-catching design, modern features and a variety of engine and gearbox combinations. But how does it compare to the simplistic Maruti Suzuki Baleno? Here’s a closer look:

The i20’s upgrades include an aggressive overall silhouette, a single-piece cascading front grille flanked by LED projector headlights and LED DRLs. Z-shaped LED taillights and 16-inch alloy wheels round off the design.

On the other hand, the Baleno gives off a more neutral stance, with an aggressive bumper and neat grille up front. It also gets LED projector headlamps, 16-inch alloy wheels as well as LED tail lights like the i20. But the latter’s taillight and alloy wheels look a bit more modern.

Improvements to the new Hyundai i20 have put it on fairly equal footing with the Maruti Suzuki Baleno, with the two hatchbacks matched in length. But the i20 edges ahead in width and wheelbase. On the other hand, the Baleno continues to be the taller of the two and has greater boot space at 339 litres compared to 311 litres in the i20.

Heading inside, the new i20 has seen an overhaul in the form of an all-black theme, leather upholstery, Audi-like faux AC vents and the Creta’s four-spoke steering wheel. Overall it's more in line with modern designs of today. It also gets interior trim options of copper inserts and stitching, or red inserts for dual tone variants. On the other hand, the Baleno sports a simplistic design and black seats combined with blue inserts.

The Baleno covers the key necessities for the segment, with a 7-inch touchscreen infotainment system with Apple CarPlay and Android Auto, auto climate control and rear AC vents. But its simplicity does make it lose some premium bits like connected car technology, wireless charging, a semi-digital instrument cluster, and ambient lighting.

Under the hood, the i20 edges out with the 1.0-litre turbo and is also offered with a diesel powertrain, an option that isn’t present in the Baleno. The i20 also gets more transmission options in the form of a CVT, 7-speed DCT, and 6-speed iMT. In contrast, the Baleno is offered with a 5-speed manual and a CVT option, but that option isn’t available for its most powerful variant. That said, the 1.2-litre Dualjet petrol comes with Maruti Suzuki’s Smart Hybrid technology which packs in functions like start-stop and torque boost for additional fuel economy.

Overall,both hatchbacks have their pros and cons. If you’re up for a plethora of creature comforts and willing to shell out a hefty premium, then the new i20 is the go-to hatchback. But if you can make do with just about adequate necessities and more boot space on a budget, the Maruti Suzuki Baleno is the more preferable option.