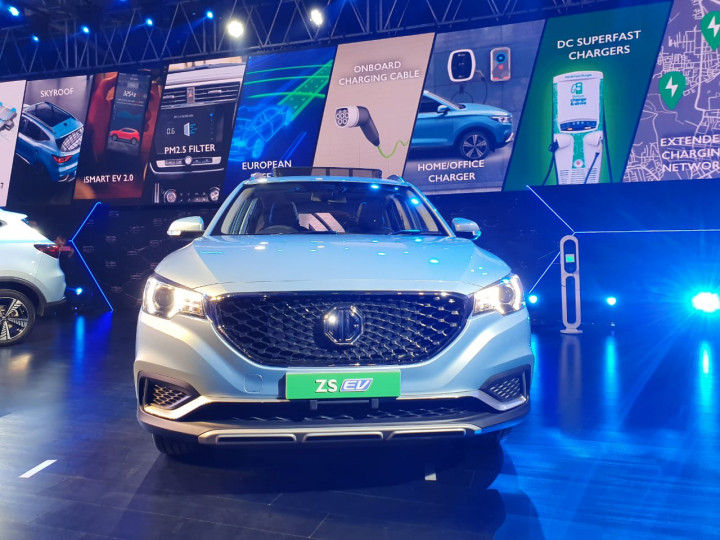 MG Motor India has taken the wraps off the ZS EV, its second model for India after the successful Hector midsize SUV. The ZS EV is an all-electric SUV that’ll rival the Hyundai Kona Electric. It’ll be available in five cities initially: Delhi-NCR, Hyderabad, Mumbai, Ahmedabad and Bengaluru. Morris Garages has installed fast chargers at various locations across these cities. Dealers have started accepting orders for the ZS EV for a token of Rs 50,000. Prices are expected to be around Rs 25 lakh (ex-showroom).

The ZS EV can be instantly recognised as a MG thanks to its large chrome-studded grille and projector headlamps. At the side, a shoulder line starts from the headlights and flows through the profile, adding character. Elements like the body cladding and 17-inch dual-tone alloy wheels add to the premium factor. At the rear, the ZS EV comes with split LED tail lamps and skid plates.

Clearly, the ZS EV is the larger SUV here despite it having a 21mm smaller wheelbase than the Kona Electric.

Inside, the ZS EV comes with a minimalist dashboard with stylish elements like the round air con vents and a chunky 3-spoke steering wheel. The central console house an 8-inch touchscreen system while the air con controls below it are physical knobs. Then there is the lower central console which comes with a rotary gear knob and toggles for the drive mode. The cabin is finished in an all-black shade while piano black and silver trims spruce things up.

Powering the MG ZS EV is an all-electric motor that develops 143PS of power and 353Nm of torque. The ZS EV is capable of doing 0-100kmph in 8.5 seconds. It draws power from an IP67 rated 44.5kWh battery pack packed under the floorboard of the SUV. MG claims the ZS EV offers a real world range of 340km on a single charge. There is a regeneration function on offer where it recuparates energy while deceleration and charges up the battery pack. Its battery pack also offers fast charging and can juice up from 0-80 percent in 50 minutes. MG also offers a 7.4kWh wall box charger that can be installed in your parking as standard with every ZS EV. It's capable of topping up the battery pack from nought to 100 per cent in 6 to 8 hours.

The MG ZS EV is slated for an official debut in January 2020. Prices are expected to be in the range of Rs 25 lakh (ex-showroom). When launched, the ZS EV will lock horns with the Hyundai Kona Electric.

Stay tuned to ZigWheels for the first drive review of the ZS EV.