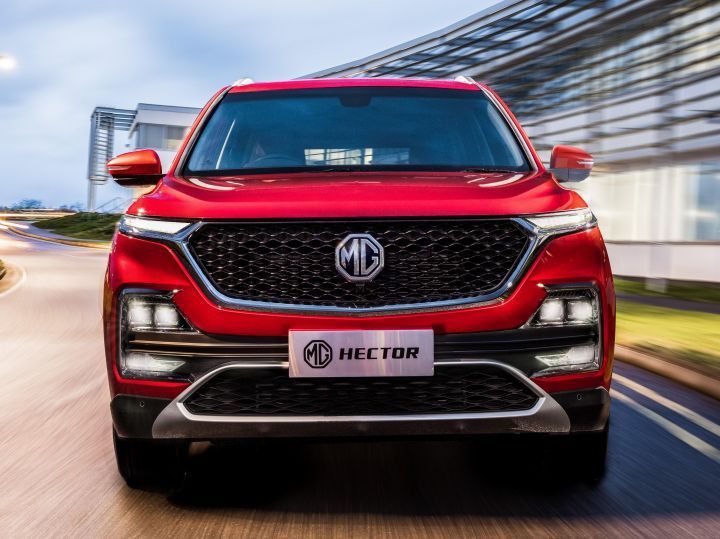 The much anticipated MG Hector is set to be unveiled tomorrow. The Hector marks MG Motor’s debut in India and as such, it is also responsible for the brand’s initial perception in the country. Of late, the SUV has been in the limelight owing to various sightings in different parts of the country without any camouflage. Even though a lot of information about the SUV was leaked or revealed at various stages, we expect to get more detailed information about the Hector tomorrow. MG has already commenced production of the SUV at its facility in Halol, Gujarat. Previously owned by GM, this facility has an initial production capacity of 80,0000 cars.

Based on various spy shots, we can safely say that the Hector looks quite upmarket and has a fairly large footprint. Two variants of the SUV has been spotted till now. The top-spec variant comes with oodles of chrome accents on the exterior. The lower variant makes do with silver inserts on the grille, lower bumper and window line. The lower variant was also spied with a different single tone alloy wheel in comparison to the dual-tone wheels in the higher variant. The lower variant also gets an all-black hexagonal mesh grille instead of the top variant’s chrome unit. The MG logo sits bang in the middle of the grille. What we have also noticed is that the lower variant seems to be amply loaded with projector headlights, LED daytime running lights, roof rails and ORVMs with integrated turn signals.

Under the bonnet, the Hector is likely to pack a Fiat-sourced 2.0-litre Multijet diesel engine that produces 173PS of power and 350Nm of torque, which is similar to the diesel Jeep Compass output. This engine will be mated to a 6-speed manual transmission at launch. The petrol engine is expected to be a 1.5-litre turbocharged unit with expected figures of 143PS and 250Nm. The petrol motor will also get the option of a DCT (dual-clutch automatic).

Meanwhile, MG has been promoting the connected features of the SUV, which is a first in the segment. Dubbed iSMART, the system uses an in-car Android-based 10.4-inch  tablet featuring 4G (5G-ready) connectivity and OTA (over the air) updates. Android Auto and Apple CarPlay are also supported and it also gets a Gaana and Accuweather premium account for free.

The system  supports a host of functions in the SUV, including features like emergency calls, vehicle status, remote control for the sunroof, tailgate, door lock, and a whole lot more, which you can find out here. Other standout features include a 360-degree camera, auto day/night IRVM, a 7-inch fully digital instrument cluster and a large sunroof.

Set to be launched in June, the SUV will lock horns with established rivals like the Jeep Compass, Tata Harrier and the Hyundai Tucson in India.  Stay tuned while we bring you more information about the SUV right after the official unveil tomorrow.