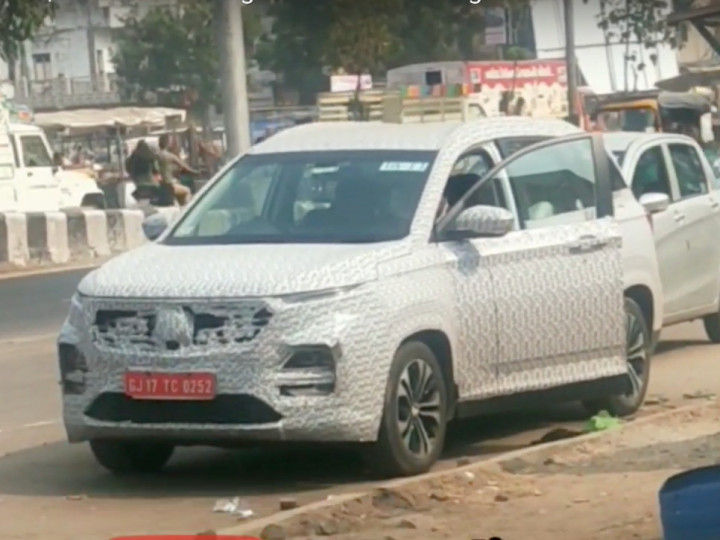 The Hector, Morris Garages’ debut product in India, has seen reasonable success. The carmaker was quick to launch a more premium six-seater, the Hector Plus. Now, it looks like MG could give the Hector yet another update as the facelifted model has been spotted testing again.

The facelifted Hector’s front end seems to be in tune with the premium Hector Plus. It gets a redesigned honey-comb mesh grille, flanked by the same split LED headlamps. The black plastic strip on the bumper is likely to be dropped, giving it a cleaner look. In profile, the facelifted Hector was seen with new 5-split-spoke dual-tone alloy wheels, which are possibly 18-inches. They fill the wheel arches nicely and give it a nice stance. The rear end, though, is likely to be similar to the existing model.

We are yet to see the facelifted Hector’s interior, but MG could spruce it up by offering different materials or upholstery colours for a premium look. The feature list is likely to be similar, with highlights being a 10.4-inch touchscreen infotainment system with Apple CarPlay and Android Auto, connected car tech, a panoramic sunroof, ambient lighting, automatic climate control, powered driver’s seat, and an Infinity sound system. Safety is covered by six airbags, ABS with EBD, parking sensors, and electronic stability control.

We expect no changes to be made under the hood of the facelifted Hector. It should retain the existing 170PS 2.0-litre FCA-sourced diesel and 140PS 1.5-litre turbo-petrol engines. The latter can also be opted with a mild hybrid system for additional torque boost and start-stop functionality. A 6-speed manual gearbox comes as standard while the DCT is limited to just the turbo-petrol engine.

The facelifted Hector is likely to be launched in 2021. Considering the updates, we expect it to command a slight premium over the current model which is priced from Rs 12.83 lakh (ex-showroom). The facelifted Hector will renew its rivalry with the Hyundai Creta, Kia Seltos, Tata Harrier and Mahindra XUV500.