MG Hector - a little known British name pasted onto on a China-sourced offering. How does it plan to cosy up to India’s SUV lovers? 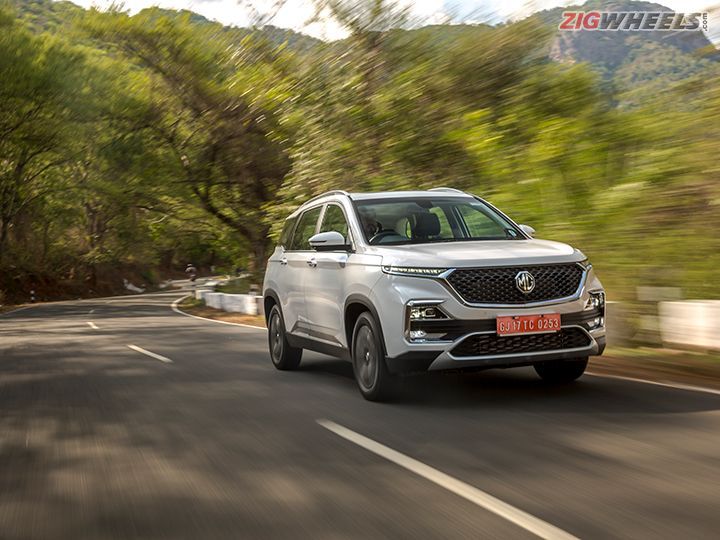 Did you ever change schools or cities and start life from scratch? If so, you might understand what the Hector is going through. This XL-sized SUV from MG is hoping to make friends and earn its place in a community. It is a tough gig as MG has to establish its British credentials while downplaying its undeniable Chinese connections. We at ZigWheels choose our friends and our vehicles on who they really are, not where they come from. Now that we have driven MG’s rival to the Tata Harrier, Mahindra XUV 500, Hyundai Creta and Jeep Compass, let’s see if it can win some respect.

Announcing its arrival is taken care of by the MG Hector’s genes. It has the right mix of aggression and ornamentation for a modern-day SUV. Those LED DRLs sparkle brightly as they are squeezed against the hood. The generous but tasteful use of chrome as it cradles the large grille and arcs around the fog lamps adds to the glitter effect. Then there are the all-LED headlamps and tail lamps which are available in all variants except for the base! The ORVM-mounted turn indicators, skid plates and roof rails ensure that even the base variant doesn’t look barebones either!

The Hector isn’t a true MG in the sense that it is not small and sporty. That should come as no surprise as the Hector is essentially the Baojun 530 sourced from MG’s parent SAIC. It is also badged as the Chevrolet Captiva and Wuling Almaz in other markets. It dwarfs other MG SUVs and its competition here in India too. Incredibly, it is longer than the Tata Harrier by a solid 57mm. That is an incredible stat, considering that the Harrier is larger than the Honda CR-V!

But, like the tall kid who doesn’t quite inspire awe because of being a bit stretched and gangly, the Hector’s design fumbles ever so slightly. Its overhangs pronounce the length and the 17” wheels seem tiny in the large and flared wheel arches. The 215-section rubber doesn’t help either. Its slim width (relative to its length) and the sloping roofline also give it an MPV-like air.

From the rear, the Hector has some striking similarities to a German brand’s SUV design. The clamshell bonnet and tail lamps that fan out have a Q-factor to them. Get it? Despite the slight gangliness or its derived design, the Hector comes across as a head-turning SUV.

Step into the cabin and most concerns regarding the Hector’s China connect will be calmed. The all-black theme and the simple design instils a sense of modest premiumness. The elongated boss with the chunky 3D-finished chromed and the large and sturdy buttons embody this well.

This also extends to the dashboard, be it the clean design, the subtle chrome accents or the splashes of leather. The chunky and stubby gear lever also feel pleasing to use. The materials feel tough and even the shut lines are consistent. However, the Hector stops short of delivering a VW-esque vibe of premiumness or Hyundai levels of consistency. You could blame the wrinkles in the leather wrapping or tackiness in the contrast stitching for giving our finickiness something to latch onto.

However, the sense of space in the cabin is incredible and details like the footwell space and centre console design are such that you won’t feel cramped. The large windows increase the sense of space further. However, in terms of ergonomics, despite the adjustable seats and the tilt and telescoping steering, finding the right seating position proved to be a bit challenging, with under-thigh support and lack of lateral support proving to be an issue with drivers of different sizes.

The rear seats also offer an abundance of knee room and headroom, despite packing a sunroof. The recline adjustment on the split seats and the flat floor increases comfort levels and adds some flexibility. For a higher comfort quotient, you also get rear aircon vents and charging sockets as standard! However, like in the front, the under-thigh support is a bit lacking and the sense that you are sitting a bit close to the floor, like you would in a body-on-frame SUV, creeps in. Also, if you opt for the petrol-hybrid powertrain, there is no room left for second-row passengers to push their feet under the front passenger seat as the additional battery is stowed there.

The Hector will be available with a third row of seats in 2020; for now, what you get is a 587-litre boot. It is wide and deep but a bit shallow. Strangely, there is some storage under the boot floor for soft luggage whereas the spare wheel is mounted under the body.

Like the persistent new guy, the Hector has a loaded goodie bag to tempt you to spend some more time with it. Even the base Style variant packs a height-adjustable driver’s seat, height-adjustable front seatbelts, power-adjustable ORVMs, remote key, rear wiper and washer, rear defogger, recline-adjustable rear seat with 60:40 split, three-point seatbelts and adjustable headrests for all occupants. And there is a 4-speaker music system with all the connectivity options too!

The step up to four airbags happens in the Smart variant. Which also brings in tilt and telescopic steering, a subwoofer, amplifier, push-button start, power-folding mirror, tyre pressure and four airbags. The top variant, Sharp, adds rain-sensing wipers, auto headlamps, a powered tailgate with remote opening, the huge sunroof and six airbags. Amongst other things, the top end variant we were driving came with 4-way power-adjustable passenger seats (except petrol-hybrid) and 6-way power-adjustable driver’s seat. The 7” MID offered here is hard to read in bright sunlight, but otherwise offers easy access to information on tyre pressures, music and navigation.

Taking centre stage in the cabin is the 10.4” infotainment system, which proved to be considerably snappier than before and didn’t mar the usability this time around. It also
displays the handy 360-degree view, making it easy to reverse this behemoth out of parking spots. However, the inbuilt navigation felt unhelpful and couldn’t find destinations. The voice command system was also hit or miss, but helpful nonetheless as it reduced the need to take hands off the steering wheel. We found ourselves using commands to control the climate control system and the sunroof quite often. It misses out on a wireless charger like on the Hyundai Creta, and the Harrier’s JBL sound system is nigh unbeatable, but the Hector’s Infinity sound system is properly enjoyable, crisp and very, very loud!

The Hector uses a SIM to keep the car connected to MG’s servers, through which many features like car tracking, geofencing alerts, remote engine start (auto only) and many others can be operated. However, in our books, the key benefits are served by the iCall feature that allows emergency services to contact you instantly in case of an accident in which airbags are deployed. The iSmart phone app also allows you to check on the Hector and shares a lot of useful information. However, the inconsistency in operating features or commands from the app makes it less of a tool and more of a gimmick.

The Hector is capable of taking on two roles: the slick city mobile or the punchy all-rounder. For the former, the 1.5-litre four-cylinder turbo-petrol with mild-hybrid tech fits the bill very well. The 140PS engine doesn’t start to shudder or rattle even when you pull from 1000rpm in a higher gear and doesn’t get coarse as you rev it up. Even when you accelerate from low speeds, the 48V hybrid system delivers a light kick to get you going, which means fewer gear changes for city commuting or calm cruising on the highway as the power flows in one wave. Not that you won’t enjoy changing gears as the clutch is light and the shift has a meaty mechanical feel to it.

However, there are a couple of things you will have to get used to. First, there are small spikes and troughs in power delivery, and can catch you by surprise. Second, for high-speed overtakes you will have to downshift to lower gears as the petrol engine takes long strides in each gear, with first good for about 50kmph, 2nd over 80kmph and 3rd hitting near 130kmph on the speedo! No doubt this is done with fuel efficiency in mind, which MG claims is 13.96kmpl for the six-speed manual that we drove. MG claims 14.1kmpl for the non-hybrid dual-clutch version, however, it wasn’t available for us to sample on this drive.

The diesel engine is clearly the punchier option for highway cruises. The two-litre engine’s 170PS and 350Nm may sound familiar as it is identical to the Jeep Compass since it is sourced from Fiat. Unsurprisingly, despite the fine-tuning, the engine for the MG it feels familiar. It can trundle around from 1500rpm but the real bump in torque comes from 1800rpm. The engine revs easily to its near 6000rpm redline.

No. The Hector’s dynamics are tuned towards a sensible and calm driving style. It absorbs poor roads very well and tackles the SUV aspect very well. However, despite the monocoque construction, it feels more like a tall body-on-frame SUV. It tends to roll a bit into corners and the narrow 215-section tyres start to protest quite early. The lack of feedback from the steering suggests you back off too. Commendably, MG is focussing on playing things safe by offering the Hector with Electronic Stability Program, Traction Control System, Hill Hold Control and ABS with Electronic Brake Force Distribution as standard. So, if you are looking for a fun to drive SUV, the Hector won’t hit the spot. However, the all-wheel disc brakes provide good stopping power. The bite on the petrol-hybrid with the regenerative braking feels much sharper than on
the diesel though.

As an SUV, it packs 198mm of ground clearance (unladen), which is lower than the segment benchmark. Also, its long wheelbase and overhangs mean you should take some care when rough-roading. And no, there is no 4x4 version on offer.

If you take away the flashy exterior and the gimmicky promise of “Internet Inside,” the Hector has indeed surprised us with its sensible, middle-ground approach as a family SUV. It has a spacious cabin, a set of easy to drive engines and safe but unexciting dynamics. The cabin quality is reassuring, however, it needs to step things up a notch or two to really bring in a sense of quality to rival the competition from VW or Hyundai.

So the Hector, an SUV with a lot of promise, is off to a very strong start. At Rs 12.18 lakh - Rs 16.88 lakh (ex-showroom India), it offers excellent bang for the buck, delivering luxury car tech backed by impressive practicality and usability. MG is also addressing longevity concerns by offering a strong 5 year/unlimited kilometre standard warranty along with a tempting buyback program (60 per cent of the car’s value after 3 years). So as a balance of need and greed, the MG Hector seems to be a step in the right direction.