I Just Achieved My Dream!

This break was just what I needed after sitting at home and staring at my laptop for more than ten months! 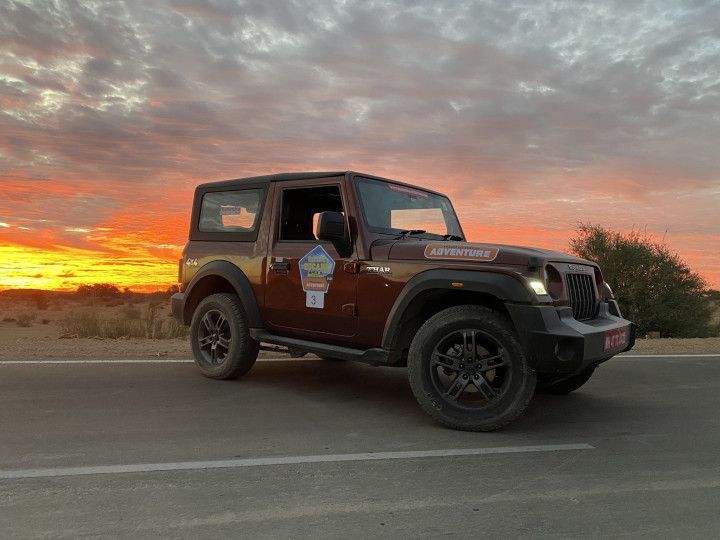 Life as an automotive journalist isn’t easy. All those fancy videos you see take years of hard work. Making things even worse is the fact that I couldn’t test a single car for almost a year as I’ve been locked at home in Madurai due to the pandemic. When the golden opportunity struck in the form of Mahindra’s Royal Escape in the new Thar, I, without hesitating, said yes.

The Mahindra Royal Escape takes place in Rajasthan, a state known for its diverse culture, topography and gobsmackingly good food. It’s an unexplored piece of earth I’ve been dying to visit since I became mature enough to do solo trips. Bags packed, on January 11 I flew out from Madurai to Mumbai and onwards to Udaipur, where the drive was to be flagged off. First day was nothing more than a briefing. We’ll be covering three important cities on this trip: Udaipur, Jodhpur, and Jaisalmer.

It also gave me an opportunity to interact with fellow journalists and the Mahindra Adventure team. Called it a day after a hearty dinner of “laal maas,” piping hot seekh kebabs and rotis as we had an early morning start the next day.

Before I proceed, let's state the obvious: this story is about ‘The Royal Escape’ experience; it's just a great coincidence that we did it in the Thar. We have done three extensive reports on the Thar itself and you can read them at these links below:

It’s day 1 and we’ll be heading from Udaipur to Jodhpur, covering a distance of around 350km. A quick flag-off and socially distanced photoshoot later, it was time for me to experience Mahindra's off roader for the first time! I needed some getting used to. I was driving the diesel-automatic with the hardtop which had pretty sharp brakes. Gauging its width was also an initial problem but after 10 minutes, I was confident enough.

Our first stop was at Shikarbadi fort, a former hunting resort of the Royal family of Mewar. The property is huge and houses its own stable, a football field and a mini air strip capable of landing small six-seater planes! It’s now converted into a 3-star hotel after the Zamindari act came into place in 1971.

We met Lakshyaraj Singh at the hotel, the prince of Udaipur, an avid automobile enthusiast whose car collection includes 4 Mahindra Jeeps, including 2 Thars. Mr Singh advised us to visit the Vintage Car Collection museum and it’s our first encounter on Udaipur’s narrow streets, which was a tricky experience. The roads were broken and the traffic was unruly. But thankfully, the Thar had its own appeal here. It’s a pehelwan of a car and people are quick to give way to let it pass. A quick appreciation must be made to the auto box, which is smooth and served the right gear at all times.

Post the visit, the highway towards Jodhpur took a good one hour thanks to Udaipur’s unruly traffic. The traffic was awful, so let’s fast forward to the pleasant bit of driving the Thar on open roads. Driving in a convoy isn’t the most exciting thing as you need to follow the lead at capped speeds.

But driving slowly also had a few positives: The Thar’s cruising ability is brilliant, making it an ideal long distance companion. The scenery kept changing as the miles tumbled. We passed through the Aravali hills range, which offered magnificent views. I wanted a break to soak in the view, but driving in a convoy meant you just can’t do that. Eventually nature’s call meant I needed to take a pit stop ahead of our diversion to the Jawai leopard sanctuary.

It was a 40km drive through narrow broken roads to reach Jawai’s start point and then there’s the road itself, which is infested with cattle rather than vehicles.

If you ain’t careful, you might be having a delicious portion of mutton biryani! But this is a part of experiencing rural Rajasthan. We soon reached our start point inside Jawai and were instructed to put the Thar into four low. The track was initially easy, but what lay ahead got my head scratching as we needed to attempt an almost 60-degree slope on a slippery rock to the top. I gulped for a second and was about to give up!

Took a deep breath, slotted the gear lever into D, and let go of the brakes -- the Thar moved ahead briskly and I just needed to keep a steady throttle to keep it going. Despite the slippery surface, it didn’t lose traction and I reached the top without any incidents. I felt victorious. Boy, what a machine! Tough roads take us to beautiful places and it was no different. Just look at the view:

But this was one part of the story. We needed to come down a slope that's equally sharp. But the Thar, with its four low and super short first gear meant I just needed to monitor steering inputs while it crawled down.

We headed towards our chai break spot, which was at the heart of the Jawai sanctuary. While we couldn’t spot any leopards, we had a rather surprising visitor waiting to see us: a crocodile.

The chai break location, which was on the banks of the Jawai river, was insanely pleasing. I perched the Thar on top of a rock and the view out of my cockpit was just blissful. I wished I stayed forever, but we had to head to our next stop: Jodhpur. It was an uneventful evening post the sanctuary drive and we reached Jodhpur at around 11pm.

It's the second day of The Royal Escape and we inched towards Jaisalmer. We had a leisurely start as we drove through long straight highways with less traffic. The open roads tempted me to gun the Thar, but plenty of speed checks meant I needed to keep my excitement under control. The surprise cattle encounter also meant caution was of essence.

The highlight on this leg, though, was overtaking a convoy of 60 army trucks. Knowing that I needed to have power served up at the right time, I slotted the gearbox in M and decided to take charge. The army drivers were kind enough to let us through when there was a gap to overtake. Our lunch stop was at Dechu, which is around 170km from Jodhpur and by evening we checked into our stay at Jaisalmer. This day was uneventful, but what lay ahead had us excited.

The next day began even more leisurely at 12pm. For most of the auto journos, this meant a late morning start, but I was excited because it gave me an opportunity to explore Jaisalmer. A quick word with the Mahindra team got me the green signal to explore Jaisalmer in the Thar itself. So I decided to wake up early and explore the city all alone, something which I love to do, though to my surprise two of my friends decided to accompany me.

Getting up early has its own perks. I witnessed one of the best sunrises in my life. We headed to Jaisalmer fort before the crowd gathered and since there was no one to stop at the checkpoint, we wasted no time and drove through the narrow gully to the top. The width of the road was just enough to fit the Thar but after being extremely cautious, we reached the summit.

Jaisalmer Fort, built by Rawal Jaisal in 1155AD, is still one of the few inhabited forts in the world. The fort is thronged by thousands of visitors everyday, but I got to see its best since I was the only one in the morning. Soon after the Fort, we headed to Gadisar lake for a quick photo-op and came back to the hotel.

The real action, though, starts from here as we head to the dunes. The tyre pressure was lowered to 20PSI as they needed a wider contact patch for better grip on the sand. If you want to know my experience in one word: Speechless. But from here, let’s shift our focus to the Thar as we’re driving it on its home turf for the first time.

The Thar I drove was the diesel-automatic variant and it made my job easier on the sand. The golden tip behind driving on dunes is speed and power. Have decent momentum and you won’t get bogged down, but if you do, don’t accelerate forward. Back up, and attempt it again with more speed.

I switched to four low, slotted the gear lever into manual and short shifted it into third. From here, the Thar was an animal of its own. All I needed to do was to focus on the path and shoot my way through; the car’s electronics and hardware took care of the rest and I was up the dune within the blink of an eye. But the Thar’s manual mode has a disadvantage: it will shift down on its own if speed reduces and since first gear is super short, it robs away momentum and you could get bogged down.

But apart from this, it performed exceptionally well on the sand. I also put its breakover angle to the test when I slid down a dune (a mistake made by me). And this was when Vinod from Mahindra Adventure gave me a golden tip: Always ride the terrain, don't climb back up if you’re sliding down. Doing so will topple your car, so always ride down the dune.

After hours of dune bashing and fun, I witnessed one of the best sunsets I had ever seen in my life. Post that we did a bit of soft roading to our dinner location, which was in another set of dunes. Needless to say, there was a cocktail party along with local Rajasthani cuisine. And as I was sipping my drink, a look at the sky revealed a blanket of stars, which was absolutely magnificent. One of the best days in my life to say the least.

It’s day four of our drive and we headed back to Jodhpur, where we bid farewell to the Thar and the Mahindra Adventure team. We took a slightly different route and came via Osian, a small town where we had some delicious Rajasthani cuisine. It was largely an uneventful drive.

But all this while, I did some interesting things which I have been dreaming about since my childhood days. Go on a long distance road trip, make some great memories and friends on the way, do crazy things, and eat some amazing food. This trip just made me realize that I had achieved my dreams!

A huge shout out to the Mahindra Adventure team as everything was well organised and we got to experience the best of Rajasthan.