Can the jungle warrior find its place in the urban jungle? 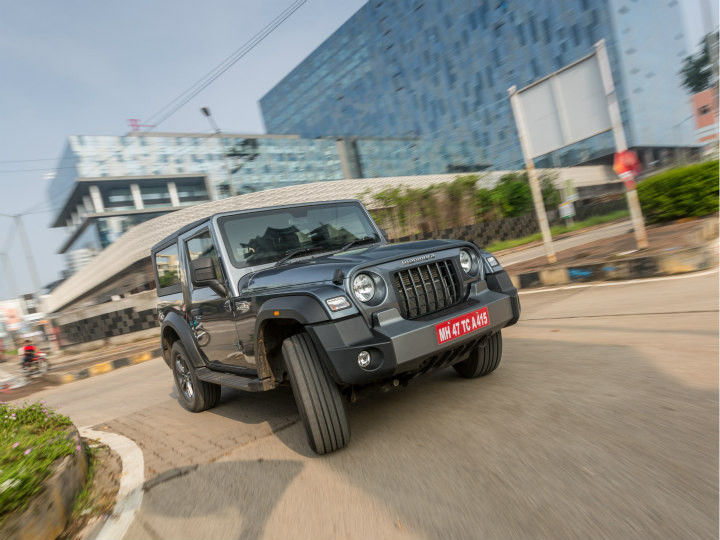 The Thar has always been a warrior at heart. Going places most other cars can’t go, doing things most other cars can’t do and most importantly, taking a beating and still getting up, shaking the dust off, and simply moving on to the next challenge. But like any warrior, the Thar faced its biggest challenge when the war was over and it was time to go back home. The older Thar was a veteran who simply couldn’t adapt to that life. It longed to be back out in the wild. The new Thar promises to change that.

Putting on the Party Clothes

The Thar’s boxy design stays in place, but it has grown bigger. It’s now 85mm longer and 129mm wider when you compare the top-spec variants of both generations of the Thar. The one place it has lost some ground is height. The new car is 28mm shorter when it comes to the soft top version and a mammoth 86mm shorter when you compare the hardtop version to the older car. That’s not a bad thing, though as a shorter height will definitely work towards bringing the centre of gravity down, giving the new Thar better high-speed manners.

And while the design language might hark back to the old Thar, the Thar in itself looks quite new. The paint quality seems much better than before, the wider bonnet gives it more road presence, and while onlookers gave the old Thar one look and went back to minding their business, the new Thar manages to capture their attention for a lot longer. To put it simply, the Thar has replaced its camo-clothing with a neatly pressed civilian attire.

The insides tell a similar story. For starters, you now have proper forward-facing rear seats so you can be ferried around without feeling like a prisoner. The quality of the seats is great too. All the seats have apt cushioning and the front seats have raised edges to hold you in place. While this does hold you snug in place, larger people could potentially face the issue of not fitting in these seats. The fabric construction of the seats keeps you comfortable and the leather-like material on the edges not only looks good but also allows them to grip you properly.

The build quality too has been upped. Yes, hard-plastics still exist inside the cabin and if you look closely at the lower half, you can see them with your bare eyes rather than feel them with your hands. But overall, the fit and finish of the Thar’s cabin has been improved to such an extent that you can live with it on an everyday basis.

Can You Take It to the Mall and Back?

When your cousins come over for the summer holidays, you know they will want to visit the mall to catch a movie and the Thar can now fulfill those duties. Those forward-facing rear seats mean the Thar can easily ferry around a group of four, although on longer journeys, the dearth of under thigh support at the back can be felt, especially for taller passengers. Also, the wheel wells at the back protrude inside the cabin so the rear passengers are required to fold their legs at a weird angle. Again, this isn’t an issue on shorter city rides, but will become bothersome on longer highway journeys.

Getting to the rear seats is another issue. Combined with the climb inside the cabin and the squeeze between the front passenger seat and the B-pillar of the Thar, your cousins might be adventurous enough to make that trip but your parents definitely won’t. In case of the latter, you’ll end up making that journey on the rear seats, with your parents occupying the front row.

Now trips to the mall spell one thing - impromptu shopping. A few shopping bags can be easily stuffed in the Thar’s boot but anything larger than clothes and the boot will fall short on space. You can make more space by folding the rear seats down. However, you still don’t get a flat floor. You can fit in bigger suitcases but you will have to mount them on top of the folded-down seats.

The test car we had was specced with a 2.2-litre diesel engine and a 6-speed manual gearbox. Like the older car, it continues to offer oodles of torque from as low as 800rpm and in most situations, you will find yourself upshifting around the 1500rpm mark, just like the old Thar.

Where this engine differs from the old Thar is in its refinement. The aluminium block means that the harsher vibrations and noise are kept in check. While you can’t feel the vibes at any given engine speed, you only begin to hear the engine once you start approaching 3000rpm. Yes, the levels of refinement, especially the sound, can be attributed to the Thar now being available with a hardtop from the factory, but that doesn’t take away anything from this new engine.

Overall, driving this engine feels like a much smoother experience. Even post 3000rpm, the engine continues to make power which was evident by its 0-100kmph time of 13.32 seconds. Now that is not seriously quick but let me leave you with this, it’s 0.01 seconds faster than the Tata Nexon.

The new 6-speed manual transmission has long throws, but they are light nonetheless. The feedback from the transmission feels mechanical. Compared to the older car, the gearbox now feels more precise. The clutch is well-balanced. Not too light that it feels unnatural but not too heavy that your left knee gives up on you in traffic. The bite point is also smooth and evenly spaced out in the clutch’s travel. The 4WD shifter is now a shift-on-fly lever and you can employ 4WD high while moving forward at slow speeds. The low-range gearbox can still only be activated after you have come to a full stop.

It’s a ladder frame SUV with core instincts that make it great at crossing the harshest of terrains. Expecting it to ride like how most cars do over regular tarmac was always going to be an unfulfilled fantasy. Small bumps on the road can be felt inside the cabin and going slowly over the big stuff, you can feel side-to-side movement inside the cabin. Going faster over the broken stuff eliminates these problems to a certain extent, but it still isn’t the greatest of experiences. Going around a corner, the Thar, as expected, comes with a decent serving of body roll. Not just that, this roll can be felt while changing lanes at highway speeds as well. The steering rack is slow as well, but you get used to it after a short time.

Where the Thar redeems itself is with its cabin insulation. Just like the engine, you can barely hear the tyre or wind noise inside the cabin. The comparison, in this case, is not with the older Thar but other compact SUVs and sedans in the market priced from Rs 13 lakh to Rs 14 lakh.

If there was one thing that the older Thar lacked in all its entirety, it was a basic features list. It was one of the most barebones packages ever and would have felt right at home in the 90s. In the new Thar, however, you get a touchscreen, power windows, keyless entry, a rear demister, cruise control, a tyre-pressure monitoring system, and LED tail lamps. Even the safety column is stacked with features such as hill descent control, ESP, ISOFIX child seat mounts, speed-sensing door locks, and three-point seat belts for all passengers. That is, apart from the mandatory dual airbags and rear parking sensors.

The Thar also comes with its own set of niggles. For instance, you’ll find the MID controls are positioned next to the steering, on the right of the driver. This makes it cumbersome to use them, and you also end up hitting the wrong button a few times. The glove box is so small that you’ll hardly be able to store anything in there and even the rear passengers don’t get any storage of their own. These are small things that you will have to adapt to if you want the Thar to be your daily driver.

Can You Live With the Thar?

Living with the Thar is definitely not going to be similar to living with a hatchback or a sedan or even a small SUV for that matter. There are going to be trade-offs. The ride for one, high-end features will be another and despite it being an SUV, the boot space with all seats up isn’t what one would call adequate. Then there is the smaller stuff that will make you adapt.

However, if the Thar-life is what your heart desires, it's certainly a car you can live with on an everyday basis. It’s just that you will have to be at peace with the sacrifices you end up making. In return, the Thar will reward you with the awe of onlookers and its ability to flatten most obstacles in its path.