A new milestone in the company's history, the Huracan could go on to become the highest sold Lamborghini ever - overtaking the Gallardo's number very soon 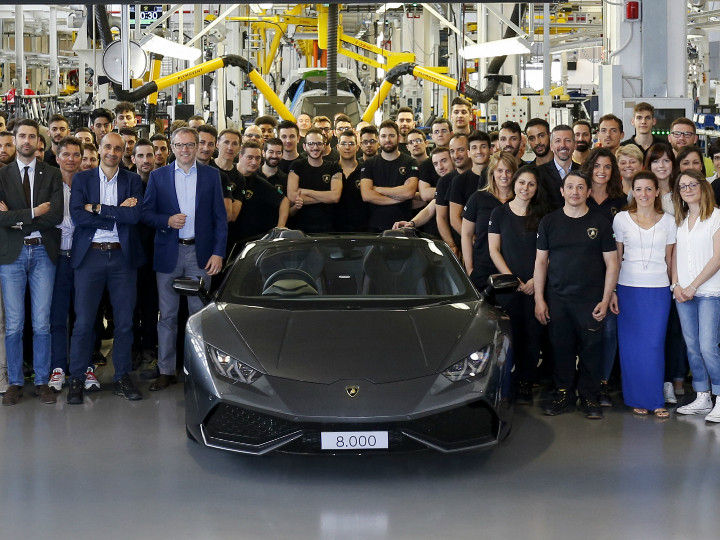 With the rollout of a Huracan Spyder painted Grigio Lynx, Lamborghini has achieved another milestone in its 54-year-old history. This particular Huracan has the chassis number 8,000 and comes over three years after the first unit rolled out of the company's plant in Sant'Agata Bolognese.

Lamborghini has rolled out more Huracans out of its factory (8,000) than Mitsubishi has sold cars in India (5,659) in the same period!

The Huracan is on its way to overtaking the manufacturing numbers achieved by Lamborghini's previous entry-level offering, the Gallardo. In the ten years that the Gallardo was in production, Lamborghini manufactured 14,022 copies of it. The Huracan, on the other hand, has crossed the 8,000 mark in just over three years!

The Lamborghini Huracan along with the upcoming Lamborghini Urus SUV is expected to help achieve sales figures never seen before by the sportscar manufacturer. Since the launch of the Huracan, Lamborghini has seen a steady rise in the number of cars it has sold worldwide; In 2014 it sold 2,530 cars, in 2015 it sold 3,245 cars and in 2016 it sold 3,457 cars.

The Lamborghini Huracan is available in five variants, all powered by the same 5.2-litre, naturally-aspirated V10 motor paired to a 7-speed dual-clutch transmission.

The most hardcore road-legal version of the Huracan is the LP 640-4 Performante, the V10 motor in this version develops 640PS/600Nm and achieves a 0-100kmph time of 2.9 seconds. All of these variants, including the limited edition Huracan Avio, is on sale in India.