When two cars are happy and angry in equal measure, it can only be on a racetrack. Here’s what a Lamborghini Huracan and Aventador feel like at the Buddh International Circuit 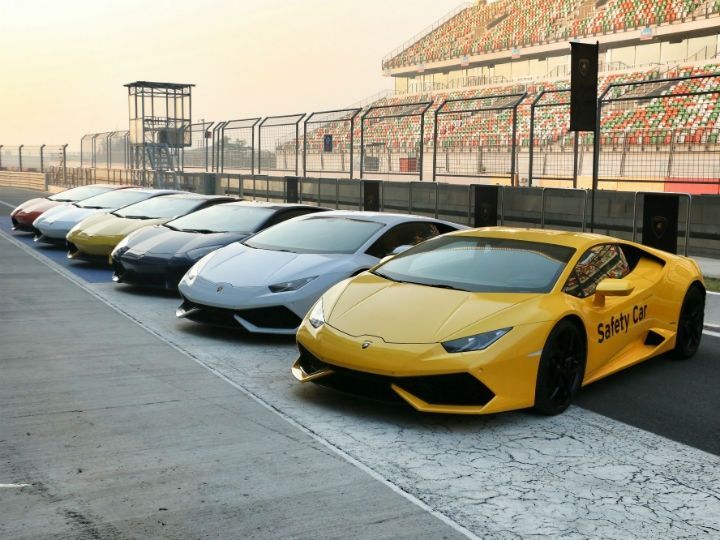 Forty One Point One Two kilometres, or thereabouts. That’s eight laps down the BIC, four each in the Huracan and Aventador. It’s very little distance or driving time in these raging bulls to get under the skin of what is one of the most dramatic driving experiences of my life, but enough to get a feel of the alluring world of supercars. Lamborghini had organized a drive at the BIC two years ago so such opportunities don’t come often. You can imagine the eagerness to get into the driver’s seat.

For all these years of not getting the chance to drive a Lamborghini, all things could be only seen and read, and heard! Oh my, the aural experience the Huracan and Aventador provide. That orgasmic V12 in the Aventador as I thumb the airline style flip-switch or the off-throttle playful burble from the Huracan are memories I can recollect with my eyes closed. My first go is in the baby Lambo and straight up, the feeling is a bit intimidating. Getting in the driver’s seat of a car that’s half as tall as you requires an athlete’s body, one I don’t have. You see the car demands a certain level of fitness to do justice to its potential. You may be a fantastic driver, but you will tire out soon enough driving these Italians around a track if you aren’t fit enough. After much effort though, tucked in and ready to go, the Huracan feels perfect. It’s the right size of supercar, not outlandishly big as the Aventador, not as hard edged even, and nowhere as close to being temperamental as Lamborghinis have known to be in the past.

The Volkswagen influence shows. The Huracan is easy to drive, easier to place for right corner entries and exits and easiest to stop. Turn 3 at the BIC is an uphill right hand hairpin after a fast sweeping turn two, if you are unfamiliar with the circuit. Shedding speed after exiting the first corner into this hairpin requires a heavy stab at the brakes. Standard fit carbon ceramics are progressive and bite with cavernous force. That the Huracan weighs just 1422kg helps a fair bit. Exiting turn three on the back straight with a heavy stomp on the accelerator gets all 610 horses (or ridiculously athletic bulls) to gallop with a roar right behind your right ear. Of the three modes on offer, it is imperative to pick Corsa on the ANIMA toggle on the steering wheel by now. It’s track-friendly and bloody quick response times get the Huracan LP610-4 to 100kmph in 3.2 seconds. A few upshifts later midway through the back straights, I am staring at the digital speedo climbing quickly north of 200kmph and when it’s time to frantically jump at the brakes at the end of the straight, we are already doing 265kmph. Savage and easy.

So now in second gear, exiting turn four as I throttle out, I am thinking how it took me just about three kilometers of driving time in a supposedly mental Lamborghini to have the confidence to clock such silly speeds. The Huracan on track gives the impression of an easy to use Supercar for the road, something Lamborghini has never done in the past. A couple of laps into the drive, I am already confident to not mug it up at a faster pace. We are driving in a convoy of three and the pace car is convinced enough to open the taps as we exit corners. Wow the sense of speed in the Huracan is fantastic. It sits low and slices through air more efficiently than any other car I have drive around the BIC, corners flat and the sticky Pirellis are so lovely, I intend to steal a few at the end of day. Four laps in the Huracan and it’s time to get behind the wheel of its big brother.

Right away, the steering is heavier, the rear haunches crowd my view in the wing mirrors and polished carbon fibre looks so tasty, I’d lick it if there was time. But there is no time as the track is open to drive out of the pit lane. Again the three modes – Strada, Sport and Corsa are available. Stick it into Corsa and bang out of turn one, tug the right paddle into third and the sledgehammer strikes, kicking the naturally aspirated V12 in the butt for more gut-wrenching. The Aventador has a robotized manual gearbox, known infamously among rather pedestrian cars using these in India as AMTs. AMTs work here though and with brilliant effect. The unit is brutal and quicker through gears than I can think. It’s a greater physical experience than the Huracan and it’s ought to be. 0-100kmph comes in just 2.9 seconds and top speed is a crazy 350kmph.

With the throttle pedal mashed in and doing speeds north of 250kmph after which I wouldn’t dare looking at the speedo, I jump on the brakes and feel the sweat down my spine and the back of my neck. The big bad bull is a lot more intimidating that the rather playful Huracan. After negotiating turn four, the right hander takes you through a series of corners where the wide body of the Aventador is feeling bigger than I had actually thought. The car in front of me is doing a ballet around the next set of corners with the active rear wing working through its angles. It’s a sight watching the Aventador hustle its way around a track, let alone driving one.

The jerk in every shift gets smooth off-throttle and the weight in the steering feels right and natural after a while. The Aventador is meant for the track, for banging out fast laps and leaving a thunderous lingering exhaust note on that pit straight. It’s also not the car for me. The Huracan is, and I get now why Lamborghini has buffed the jagged edges. More people want usable supercars than those who crave bragging rights. The savagery of the Aventador is an experience every petrolhead must witness in the flesh. You will want to drive it once in a while but not every day. The  Huracan you can drive everyday with a little extra care, and live your Lamborghini life to the fullest.