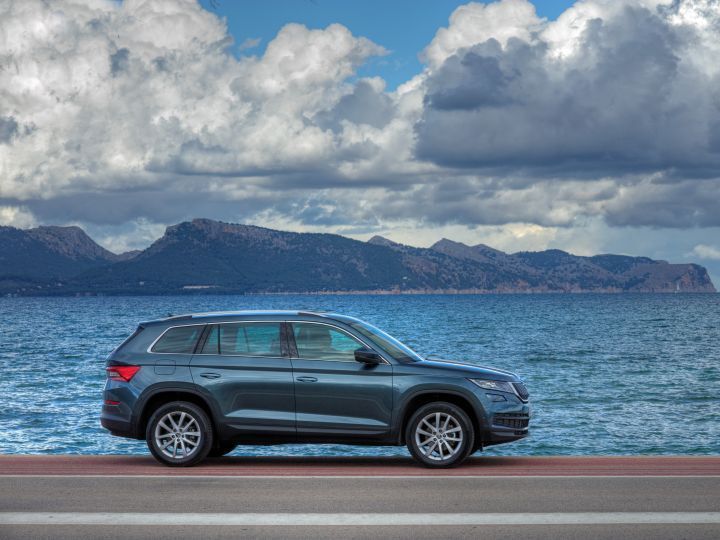 After what seems like a long wait for the Skoda Kodiaq, the Czech carmaker has finally announced the launch date for its first proper 7-seat SUV. Scheduled to be launched on October 4, 2017, the Skoda Kodiaq will go up against traditional SUVs like the Ford Endeavour and the Toyota Fortuner and also against its distant cousin - the Tiguan. We will be driving the India-spec SUV soon and will have a review up this week to help you decide if it's the SUV you’ve been waiting for.

Under the chiselled bonnet of the Kodiaq lurks a 2.0-litre diesel engine that also powers the VW Tiguan. On the Kodiaq, this engine makes 150PS of maximum power and 340Nm of peak torque. The diesel motor will be mated to the now familiar 7-speed DSG automatic transmission with paddle shifters and various drive modes. The India-spec Kodiaq is expected to feature a Haldex all-wheel drive system which can vary the power being sent to the rear wheels under different driving conditions.

If diesel is not your preferred choice of fuel, then Skoda will also sell you the Kodiaq with a 2.0-litre turbocharged petrol engine from the Octavia RS, albeit with a little less power - 180PS to be exact. This engine, however, will not be available at the time of launch and will be introduced later in the year or early 2018.

The Skoda Kodiaq’s large proportions and subtle lines make it a very handsome SUV. However, it does have the tendency to pass off as an overgrown estate from some angles. The Kodiaq measures 4697mm in length, 1882 mm in width, 1676 mm in height, and with a wheelbase of 2,791mm, it is going to be plenty spacious as well. Its rated ground clearance is 140mm, but that's under fully laden conditions. There is plenty of space inside with the boot offering 270-litres with the three rows up in place. Folding the second and third row can generate a massive 2005-litres of space.

Inside the cabin, you can expect excellent fit and finish levels that Skoda is known for. The Kodiaq will get an 8-inch capacitive touchscreen infotainment system which supports Android Auto and Apple CarPlay. Other features inlcude a three-zone climate control, electrically-adjustable driver seat with memory function, powered tailgate, reversing camera with top view, and a massive panoramic sunroof. Along with these, you also have Skoda’s 'Simply Clever' touches like retracting rubber protectors on the doors, umbrellas stowed away in the front doors and a removable torch in the boot.

The Kodiaq is expected to be launched with a starting price around Rs 25 lakh with the top-end all-wheel drive variant costing you Rs 32 lakh. We have already driven the international version of the SUV and you can have a look at it here: Skoda Kodiaq First Drive Review