From Ingolstadt To India: Audi’s Green Hulk Is Coming!

The Audi RS Q8 is the fastest SUV around the Nurburgring 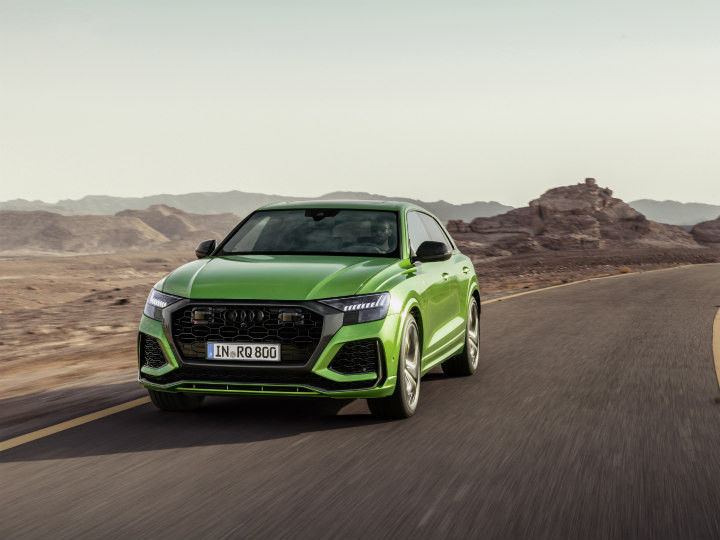 Audi India has been bringing some exciting models to the country of late. We saw the launch of the Audi A8L followed by the introduction of the manic RS7 Sportback. Now, the carmaker has announced its next launch for the country. Any guesses?

It’s the RS Q8, the top of the line RS model! It’s the fastest production SUV around the Nurburgring (in Germany), covering the Green Hell in 7 minutes and 42.2 seconds. No doubt this is helped by the massive 600PS 4.0-litre twin-turbo V8 petrol engine that comes coupled with a mild-hybrid system for torque boost. Power is sent to all four wheels via an 8-speed automatic gearbox. All of this technical wizardry helps the RS Q8 go nought to 100kmph in 3.8 seconds and pushing on further results in a top speed of 250kmph.

The RS Q8 also gets a couple of RS-specific upgrades to its underpinnings. For starters, the RS-specific adaptive air suspension ensures the damping is kept in check. You can also adjust it based on the road surface. So you can keep it in the stiffest setting on the track or dial it to comfort for a relaxing cruise. Rear-wheel steering ensures that it’s agile while an active anti-roll bar ensures that body roll is minimal.

And while the standard Q8 does look the part, the RS Q8 takes things a notch up. It gets a single-frame blacked-out grille and tastefully done 22-inch dual-tone alloy wheels that look meticulously finished. Even the front bumper features larger air dams that are sporty while the rear one comes with dual exhausts. Sweet!

The interiors have also received RS-specific upgrades and revamped sports seats. The three screens are also RS-specific and come with a separate user interface. A special mention must be made about the virtual cockpit, which features a lap time, G-force meter, shift lights and a whole lot more!

The RS Q8 is expected to reach our shores in the next few weeks with a pricing of around Rs 2 crore (ex-showroom). It ain’t cheap but considering that it’s quite similar to the Lamborghini Urus underneath, the RS Q8 seems like a steal. Sure, that snob value of a Lamborghini might be missed, but you get similar performance and capabilities for a whole lot less. Its other rival is the Porsche Cayenne Turbo.