Audi Makes Its Next Move, Launches The A8L At Rs 1.56 Crore!

The luxury sedan is powered by a 3.0-litre TFSI petrol engine capable of 340PS/500Nm. 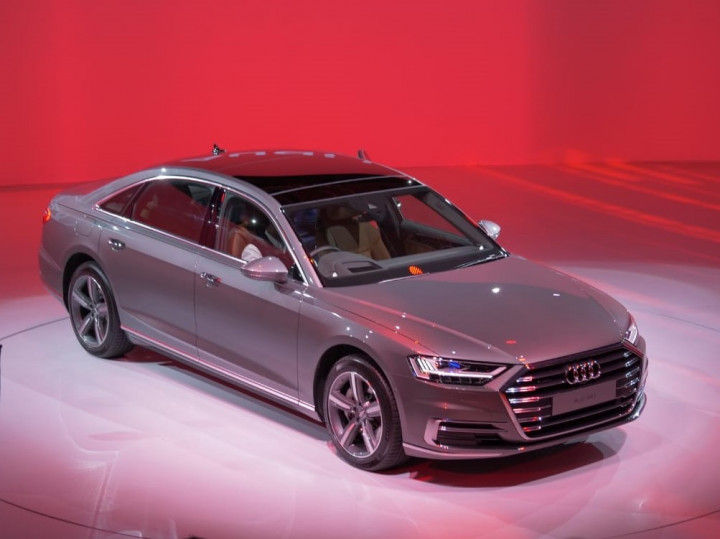 Audi India is on a roll. Right after the launch of its flagship Q8 SUV, the Ingolstadt manufacturer has now launched its flagship luxury sedan, the A8L at Rs 1.56 crore. In a nutshell, what it brings to the table is revised styling, a loaded cabin, and a new 3.0-litre TFSI petrol engine.

As seen on the new A6, the A8 also features a sharp design theme with slim LED headlamps and a huge front grille (which is a norm nowadays). The sedan now features a front face in line with the crop of modern cars from Ingolstadt. Highlights at the rear include a single piece tail lamp that runs through the entire rear section. Overall, the A8 has gained a considerable amount of street cred with its sharp design language.

Meanwhile, the cabin features a drastic change with almost all of the elements being novel. The 4-spoke steering wheel, all-digital cluster, and generous use of silver are some of the highlights. This being the A8, the rear seat experience is what matters the most. The A8L gets a luxurious twin-seat setup with enough features to keep you entertained. Standout kit are massaging seats, individual climate controls, 10-inch Android tablets, sun blinds, ambient lighting, 19-inch alloy wheels and a refrigerator.

The rear left occupant also gets the relaxation seat. What it does is enable you to slide the front seat all the way forward, expand the footrest (which has massage function), and recline the seat.

As we hinted, the 2020 A8L packs some interesting features to justify its nine-figure price tag.A Bang and Olufsen sound system, connected car technology, four-zone climate control aircon, in-car air quality system, ambient lighting, powered front seats, and Matrix LED interior lighting are some of the highlights. Safety features on offer are 8 airbags, ABS with EBD, front and rear parking sensors, a 360-degree camera, as well as lane departure warning. It also gets some tasty additions such as all-wheel-steering and air suspension as standard!

Helping the A8 carry all of this equipment and its occupants is a 3.0-litre TFSI petrol engine that develops 340PS of power and 500Nm of torque. These figures are sent to all four wheels through an 8-speed automatic gearbox. Audi has equipped the A8 with a 48V mild-hybrid system, which provides an extra torque boost aiding acceleration. The mild-hybrid system also enables the luxo-barge to cruise in fully electric power for 40 seconds between speeds of 55kmph and 160kmph.

The A8L faces competition from its arch-rivals the Mercedes-Benz S-Class and the BMW 7 Series. In other news, have you checked out the Q8 SUV?