The "real" Harleys aren't fading into the sunset just yet. They're meaner and here to rage down Indian streets. 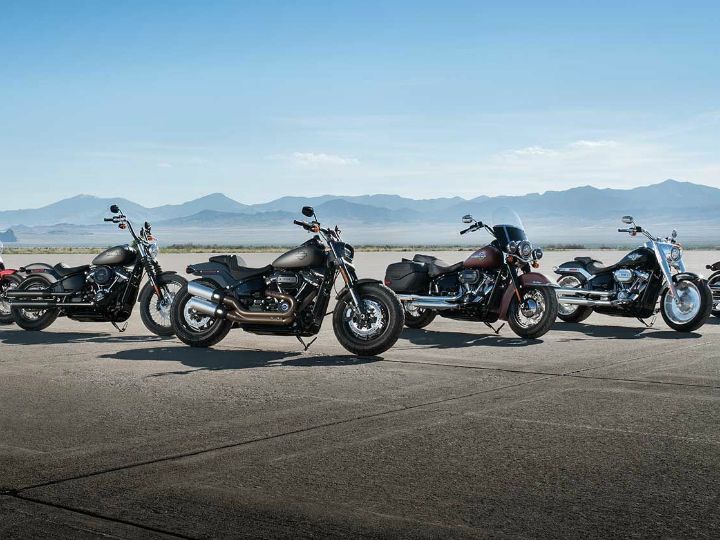 All the four motorcycles now fall under the 2018 Softail range as Harley has dissolved the Dyna family of bikes. The main reason behind this move was to offer common chassis and engine configurations but in different iterations, similar to the Triumph Bonneville range. The new Softail bikes are offered with two engine options internationally - Milwaukee-Eight 114 (1870cc) and Milwaukee-Eight 107(1750cc). However, it is only the latter that has made it to India.

The new Harley-Davidson Fat Bob is the most visually appealing motorcycle among the four. The square LED headlight, massive USD forks, chunky tyres and the massive twin exhaust muffler endow the new Fat Bob with a wicked vibe that is fresh and enticing. The 2018 Fat Bob is powered by the new 8-valve Milwaukee-Eight engine that offers more power and refinement compared to the older powerplant. The American bikemaker claims that the 1745cc, V-twin, oil-cooled engine produces 145Nm of peak torque at 3000rpm, which is a massive 24Nm more than the older bike. The new V-twin motor comes with dual counterbalancers in order to negate primary vibrations.

Harley also claims that the new bike is faster to 100kmph by 10 per cent in comparison to its predecessor. The steel tubular frame has been redesigned as well and is now 65 per cent stiffer than the previous one. The new frame uses 50 per cent fewer components, which has resulted reducing the weight by 12kg, making it tip the scale at 309kg. The bike also gets Showa Dual Bending Valve (SDBV) forks up front and the rear monoshock unit is adjustable for preload via a knob; something no one saw coming on a Harley a few years back. The Harley-Davidson Fat Bob will compete against the Triumph Thunderbird Storm.

The new Heritage Softail Classic has characteristic cruiser styling with tonnes of chrome and bling. For the new 2018 model, Harley designers have maintained the old-school elements like the chunky mudguard, tall windscreen and saddlebags, but given it a modern LED headlamp and a dual-tone paint job. Unlike soft saddlebags as seen on the older bike, the new motorcycle gets lockable and sealed ones. Cruise control also makes its debut on the new bike and the windshield is detachable. The powerplant is the same 1745cc V-twin, oil-cooled engine as seen on the Fat Bob, that delivers 144Nm of torque. The frame is also similar to the Fat Bob making the new bike 14.5kg lighter than the older machine. Harley engineers have also ditched the twin shock absorbers in favour of a monoshock. According to Harley, the shock action is conventional, which means that when the rear wheel hits a bump, the shock gets compressed, instead of extending as seen on the older bike, for better ride quality.

True to Bobber tradition, the bike has a stripped-down look and is a great option for bikers who like to customise their motorcycles. The bike gets ape-style handlebars, a chopped fender and a petite fuel tank along with blacked-out staggered dual exhausts. The 107 Milwaukee-Eight motor delivers 144Nm of torque while the bike weighs 286kg. Similar to the Heritage Softail, the Street Bob has also omitted twin shock absorbers at the rear in favour of a monoshock unit.

The Harley-Davidson Fat Boy from the American company’s Softail lineup has been a hit among bikers worldwide ever since it was first seen in the movie Terminator, back in the 90’s. Since then, the bike has received tweaks and modifications from time to time. For 2018, the halogen headlight has now been replaced by an LED unit on the new Fat Boy. It carries forward the 18-inch disc wheels that now flaunt a new ribbed look and come shod in wider 160mm front and 240mm rear tyres. The basic styling is similar to the Fat Boy but with a modern twist.

This is the all-new Harley-Davidson Breakout