The ‘biggest’ Bajaj Pulsar takes on the flagship TVS streetfighter. Which one wins? 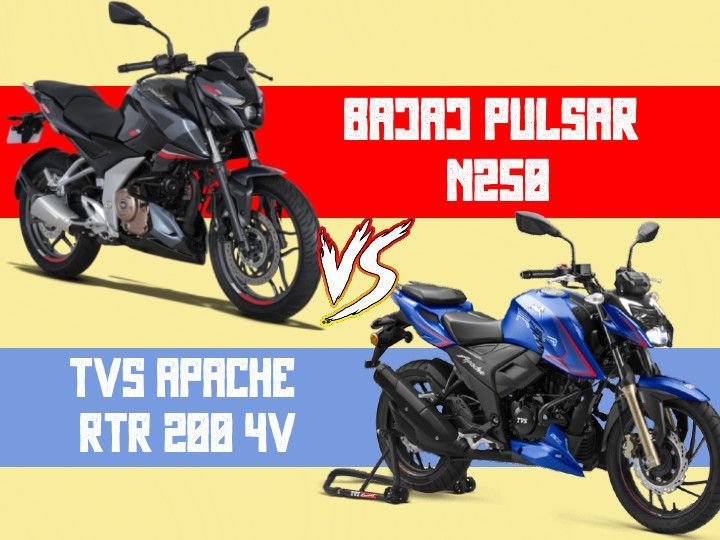 Bajaj recently took the wraps off the Pulsar N250, priced right in the ballpark of the ever-so-impressive TVS Apache RTR 200 4V.

So we’ve pit these two indigenous streetfighters against each other, albeit on paper, to find out which one deserves your hard-earned money:

The TVS Apache RTR 200 4V’s design has been around for a few years now, though it doesn’t really look dated.

Bajaj, however, has given the Pulsar N250 an all-new design which looks quite futuristic.

Up front, both bikes pack LED headlights. The Pulsar, though, takes a unique approach while the RTR 200 4V feels more conventional.

From the side, we like the TVS Apache RTR 200 4V more, courtesy its sleek headlight mask, more muscular tank design (even though the N250’s fuel tank is two litres larger), and sportier split seats.

Coming to the tail end, the Pulsar N250 strikes again. Thanks to its sleeker “reverse boomerang” LED lights, it appears sharper than the RTR 200 4V’s tail.

Overall, it’s all down to personal preference here. We, for instance, would prefer the Apache RTR 200 4V in its ravishing blue shade, which mimics the track-spec bike and helps its road-going iteration look more premium than the Pulsar N250 as well.

We’ve said it before and we’ll say it again, there’s no matching the TVS Apache RTR 200 4V in terms of features. From Bluetooth connectivity to riding modes to adjustable suspension all around, it comes laden with goodies to enhance your riding experience.

The Bajaj Pulsar N250 may not be a match for the Apache RTR 200 4V, but it is still the most feature-packed Pulsar out there. So you get all-LED illumination, a slip-and-assist clutch, a USB charging port, a new instrument cluster with range and gear-position indicators, and ABS.

Outright performance is the Bajaj Pulsar N250’s forte. It is powered by a 249cc single-cylinder engine putting out 24.5PS and 21.5Nm.

While the Apache suffers from a significant power deficit, its engine features four valves, ride modes, and TVS’ Glide Through Technology, which would make it more efficient and free revving than the Pulsar N250. At 152kg, it is also a crucial 10kg lighter than the Pulsar N250, thus bumping up its power-to-weight ratio.

Both bikes roll on 17-inch alloys and are sprung on a telescopic fork and monoshock. But as mentioned above, the Apache RTR 200 4V’s Showa-sourced fork offers adjustability, which is missing on the Pulsar N250.

Additionally, the RTR 200 4V gets a clip-on handlebar, while the Pulsar N250 gets a conventional unit, which should make the RTR 200 4V better in the twisties.

The Pulsar N250, though, gets 300mm front and 250mm rear disc brakes which are 30mm and 10mm bigger than the Apache RTR’s front and rear brakes, respectively.

Bajaj has priced the Pulsar N250 at Rs 1,38,000 (ex-showroom, Delhi), which is just Rs 115 less than the TVS Apache RTR 200 4V’s dual-channel ABS variant. Considering the RTR 200 4V provides better features, more premium looks, and top-notch components for just Rs 115 over the Pulsar, it is really a no-brainer pick here.

However, if outright performance outweighs features for you, then the Pulsar N250 is the one for you. Stay tuned to ZigWheels, though, as we’ll be comparing the performance numbers of these two bikes very soon. 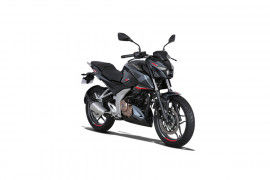 All Comparisons of Pulsar N250