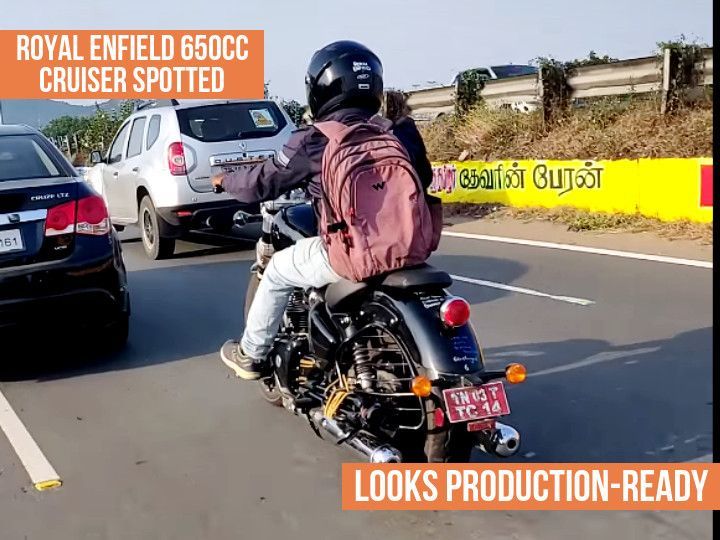 By now, everyone knows that Royal Enfield is on course to launch a couple of new 650cc motorcycles. While these have been spotted testing time and again, the latest sighting suggests that the Royal Enfield 650cc cruiser may be almost set for production, hinting at an imminent launch.

We say this because the latest test mule bears no camouflage. Everything -- the twin pea-shooter exhausts, round indicators, USD fork, backrest, glossy black bodywork, broad split seats, and tall, transparent windscreen -- is clearly visible. And if anyone has doubts about its identity, the leg guards and engine casing read ‘Royal Enfield’.

However, we believe the leg guard, windscreen, backrest, and fog lamps will all be sold as separate accessories and not standard, considering the bike was previously spotted without any of these goodies.

These aside, a closer glance at the photos offers a sneak peek at the 650cc cruiser’s instrument console. It seems like a semi-digital unit similar to the 2021 Classic 350, but it’ll probably also pack a second pod housing the Tripper Navigation unit.

The upcoming Royal Enfield cruiser will be powered by the same 649cc twin-cylinder thumper as the Interceptor 650, without any changes to the output or the engine tune.

The only thing yet to break is the bike’s name. Recently, there was some talk hinting that it would be called the Super Meteor 650, and we like how it sounds. Here’s why this name makes sense.

We think Royal Enfield will launch the Super Meteor 650 either by the end of this year or early 2022. Expect it to be priced at around Rs 3.5 lakh (ex-showroom), which will make it the most expensive bike in the company’s portfolio.