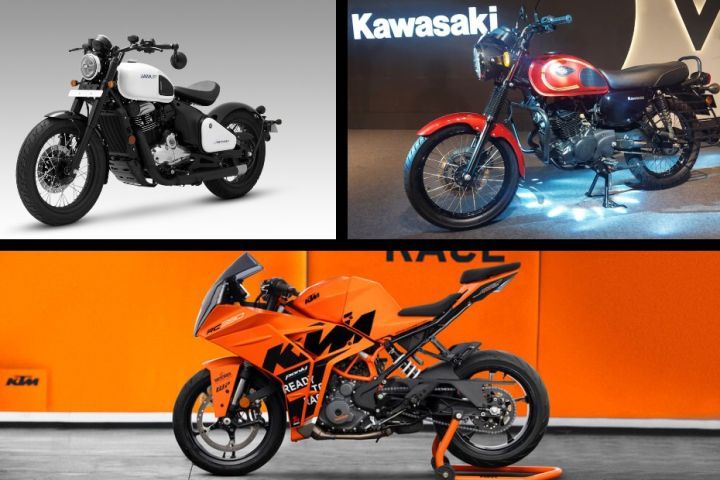 The two-wheeler space is going to witness a lot of fireworks in the coming few weeks as all manufacturers are gearing up for big launches and insane offers. So, here’s what made the biggest noise this week:

Launches Of The Week

It might wear the tag of the most affordable Kawasaki on sale in India but the W175 is no steal. Check out why we think so in our launch story.

Yamaha took a couple of weeks to announce the prices of the special version of the sporty Aerox 155. Given the fact that MotoGP is heading to India next year, this is something we might see quite a bit at the BIC paddock.

Speaking of the Bharat GP, KTM too gave a sporty race-inspired livery to its RC 390 and RC 200. While the bikes look a whole lot better than the standard versions, the GP editions don’t have the Red Bull livery. Go check them out in this story.

Weaving stealth and bling together is tough to pull off. Did Hero manage it with the Xtreme 160R Stealth Edition 2.0? You be the judge by going through what the new trim has to offer.

Barely a day after it was spotted in camouflage, Jawa launched another bobber, the 42 Bobber, this one based on the 42 roadster. What makes it different from the Perak? This story has the answers.

Spied Bikes Of The Week

The hype surrounding this bike is incredible and this might just be the clearest set of imagery that we have managed to source of the upcoming Himalayan 450 LC.

There seems to be a lot that’s happening coming out of Chakan in 2023 as the week saw the first sightings of the Bajaj-Triumph bike on Indian soil. It was the scrambler and not the roadster, but rest assured the two bikes will come together soon.

Hero is cashing in big on making its electric presence solid by making two key announcements this week. Firstly, the teasers of its Vida e-scooter are going in full swing, one of which confirmed Gogoro’s removable batteries and battery swapping tech being an integral component of the upcoming e-scooter. Expect a full down-low of the e-scooter next week.

More importantly, Hero is just not looking at mass electrification but also making a mark with enthusiasts. It has announced a partnership with Zero Motorcycles, a global player renowned for making performance electric motorcycles. Will this finally be the start of the Karizma revival we have been longing for?