The recently unveiled 390 Adventure has got us thinking 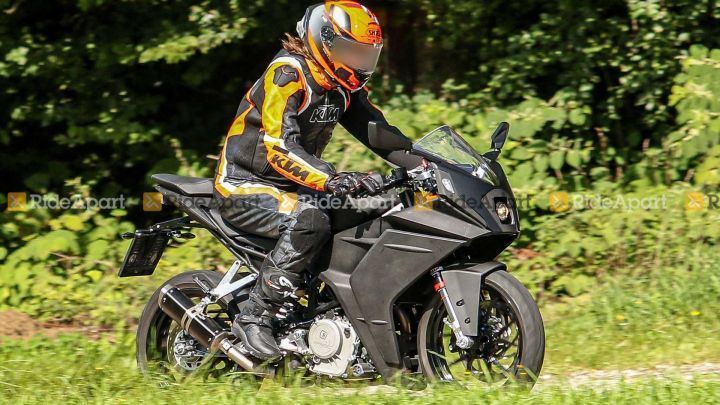 The RC 390 has remained largely unchanged since its introduction in 2014, but that’s about to change soon. We know that KTM is developing the next-gen RC 390 for 2020, and the recent unveiling of the 390 Adventure has got us thinking about what the new RC might be like.

The RC’s 373.2cc engine has always been a very potent package, but it started off its life a bit rough around the edges in 2014. The 2017 update brought with it some maturity in terms of engine character and refinement, as well as a bit more torque. In its current form, the engine doesn’t suffer from any major flaws, so we expect evolution rather than revolution from KTM.

From these spy shots, we can see that the engine covers remain largely unchanged, but the big difference lies in the exhaust system. Emission norms will be a major talking point next year and the 2020 RC 390 will feature a Euro 5/BS6-compliant motor thanks partly to a redesigned cat con unit. We hope that the engine output will remain identical to the current motor, but there is a possibility that the RC could lose a few ponies in the quest for lower emissions.

While we don’t expect the engine to be massively overhauled, the electronics controlling it could get a drastic update. Going by what we’ve seen on the KTM 390 Adventure, it isn’t beyond the realm of possibility for KTM to equip the new RC 390 with an IMU. This would mean cornering ABS and lean-sensitive traction control (MTC, in KTM lingo), aids which are just as useful on a track-focused supersport as they are on an adventure tourer, if not more.

Another fancy bit of kit being offered on the 390 Adventure is an optional bi-directional quickshifter. Once again, this is the sort of thing usually seen on supersport motorcycles, albeit in a much higher displacement range. But having been the first mover in the small capacity adventure tourer segment, KTM could also set a precedent and offer an optional quickshifter on the next-gen RC 390.

While the 390 Duke got a fancy colour TFT display in 2017, the current RC continues to trudge forward with its original LCD unit. Fortunately, the addition of these rider aids would necessitate the inclusion of a TFT display as well, which means the RC will finally be up to date with features like Bluetooth connectivity too.

We could scarcely believe our eyes when we saw adjustable suspension at both ends of the 390 Adventure since this level of equipment isn’t commonly seen in this displacement range. However, technology trickles down over time and perhaps KTM could offer adjustable suspension on the new RC 390 as well. The current bike only gets preload adjustability for the rear monoshock but the 2020 version could come with adjustable damping rates in at least one direction at both ends. At the very least, we will see the separate function USD fork from the current 390 Duke bolted onto the new RC.

The frame itself will continue to be a steel trellis unit but we could see a bolt-on sub-frame like on the 390 Duke. Ergonomics also seem to be a little more relaxed on the test mule, and the sub-frame isn’t as steeply inclined as it currently is. Pillion comfort should also be greatly improved on the 2020 RC thanks to a roomier rear seat.

Looks were one of the main talking points when the RC 390 was first unveiled since the bike had a rather polarising appearance. Over time, though, the bug-eyed design has grown on us. Things are all set to change, with the 2020 RC 390 set to get a heavily revised fairing and headlight design. The twin projector lamps will make way for a single central headlight unit reminiscent of the erstwhile RC8.

The front screen has also been redesigned and the fairing’s side panels are new too. A neat design feature on the present RC is the way the indicators are integrated into the mirror stalks. Unfortunately, on the new bike these seem to have been moved to the front fairing area and integrated into the headlight unit.

Historically, the RC has been a slightly more expensive motorcycle than the equivalent Duke. This hasn’t been the case for the last couple of years, though. With the 390 Duke getting a higher level of equipment than the RC 390, both motorcycles are currently priced almost neck-and-neck. With the RC all set to receive these comprehensive updates next year, we expect KTM to justifiably bump up the price of the model as well. If our estimation of the extra equipment being thrown in is accurate, a hike of around Rs 20,000 to Rs 30,000 would be reasonable in our opinion. With BS6 emission norms set to kick on from April 1 next year, we expect KTM to launch the BS6-compliant RC 390 in the first half of 2020.