The Triumph-Bajaj Scrambler Spotted In India For The First Time 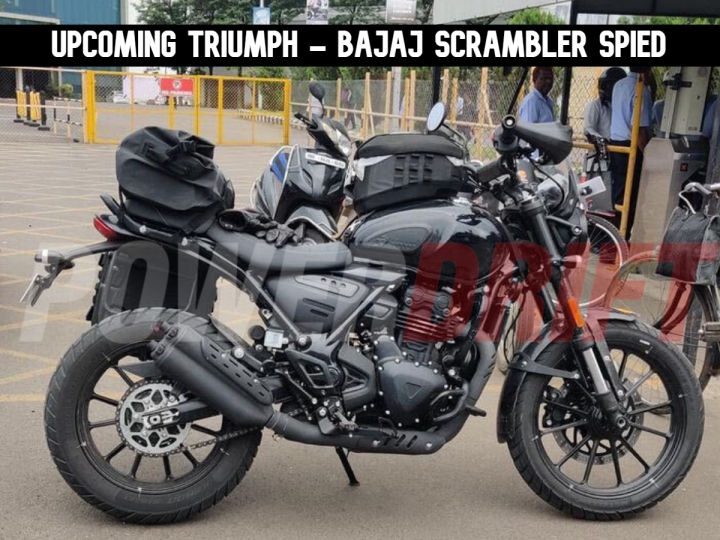 The Triumph Bajaj Scrambler has been spotted on test for the first time in India, in near production-ready guise… and at first sight, this upcoming bike looks absolutely gorgeous.

Along with the Scrambler, a roadster also looks to be in the offering, as it has been spotted on test multiple times earlier this year. While both the bikes look to be powered by the same liquid-cooled engine, the main difference lies in the underpinnings.

The Scrambler gets a larger 19-inch front wheel, when compared to the 17-inch alloys on the Triumph Bajaj Roadster. However, the rear wheels of both bikes are 17-inch units. Based on the latest spy shots, the alloys on the Scrambler are wrapped in block pattern Metzeler Karoo Street tyres, which should help this bike tackle trails with ease. It gets a USD fork and gas-charged monoshock, while braking duties are taken care of by Bybre brakes at both ends, with a front radial caliper.

The test mule was also equipped with accessories like a visor, handlebar brace, crash guard, engine guard and knuckle guards. Ergonomics look friendly too, courtesy the easy-to-reach handlebars, serrated footpegs and split-seat setup. And though the console on this bike was covered, we expect it to get a smartphone-compatible TFT unit, as seen on the spy shot of the roadster abroad. The test mule spied in India also did not have a beak – like the one spotted abroad – though the rest of the bits are identical on both bikes.

Triumph-Bajaj’s scrambler will be powered by the same single-cylinder liquid-cooled engine, displacing around 350cc-400cc, as the roadster. It also features an upswept double-barrel exhaust for a sporty look.

The Triumph Bajaj Scrambler could cost Rs 25,000 more than the roadster, putting its expected price tag at around Rs 2.50 lakh (ex-showroom). We expect it to be launched along with the roadster in the first half of 2023. Currently, the only affordable scrambler-style bikes in India are the Husqvarna Svartpilen 250, Royal Enfield Scram 411 and the Yezdi Scrambler.