The bike flaunts a new suspension, updated ergonomics, and more 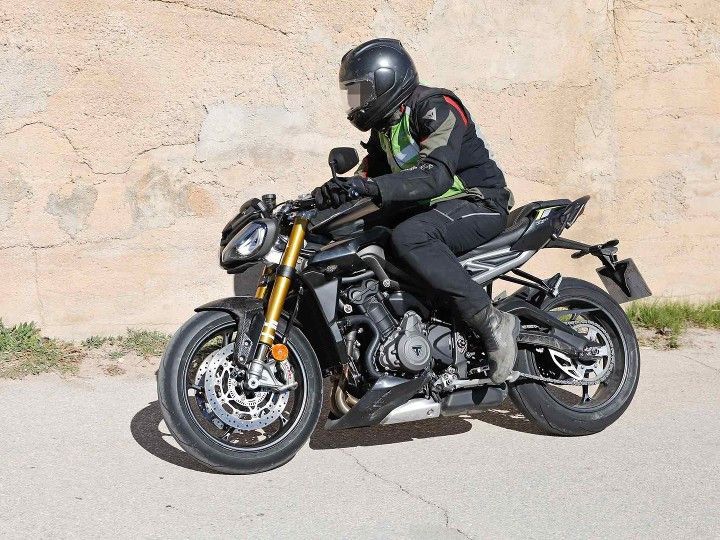 The updated Triumph Street Triple RS has been spied testing in Spain. This could be the 2023 iteration of the naked streetfighter, and it has got a bunch of updates to the suspension, ergonomics, and overall design.

First things first, as we can clearly see from the pictures, the next-gen Street Triple RS flaunts the Öhlins USD fork up front, borrowed from its elder sibling, the Triumph Speed Triple 1200 RS. This replaces the existing Showa 41mm BPF fork, suggesting improved suspension and ride quality. The Brembo Stylema calipers (replacing the Brembo m50 units), too, are shared with the bike mentioned above.

Another major update would be the clip-on handlebars (in place of the single-piece unit) attached to a lowered triple clamp, allowing for a more committed riding position, similar to a sportbike. At the front, the test mule features a new splitter that could result in better airflow, a shorter redesigned nose cowl, along with a shorter belly pan that extends up towards the engine.

At the rear, Triumph seems to have installed a larger sprocket, which could result in a slight change in performance and quicker acceleration. The tailpiece, too, gets subtle cosmetic updates.

Apart from the above-mentioned updates, the bike remains unchanged; it gets the same liquid-cooled, inline-three 765cc engine making 123PS and 76Nm. These updates to the ergonomics and suspension should result in even better handling and improved ride quality of the streetfighter.