With KTM confirming the E-Duke’s development, here’s our take on what the upcoming electric motorcycle should bring to the table 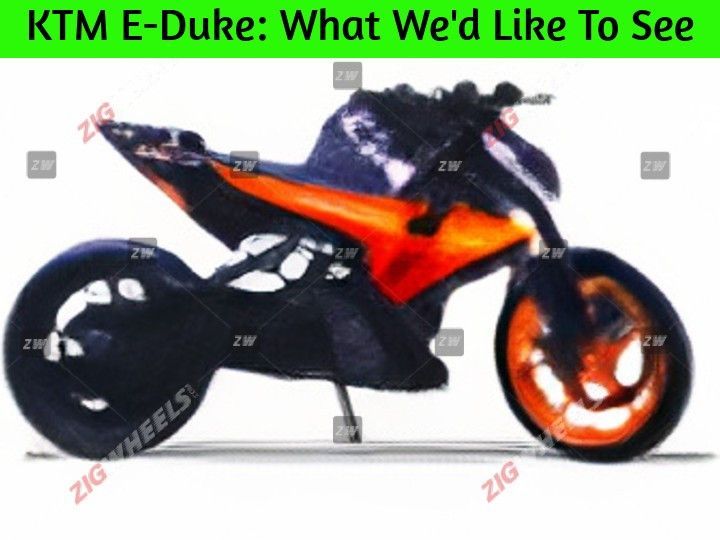 PIERER Mobility AG, KTM’s parent company, recently released its investor presentation. The document confirms the development of an electric motorcycle under KTM’s Duke lineup, called the KTM E-Duke. Only the power output and the battery capacity have been revealed so far. However, using these parameters, we try and deduce what should the ideal E-Duke be:

A beginner-friendly hooligan for the city:

The investor presentation rates the KTM E-Duke’s nominal power output at 10kW. In Europe, 125cc petrol two-wheelers and electric two-wheelers with a maximum output of 11kW come under the A1 licence category. The KTM E-Duke fits this perfectly.

Why so little range, you ask? Well, as mentioned before, this will be a beginner-friendly bike meant for the city. The biggest stumbling block of adopting electric propulsion is that with the current level of technology, the battery size will become prohibitively large to pack in as much range as we’d like from an enthusiast-level performance motorcycle. Sure, electric cars can accommodate larger battery packs to ensure more range, but that’s only possible because the space on offer is more generous. Sure, you can still cram in a large capacity battery on a motorcycle, but that comes at a substantial financial cost of engineering and weight.

With the KTM E-Duke, it looks like the Austrian bikemaker wants to capitalise on the current level of technology, range concerns notwithstanding. This is a sound business move as it’s always better to adopt newer technologies at the earliest. In January 2021, PIERER Mobility AG had envisioned in its investor presentation “existing European motorcycle and scooter market in the 50 – 125cc class will become 50% electric in the low voltage range on short distance within the next 10 years.” According to European Association of Motorcycle Manufacturers (ACEM), the calendar year 2020 witnessed a massive 50.5 percent jump in monthly new registrations of electric motorcycles over the previous year. This includes markets in Germany, France, Italy, Spain, and the UK.

These developments make it clear that e-bikes are fast gaining traction. More widespread adoption of electric technology will eventually bring down the development costs, and KTM seems to be on the right track. It will also help the bikemaker rope in newer riders looking for greener alternatives to 125cc bikes to learn the nuances of riding and, of course, commuting. All in all, KTM’s first electric street bike, the E-Duke, will be more of a proof of concept testing the waters in the promising EV space.

What about the charging ecosystem?

KTM signed an agreement with Honda, Yamaha, and Piaggio in September 2021 for Swappable Batteries Motorcycle Consortium -- you can read more about it here. However, the E-Duke will not have swappable battery technology, meaning this will still be a niche e-bike of sorts. The true mass-market electric bike from KTM will have removable batteries, helped by a network of charging stations. As for the E-Duke, KTM will likely join hands with local electric infrastructure companies in the respective markets to set up a fast-charging station.

In India, KTM can seek Bajaj’s help to set up a charging infrastructure that will benefit both the upcoming KTM E-Duke and the existing Bajaj Chetak Electric. However, it remains to be seen whether KTM and Bajaj deem the E-Duke suitable for the Indian market.

To make it a proper urban naked, the KTM will likely equip the E-Duke with practical features, including a TFT instrument cluster with smartphone connectivity and navigation. Expect other features such as keyless operation, OTA updates, and geo-fencing, among others.

Summing up, the KTM E-Duke could be priced at around Rs 2.5 lakh (ex-showroom) in India, if it ever launches here, that is. Even if it does, that will be quite some time away as we haven’t seen the electric bike yet. A realistic timeline would be end-2023, possibly in November (around EICMA). Let us know what you think in the comments below.