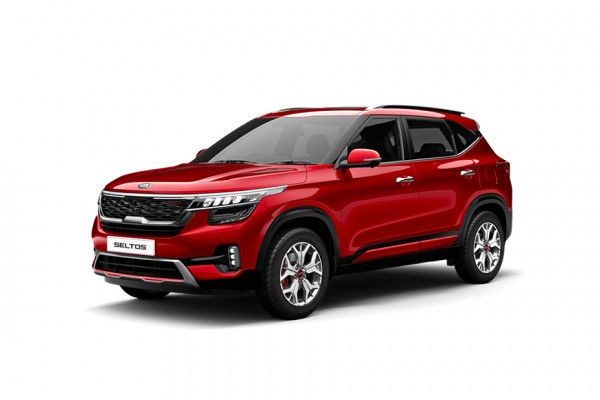 Kia Seltos is a 5 seater SUV car launched at a base price of Rs. 9.89 lakh in August 2019 by Kia in India. Seltos is available in both petrol and diesel . Seltos petrol is powered by 1497cc and 1353cc engine claiming mileage of 16.8kmpl and Seltos diesel is powered by 1493cc engine claiming mileage of 20.8kmpl. Seltos also comes with automatic transmission. Kia Seltos has a wheel size of 16 inch and ground clearance of 190mm. It is available in 18 variants and 12 colours.

Kia Motors has unveiled a radical Seltos concept called the X-Line at Auto Expo 2020. It is essentially a rugged version of the Seltos, with cosmetic changes to the front and rear end, as well as black and orange inserts. It retains both the feature list as well as its powertrains from the production spec Seltos. Since this is a one-off concept, it is unlikely to ever make it into production.

Kia has hiked the prices of the Seltos from Rs 20,000 to Rs 35,000 depending upon the variant. The updated pricing is already in effect and existing bookings made in 2019 are also subject to the hike.

Kia’s SP Concept has morphed into an SUV that’s called the Seltos. It will take on the likes of the Hyundai Creta, MG Hector and Tata Harrier. Dimensionally, it’s slightly larger than the Hyundai, and it’s got the squared-off SUV look we love so much. The Seltos will be offered in a total of 9 variants and five powertrain options! It's loaded with many features to set it apart in the crowded segment and notable features include a 10.25-inch floating infotainment system that supports Android Auto and Apple CarPlay connected to a Bose surround-sound system. Segment-first features include a head-up display, 360-degree camera with a blind-spot monitor, sound mood lighting, ventilated seats, etc. The Seltos also features Kia's 'UVO Connect' connected tech which is similar to Hyundai’s Bluelink system that debuted in the all-new Venue.

The Kia Seltos is easily one of the best looking SUVs in the compact SUV segment. Based on the SP COncept showcased at the 2018 Auto Expo, it retains the same upright stance and sits high off the ground as well. The Seltos is marginally bigger than the Creta in all parameters except for height. There are some interesting elements here too, including a clamshell bonnet and 17-inch alloy wheels finished in gunmetal grey. Features such as LED daytime running lamps, LED tail lamps and LED headlamps are also on offer. It also gets a sunroof. A rugged looking skid plate, coupled with the LED fog lamps also adds to the character of the SUV. Kia is offering the Seltos in eight single colour schemes apart from five dual-tone paint options as well.

On the inside the quality of materials as well as the fit and finish make it feel properly premium. The leatherette wrap for the flat-bottomed steering wheel, the switches and the chrome finish was upmarket. In terms of features, the 8-speaker 400W Bose sound system was plain delightful. It felt perfectly balanced and properly loud too. In the rear seats, better under-thigh support will be desired. However, the two-step recline adjustment and ample knee room will be appreciated. Highlights that buyers will hanker after include a panoramic sunroof, handy 8-inch head-up display (HUD), ventilated front seats and a 360-degree camera.

Renault Duster : The car that started it all, the Renault Duster is the only modern crossover in the segment to feature an AWD system. Its butch design, adequate space, CVT transmission (petrol), AMT (diesel) and all-weather ability help it score a lot of brownie points in the segment. Interior quality and limited service network make it less appealing.

Nissan Terrano : The Duster's better-looking cousin (for some), the Terrano suffers from being too overpriced for its own good. It does get a diesel AMT variant which is a good option for those looking for a convenient urban SUV.

Hyundai Creta : The Hyundai Creta might be a vanilla package but that doesn’t stop it from being a potent one. It’s got the mix of looks, features and drivability, ensuring that thousands of prospective owners throng Hyundai’s showrooms every month. The waiting periods can get annoying though, so be warned!

Renault Captur : The Captur brings some style to a segment of boxy SUVs. If you want to stand out in the crowd or while munching highway miles, the big Renault is worth a dekko!

Tata Harrier : We don’t see any major deal breakers with the Harrier. It’s loaded, spacious, drives well and is built like a tank. Tata’s best yet? Without a doubt.

Jeep Compass : It’s a Jeep thing, they say. And if you’ve always wanted one, the Compass is a great one to begin with. It’s rock-solid, built to munch miles and ready to get down and dirty. If you can live with the slightly small cabin, it’s a very capable SUV to have in your garage!

If you’re looking at buying an SUV in the Rs 10 lakh - 15 lakh bracket, we’d strongly suggest you take a good long hard look at the Kia Seltos. It's a compact SUV that looks super promising, offers a lot and from our first drive experience lacks very little.