Can Suzuki’s faired Gixxer SF 250 tempt riders to the 250cc segment once more? 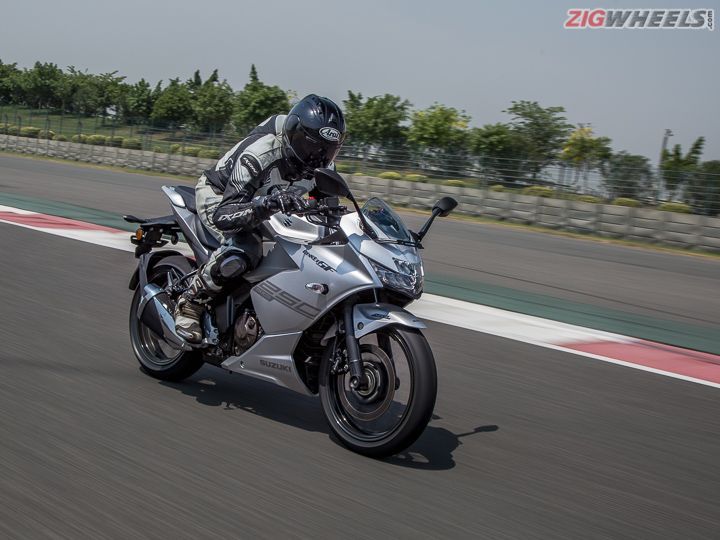 Riders haven’t cared much about the 250cc space in recent years. Why would we? Most 250s missed the wallet friendliness of the 200s while lacking the excitement and premiumness of the 300s. Suzuki has spent over four years developing this new 250cc Gixxer, so have they found the right balance with the new Gixxer SF 250?

Sorry, SOCS - Suzuki Oil Cooling System. That's a mini revolution happening underneath that sophisticated looking fairing, the engine design. While most oil-cooled engines have cooling fins, this Suzuki doesn’t. Because - it doesn’t need them. It’s cool, huh. Suzuki say a raft of patents have been applied for this made-for-India engine. It has the highest power-to-weight ratio in the class with its 26.5PS, which is on par with the liquid cooled CBR250R, and 6 PS more than the Yamaha Fazer 25.

The weight savings from the engine have obviously helped, as the motorcycle is about 6kg lighter than the CBR. But, the Fazer 25 is lighter by 4kg.

Is the new engine meant for everyday use? Or, sport riding? Both, answered Suzuki. Out on the Buddh International Circuit (BIC) we had plenty of opportunity to test one of those claims. Things checked out. The short-stroke engine revs to just over 10,000 rpm and power doesn’t trail off as it gets there. Hitting the 154kph (indicated) top speed was a fuss-free affair. The refinement of the engine was also pleasing, with just a light tingle creeping in at high revs.

Rolling into corners, dropping a gear on the 6-speed gearbox felt incredibly smooth, although the lack of a slipper clutch might annoy track day riders. While competent on the track, the way the SF 250 behaves signals a more mature and versatile motorcycle.

It better be better! The Gixxer legacy in India has been built on that. To do so, there is a beefy new frame (spine is .3mm thicker). And we are calling it new because it is also shared with the smaller SF. As are the 41mm front forks and the rear mono shock. However, the state of tune between the two motorcycles is different keeping in mind the added 16kgs. To help with agility the rake angle is sharper and the trail is also reduced. Also, the SF 250 boasts of radial tyres using a 150/60 profile at the rear, the widest in the class!

So, is it better? There’s no straight answer for that. Is it different and good? Yes. The SF250 isn’t like the Red Bull-fuelled, crazy, but loveable athlete, the smaller SF. On the seemingly weightless Gixxer SF, you can be utterly spontaneous, even careless when changing directions. The 250 has a more measured and mature attitude. We wouldn’t call it slow to turn, but it requires a bit of thought.

The 250, despite the ultra compact wheelbase (15mm less than the Fazer 25 and 24mm lesser than the CBR250R) feels very planted and the MRF REVZ-C’s coped well too. The strong engine will let seasoned riders whip out rapid laps, but it might not feel the most exciting while doing so. For hard track use the large 300mm front disc didn’t give the necessary sense of confidence as the ABS intervention was a bit unpredictable and the feel at the lever was lacking. But, those of us who aren’t hunting for the fastest lap times all the time will find the SF 250 a more comforting motorcycle.

Is It A Sport Tourer?

That is a great idea, because it would be an able one. The smooth engine and the calm handling would make big journeys a joy. Cruising at triple digits would be stress-free and satisfying. The small windscreen raises some questions about wind deflection, but we’ll wait for a real-world test before we pass judgement on this front.

The fuel tank range could be a concern too as the 12-litre tank capacity is smaller than the competition, and the claimed 38.5kpl fuel-efficiency isn’t a segment benchmark either.

The urban grind’s edge will be rounded off by the SF 250’s torquey engine, smooth gearbox and light clutch. The slight leaned forward stance, courtesy of the clip-on bars, isn’t bothersome for extended use. The 800mm high rider’s seat, although the tallest in the class, allows even 5’6” riders to get their feet down flat. The split seats suggest sportiness, but its width and cushioning suggest adequate comfort for your companion.

Annoyingly, yes. There are subtle visual cues that differentiate the two siblings, like the chunky design for the fork legs, diamond cut alloy wheels, bigger bar-end weights and the tyre patterns.

What will matter more to a buyer, like the design for the edgy all-LED headlamp, the handsome fairing, the dual-barrel exhaust and the all-digital instrument cluster (the 250 gets a negative blue display), are the same as the smaller Gixxer SF. The obvious difference would be that the SF 250 is available in matte black and silver colour options, whereas the SF 150 wears glossy finishes. The design is polarising, but more dynamic colours would have helped raise the excitement levels. Suzuki says that a MotoGP-inspired colour scheme will be introduced later.

The SF 250 has shown that it has a different attitude from its sibling. This calmer and more mature motorcycle seemed a bit disappointing in the confines of a race track at first. However, as we spent more time hanging off the saddle and into corners, the SF 250 grew on us as a sporty motorcycle and more importantly, as an everyday ride. The price tag isn’t going to tempt 200cc customers, but the hardware on offer ensures that the SF 250 offers solid value. Suzuki’s Gixxer SF 250 is going to draw more attention to the 250cc category while things heat up for the 200s and 300s! But, would calling this a Busa 250 have made its task easier?

Suzuki Gives The MotoGP Treatment To The Gixxer...