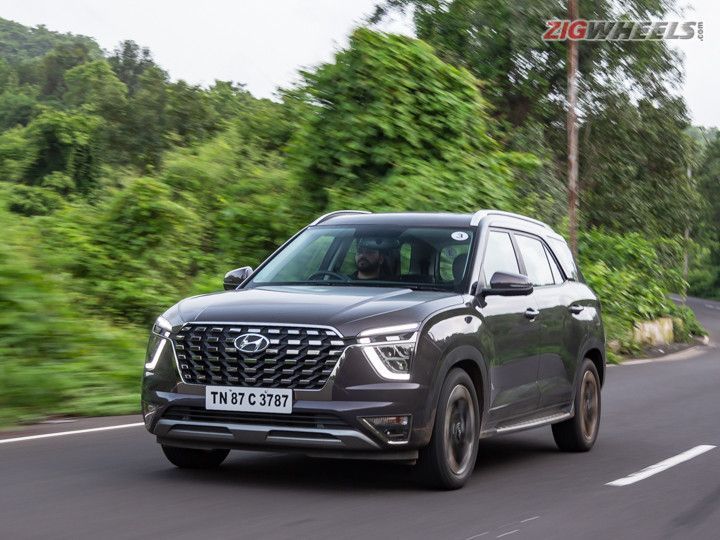 You might buy into the idea of the Alcazar if you hear ‘please adjust’ quite often or are uneasy with the thought of having a relative sit on your lap for a short trip across town. This new SUV from Hyundai promises some flexibility with an added row of seats when you need it, and a large boot when you don’t. You can spec one with captain seats too if you detest anyone intruding on your personal space. All of this is bundled with the familiarly loaded package we’ve known as the Creta. Sounds like a game-set-match for Hyundai, right?

Hyundai hasn’t bothered hiding the Creta origins of the Alcazar, and that’s a good thing. Like most elder siblings, the Alcazar is longer and taller. A 150mm stretch in wheelbase means larger doors and a flatter window line that looks a lot more sombre. We like how the extra length has been incorporated cleanly by subtly extending the defining lines of the design. The design of the one-size-up 18-inch alloy wheels is a hit or a miss though.

We also can’t shrug off the disconnect between the front and rear end design. The front screams for attention, making the rear seem a tad too simple in comparison. Hyundai has stretched the grille under the daytime running lamps and embellished it with Palisade-inspired ‘studs’ finished in dark chrome. This could easily end up looking gaudy, but we’re glad Hyundai has managed to keep things classy.

Comparisons with the Endeavour or the Hexa’s tail are quite natural too given the simple rectangular tail lamps and the large connecting chrome bar with Alcazar embossing. A neat touch comes in the form of twin tailpipes jutting out from the bumper. If you pick the petrol, you get a tiny 2.0 badge on the boot to point at and brag.

Can the Alcazar seat six or seven adults? With a bit of a squeeze, it can. It’s better off for four adults and two kids considering this 7-seater isn’t any wider than the 5-seater Creta. The primary hiccup then becomes the sense of space. You won’t feel like you’re in a particularly large car, especially in terms of width.

Compare the maximum kneeroom back to back with the Creta and you’d be surprised to see the Alcazar’s second row feeling a little tighter. It’s the fold-out trays that take away the final few millimetres of kneeroom. Another surprise is that the seat back is actually taller on the Creta, giving 6-footers some additional support around the shoulders.

But the Alcazar does aim to pamper, especially in the 6-seater version. The seats are wide and supportive, and a great place to unwind after a long day of work. To make the experience that much more relaxing, Hyundai has added a floor-mounted central console that has an armrest with in-built storage and even a wireless charger for your phone. The fold-out picnic trays also feature pop-out cup holders and a slot to park your iPad. Smaller bits such as the plush neck pillows and the ambient lighting extending over to the rear doors bolster the Alcazar’s credentials as a chauffeur-driven car.

For the family man, the third row should have no issues accommodating kids. Adults can fit in here too — three 6-footers can occupy the three rows — but not for long. It’s easier to be comfortable in the 6-seater version since you get some space between the second row seats to stretch a leg. In the case of the 7-seater, you’d be shifting and jostling trying to find foot room under the second row. We do appreciate the armrests, the AC vents, and the dedicated USB chargers. Also, whether you pick the 6-seater or 7, one-touch tumble for the second row ensures getting in and out of the third row is easy.

You could also view the Alcazar as a Creta with a really large boot. There’s no official number yet, but you get about 579-litres of cargo volume here with the third row folded. This is plenty of space for your pets or a whole lot more luggage. If you spend a lot of time road-tripping with four onboard, the Alcazar is more than accommodating. With all three rows occupied, there’s a healthy 180-litres of space to spare. That’s enough for a couple of soft bags for that quick weekend trip.

Surprisingly, Hyundai hasn’t bothered with a ‘base model’ for the Alcazar. We say that because the most affordable ‘Prestige’ variant packs in quite a lot of kit. This includes LED headlamps, 17-inch alloy wheels, a 10.25-inch infotainment system, a 7-inch digital driver’s display, and a panoramic sunroof. The starting price of Rs 16.3 lakh (ex-showroom) suddenly doesn’t pinch as much. Move up to the mid-spec Platinum variant and you get a Bose branded sound system, leatherette upholstery, and a powered driver’s seat.

The party piece from this variant onwards is certainly the 10.25-inch fully digital instrument cluster picked straight from the parts bin of the global (next-gen) Tucson. With a crisp display and configurable themes, this instrument cluster levels that of cars that cost more than twice as much. Another neat addition is the integration of the feed from the side view cameras into the speedo and tacho pods. That brings us to the next feature unique to the Alcazar: a 360-degree camera.

This feature opens up a host of views on the touchscreen, including a top view with guidelines for steering position that help parking in tight spaces. We do wish the side cameras had a wider lens, enabling a feed that not only has more width but also height. Also, looking down at the instrument cluster doesn’t feel as intuitive.

Picking the absolute top-end Signature variant gets you front parking sensors and ventilated front seats. You get practically everything you need. Even in the safety department, the Alcazar gets four disc brakes, dual airbags, ABS with EBD, hill start assist, vehicle stability management, and a tyre pressure monitoring system as standard. A total of six airbags are available from the Platinum variant onwards.

We’re going to take a slightly controversial stand. Between the 1.5-litre diesel and the 2.0-litre petrol, we’d happily pick the diesel. Once the spec sheet drivers are done collectively sighing in disbelief, allow us to explain.

First, let’s set expectations. If you’re hoping for a surge of torque that pushes you towards the horizon — like the Safari does for example — this diesel isn’t going to impress you. However, if your driving style entails a calm climb to 80-100kmph and a steady right foot, you’d have no issues with the fact that this engine makes ‘just’ 115PS and 250Nm.

Hyundai has also played around with the gear ratios to suit the additional 80kg that the Alcazar lugs. Keeping this motor spinning over 1500rpm lets you tap into all of the torque. This means in-city driving is a breeze, but overtaking on the highway takes some planning. On inclines, especially with a full load, you’d end up being in a gear lower to ensure you have adequate torque to overtake. If you buy the automatic, the gearbox should take care of this.

The 2.0-litre petrol raises eyebrows, considering Hyundai had a potent 1.4-litre turbo ready. This naturally aspirated engine is just the right companion for a chill drive. Power delivery is smooth and relaxed, best suited for laidback cruises and calm city commutes rather than attacking gaps in traffic. Shifts from the 6-speed automatic are smooth, but again it prefers if you keep a light right foot. Slamming on the gas has the gearbox behave like a CVT almost, holding the engine up to its redline making it sound coarse.

Bottom line, take it easy with both engines and you’ll have a relaxed experience.

It also helps that getting used to the dimensions of the Alcazar barely takes any time. You can weave in and out of a bad traffic jam confidently. Similarly, ride quality is expectedly comfortable over smooth roads. Over broken roads, you’ll notice the Alcazar with its 18-inch wheels rides firmer than the Creta. This means some side-to-side movement over the large potholes and speedbreakers. High-speed manners are satisfactory both in terms of insulation and stability. However, it does transfer the wavy, uneven surface into the cabin at highway speeds.

Needless to say, the Alcazar isn’t meant to attack corners. The higher ground clearance (200mm vs 190mm for the Creta) and the taller height means it rolls noticeably through tight turns. This is amplified with occupants on board, so be sure to account for this during the next trip to the hills.

One To Rule Them All?

Hyundai’s asking up to Rs 2.3 lakh over the equivalent Creta for the Alcazar. It’d be even more convincing if this gap was capped at around Rs 1.5 lakh-Rs 1.8 lakh. That said, even with prices ranging between Rs 16.3 lakh and Rs 20 lakh (ex-showroom), the Alcazar spoils you silly with feel-good features. You don’t even have to buy the top-spec variant to feel special.

The Alcazar is clearly a 7-seater for the urban jungle. One that can seat four in luxury, five with ease, six at a stretch, and seven with a squeeze. It’s this flexibility that becomes the Alcazar’s trump card. You always have a large boot should you not need the third row. It’s also loaded with just the feel-good features you need. It’s also unintimidating. The size is easy to get used to, and both engines are tuned to be relaxed daily drivers.

If all you need is a feature-loaded family car, the Alcazar can be the only car in your garage and yet make it complete.