Is there more to BMW Motorrad’s much-awaited G310 twins than just badge value? 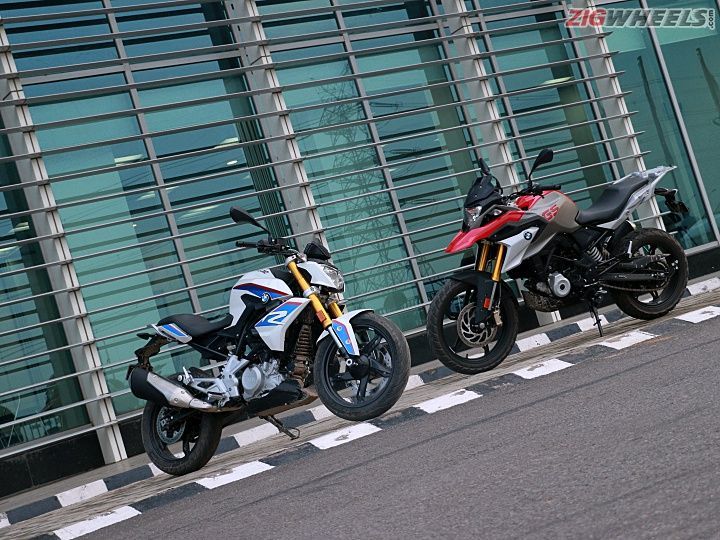 Three lakh Rupees ex-showroom seems like a lot of money for a 310cc single-cylinder motorcycle. But that’s exactly where BMW has priced the recently launched G 310 R. And that pricing is quite surprising considering that this bike shares pretty much everything - chassis, engine, suspension, even the wheels, with the TVS Apache RR 310, which is almost Rs 75,000 cheaper. It gets crazier with the GS, which is half a lakh Rupees more than the R. But what makes these bikes so special and so expensive? Well, some of that has to do with the BMW badge and all that it represents.

Now both these bikes look like pukka scaled down versions of bigger BMWs. The G 310 R clearly draws inspiration from the larger S 1000 R. And the G 310 GS… you can see the GS family lineage right in its design. If we had to pick one bike just for its design though, I think it would have to be the GS. Its proportions make it look like a much larger capacity bike - something along the lines of a 500cc machine.

And that’s surprising considering that the G 310 GS shares a lot of design elements with the G 310 R, such as the headlight, taillight and even wheel design. But its headlight is mounted high and features a prominent ADV-style beak, which integrates nicely into the tank. Though its tank has the same capacity as the R, it features different panels.

At the back, the grab handles extend into a small luggage rack. And true to its ADV character, a front wheel is a 19-inch unit.

While the GS looks tall and athletic, the R looks squat and muscular, with its wider tank panels, large tank extensions and low stance. Even the tail rakes up a little more sharply compared to the GS for a sportier look.

Just like the bigger BMWs, the build quality, including panel gaps and paint finish, is top notch - much better than any of its competition. But if we had to nitpick, none of the other lights are LED except for the tail light, and the full-digital instrument cluster, though informative, looks absolutely tiny.

With a seat height of 785mm, literally, anyone of any height can get their feet down on the ground pretty comfortably on this G 310 R. In fact, in this segment, this is the lowest seat height that you can get.

You have a little lean towards the handlebars, but the bars themselves have a slight drop to them and are tilted a bit towards the rider too. The end result is a slightly aggressive posture which feels quite natural.

But while the seat is very comfortable, the space between the pillion section and the tank is quite tight. So if you’re on the larger side, it is going to be a bit of a squeeze.

With the G 310 GS though, you are talking about a serious seat height. At 835mm, it’s actually taller than the low seat setting of the Indian version of the Honda Africa Twin. Which means even climbing on this bike is no easy task.

And even with its soft suspension, it’s no easy task to get your feet flat on the ground. That said, the seat itself is quite comfortable, and the reach to the bars is also a lot less compared to the R. So you end up sitting quite upright. But while the posture is fantastic for long hours in the saddle on the highway, when you’re standing on the pegs for riding off-road, the handlebars feel a little too low, making you lean quite a bit over them.

Off-road junkies will need to get some taller handlebars then.

Now both these bikes share the exact same engine, and it’s an engine we’ve experienced before on the TVS Apache RR 310. In fact, between these three motorcycles -- the TVS and these two BMWs -- the engine makes the exact same power and torque figures: 34PS at 9500rpm and 28Nm at 7500rpm.

This is a quite a unique engine in its class thanks to its reverse incline layout that has allowed for much better mass optimisation. Though the ratios of the 6-speed gearbox remain identical for the BMWs and the TVS, unlike the Apache, neither of these gets a slipper clutch. That said, shifts are extremely smooth and precise, with a light clutch action too.

But the G 310 R feels a bit peppier of the three bikes because, at 158.5kg, it’s the lightest one of the lot. There’s lots of mid-range grunt available, and the motor is very tractable as well. It pulls cleanly from speeds as low as 45kmph in 6th gear.

On the GS, there’s not much of a difference in performance, but it feels a tad slower than the G 310 R. It does weigh in at 169.5kg after all. BMW claims a top speed of 143kmph for both the bikes, as well as an efficiency of 33kmpl, which is in keeping with what we achieved with the Apache RR310.

Now one aspect of this engine that we were a bit concerned about was vibrations because we experienced them on the Apache RR310. These two baby Beemers aren’t exactly vibe free, but the vibes do feel a lot better damped.

Their handlebars are rubber-mounted so you don’t feel too many vibes in your hands. However, there is a bit of a buzz in the footpegs which starts at about 6000rpm. And at any rpm above that, you do get a bit of buzz in the tank panels as well. Thankfully though, the seats remain almost completely vibe free, even up to the redline.

Both the R and the GS share the same trellis frame, with just a minor alteration in the sub-frame. Suspension wise, the R shares its setup with the Apache RR310 - beefy 41mm forks at the front and a preload-adjustable monoshock at the back. And the rake angle at the front is tighter than the GS’ by than 1.6 degrees (25.1 degrees vs 26.7 degrees).

Now with a tighter wheelbase of 1374mm, compared to the GS’ 1420mm, the G 310 R really impressed us with its handling. While we didn’t really get any corners to test these bikes’ handling to its limits, in traffic, it felt very nimble and changed direction really quickly.

When it comes to suspension, yes, the R is set up a little bit on the firmer side. But through bad roads, potholes and bumps, it’s never really a problem. The ride never really feels jarring and was actually very composed over the sort of roads we experienced in Gurgaon.

Now one area where the G310R really outdoes its adventurous sibling and its TVS cousin is the brakes. It runs a single 300mm disc at the front and a 240mm disc at the back. While these are the same size as the Apache’s, the BMWs run solid rotors, unlike the TVS’ petal ones. That said, BMW’s brakes offer great bite and plenty of feedback, the latter of which was severely lacking on the TVS. Even the ABS modulation has been changed a little bit and doesn’t cut in as early now.

The GS’ suspension components might look similar to the R’s, but its forks run completely different springs as well as cartridges. While its front is a little more raked out than the R’s, thanks to a bit of fork offset, its trail has been reduced, keeping the steering feeling light.

To say that the GS is softly sprung would be an understatement. While this soft suspension setup isn’t great for cornering - it does tend to wallow a bit through the turns - there is an upshot and that is fantastic ride quality. This baby GS just glides over broken roads, bumps, and potholes with the utmost of ease. And even when you’re off-roading, this soft suspension really works well.

That said, the GS does feel quite light on its feet despite its weight disadvantage over the R. Firstly, because you’re sitting so high up, you have a much higher centre of gravity, making the bike want to change direction quickly. This is assisted by the wider handlebars, which provide more leverage to turn the bike. And even though it’s front end is more raked out than the R’s, thanks to its wheel offset, it manages a tight trail of 98mm, which keeps the steering light.

With 180mm of suspension travel at both ends and enough ground clearance to fit a medium-sized dog, the G 310 GS can handle some light off-road duties very comfortably. And supporting that is the 19-inch front wheel and the Metzeler Tourance tyres, similar to what we’ve seen on the Triumph Tiger 800 XRx, albeit in a slightly smaller size (same as the R). And these work really well, both in the dirt and on the road.

One real downside to the GS’ really soft suspension, though, is the braking. While it does run the same braking setup as the G 310 R, there’s just so much dive at the front when you go on the brakes that you’re just not stopping as quickly.

The G 310 GS sports the same brakes as the R, the only difference here being that the GS gets a switch on the left handlebar to disable rear ABS for some fun when riding in the dirt.

So where does that leave us with the G 310 twins? They offer a decent amount of performance in their category, they offer great styling and they offer that quintessential BMW badge. But are they worth their asking prices? Now that’s a tricky question.

The G 310 R here is clearly the more fun bike of the two, but then it’s got some strong rivals in the form of the KTM 390 Duke, which offers more performance and features, and even maybe the Apache RR310, which offers the same kinda performance and more features as well. You’re going to have to really crave for a small BMW roadster to go for the G 310 R.

The GS, on the other hand, is a little bit easier to recommend mostly because there aren’t any direct rivals, at least for now. The Himalayan is half the price, but it also feels like half the bike. The Kawasaki Versys-X 300 is over a lakh Rupees more expensive and isn’t offering a significant bump for performance for that.

And the KTM 390 Adventure... that’s still some time away. So at least for now, if you want a small-ish, somewhat affordable ADV, that’s more touring than outright adventure, the BMW G 310 GS is your only choice, isn’t it?