Can the C3 stand out amongst the many hot-selling hatches and sub-4m SUVs? 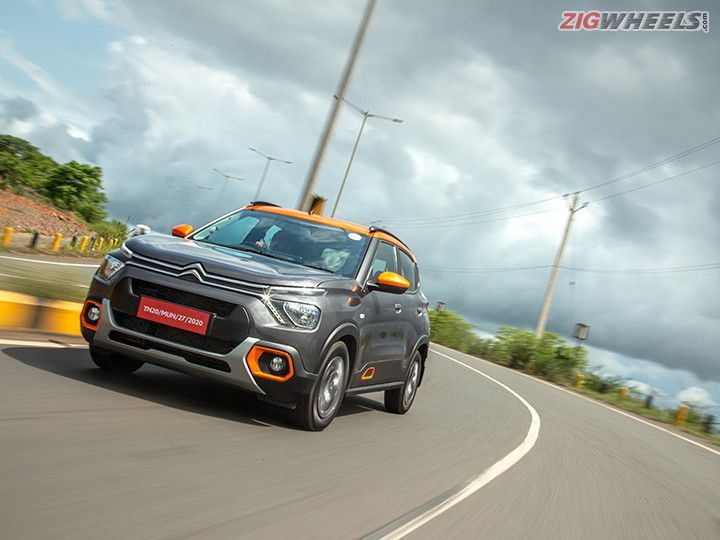 Citroen’s made-for-India, made-in-India C3 has been their super hush-hush and top-priority project that was announced in 2019. The tight wraps around it were cast aside when the world got leaked pictures of its scale model! But then the questions arose: Would this be the India-spec model? What would it be like? Can the French really get things right for the tough Indian market? What are they going to bring to India, a hatch or an SUV?

The C3 is a sub-4 metre segment offering, but it isnt an SUV. Usually when Citroen make an SUV, they badge it as Aircross, but the C3 isn’t that. Instead, Citroen are calling it a premium hatchback with an SUV twist. Sounds interesting? Half a day with the C3 in Goa showed that it was more that just interesting. Sure, Citroen could have done some things better and some things differently, but if I was an engineer responsible for the C3, I'd be damned proud of myself. Let me break it down.

Doesn't the C3 look chunky? Like the Brezza, Sonet and Venue, its length is just under four metres. Its height is more than the Nissan Magnite and just a bit less than the Hyundai Venue's. And its wheelbase is longer than any of these SUV-esque rivals. As a result the C3 looks wide and willing; rugged elements, like the skid plates at the front and rear, and the body cladding down the side emphasise its SUV-ish traits.

Its 180mm of ground clearance, is more than the hatchbacks', but that’s still ten millimeters shy of really cracking the sub-4 metre SUV segment. When you consider that Citroen are calling this a premium hatchback with an SUV twist, it feels just about right.

Citroen's design character is obvious when you look at it from the front with the forked LED elements and the chunky tail lamps. There are interesting touches like the scooped out, or concave, sections around the headlamp and tail lamp, there’s the handsome design for the wheel covers, and the contrast elements (optional extras) in bright orange for the fog lamp surround, floating roof and the accents on the body cladding. The design is distinctive and not polarizing, which in my books is a great outcome.

For now, just ignore what the C3 misses out on, because that list is long and needs a dedicated space to itself, so we’ll tackle that later. Also, the basic design and sensibility of the C3 gives you a lot to appreciate. For starters, the doors shut with a solid thunk and the the panel gaps are very consistent. On the inside, the air of substance grows as you look at the handsome fabric for the seat covers; the orange contrast stitching gives it a bit more appeal too.

Even the plastics for the door pads look good and feel solid, and that's even when you look at the plastic that's on use inside the door pocket. Impressive? Heck, yeah.  There’s more. Citroen say that the C3 has theater style seating, and that’s because the hip point is 27 millimeters higher than the front seats. And sitting here, you do get much better vision out of the cabin and the cushioning is really nice and supportive. Space is plentiful too, even with a six-footer in the driving seat another six footer could be accomodated in the rear comfortably. As for seating three adults in the rear, city jaunts should be no issue.

Look closely and you will notice thoughtful touches, like the two USB charging points for the rear occupants. Then there’s the clever design for the phone holder that allows you to route your cable underneath without bending it too far. The centre console at the front gets built-in cable guides and a spot to mount a phone holder. There’s lots of storage in the centre console and the door pockets aren’t XL sized, but sufficient.

The space at the front is enough, even for taller occupants.  The seats are positioned higher than they would be in a hatchback, and the view out is good, offering a commanding view. The dash has an air of quality thanks to the shimmery burnt-orange finish, or the chrome finish around the air-con vents, which look and feels very well executed. The attention to detail can be felt in the well-damped manner in which the air-con vents move.

Then there is the air-conditioning system, which is said to be engineered to cool the entire cabin with the blower speed at two. Why? Because Indians don't like the noisy higher settings. On the very sultry morning that we drove the C3 in Goa, to my surprise, I didnt have to exceed the 1st speed.

The 10.2” infotainment system also felt impressive. Its display was bright, and responsive, and it packs wireless, Android, Auto and Apple, CarPlay too. The great bit is that the 4-speaker sound system was enjoyable! So the cabin experience simply does wow.

Most of us Indians were introduced to Citroen through the C5 Aircross, which premiered the “Advanced Comfort” tagline. As it turned out, the C5 aced the comfort factor with its seats, suspension and India readiness. However, when you go from a Rs 40 lakh vehicle to something under Rs 10 lakh, you'd expect the experience to get diluted. However, it's a bit different because the C3 is actually pretty impressive.

Firstly, that's because the C3 soaks up rough roads, potholes and broken patches in a manner that would make a multiple time WRC winning company proud. Which Citroen is! The C3 makes bumps disappear and it doesn’t bob or bounce. The tall sidewalls for the tyres give it added cushioning that lets the C3 just glide over broken roads. It’s absolutely wow on this front!

Well, there's more. Citroen say that the C3 is meant to be fun to drive too. As it turns out, despite its comfort factor, the C3 isn’t soft and sloppy at high speeds. Sure, the suspension is supple, but it is also controlled. In bends at high speeds there’s a bit of body roll but then it settles down. It actually feels composed and stable even over 120kmph! So, Citroen’s rally pedigree can be experienced in the way the C3 soaks up bumps  and the way it likes to be hustled too. The 195 section tyres from Ceat deserve credit, but a lot of the magic is baked into the chassis and suspension. The flat-bottom design for the steering wheel feels sporty, but the way it weighs ups also instills a sense of confidence at higher speeds too. So, this small package feels very impressively grown up in its manners.

Citroen kept us guessing on the powertrain front too. As it turns out, there are two 1.2L petrol engines, one being naturally aspirated while the other is turbocharged. Usually, in cases like this, the turbo-petrol out dazzles its sibling, but that isn’t the case here.

First and foremost, the naturally aspirated engine feels smooth, and damps any thrum. Second, it doesn't sound noisy either. The clean power delivery and the resulting drivability makes it easy to use in all kinds of conditions. The gearshifts on this five speed gearbox are smooth, the clutch is light, which means everyday commuting duties will be breezy.

It  will get up to highway speed without strain or hurry and it will cruise easily. But you will have to work the gearbox when you want to make an overtake or really pick up the pace. Actually, there is a fair amount of torque on offer from the engine, however, the gearing is very tall! We observed a speedo indicated 54kmph, 99kmpkh and 148kmph in the first three gears! This makes accleration feel a little laidback, but it also helps deliver a claimed fuel efficiency figure of 19.8kmpl.

However, if you want more punch, you’d want the turbo. Obviously, it packs a lot more torque and power, which is great for those who spend more time on the highways or just want something peppier.

However, there is a caveat - the clutch pedal is heavier and there’s no automatic on offer for now, which in my books is a big miss.

The C3 is a bit ougunned on some fronts. At 315 litres its boot space isn’t in the SUV territory of the sub-4m population. While thise isnt a deal breaker, there are other misses, many misses. There are no wow features, like a sunroof, or ventilated seats. It misses out on powered ORVMs, a wireless charger or a cooled glovebox. It even lacks modern day essentials like an auto-ac, rear defogger and wiper. Sure, there’s no 360 degree camera, but even the reversing camera is an optional extra.

Conveniences such as an armrest for the driver, or for the rear bench are missing and the power window switches for the rear doors are nestled between the front seats. The hood release is very rudimentary and so is the driver’s instrument cluster, which lacks even a rev counter. In terms of safety feature it has ABS and dual airbags; however, the headrests non-adjustable.

It might seem shocking, but the C3 doesn't feel like it has cut corners, because what it has, works, perfectly. For instance, the cushioning and design for the headrests provides great support. In the same vein, the tail lamps and headlpams do not get any LED elements, but they look handsome. The door handles are flap type, but they feel solid. And, yes, the C3 gets steel wheels with handsome designs for the covers, but if you wanted you could get alloy wheels as accessories.

This is where things get a bit interesting because Citroen are trying a different formula. For starters, instead of packing the C3 with features from the factory they will offer accessories that can be installed at the dealership level so that buyers can customize their C3s. Over 70 accessories and  five packs will be offered at first. Secondly, Citroen will allow you to to configure and book your car online and then have it delivered to your doorstep; and you can do the same for a service at no extra cost.

But that's a promise, a big critical promise and because Citroen will have all of 20 dealerships when the C3 goes on sale. So Citroen is doing things differently and they are unlocking value, or at least trying to unlock value, which is where my sense of disappointment with the kind of features on offer and where this is likely to be positioned is turning to cautious optimism.

If the business people have done their homework as well as the engineers and designers, the C3 should be priced spot on too! In our books, that price would be in the Rs 5.5 lakh- 7.5 lakh range, but we'll only know for sure when it launches on the 20th of July. Until then, you can put your thinking caps on and let us know in the comments what you think would be a good price for this Citroen C3.