The all-new Hyundai Verna steps back into the ring with the Honda City looking for some payback. Who wins? 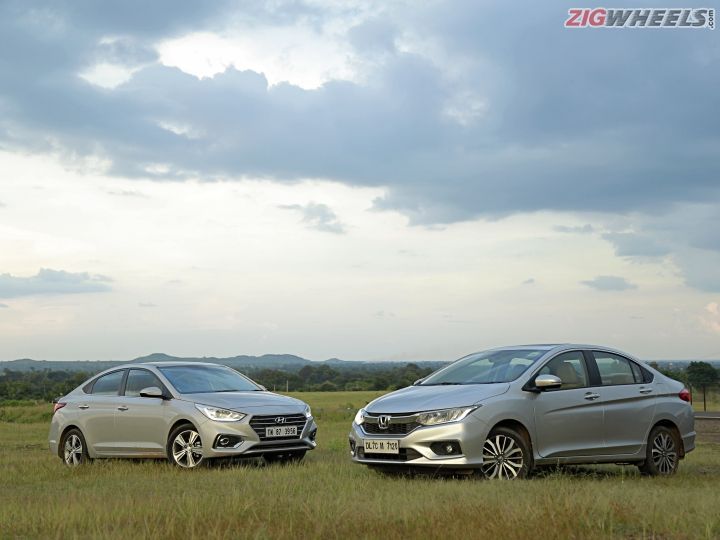 The good old family sedan is facing a challenge like never before. It has to deal with the onslaught of SUVs, keep themselves relevant among a sea of compact sedans and do all of this while fulfilling the needs of an extremely demanding customer base. You see, as the asking price goes north of a million, the expectations goes through the roof too. So, they have to be easy to drive, be comfortable and spacious for the family, the driver and the driven. Asking quite a lot, are we? Ahem, they also have to be loaded with the latest gizmos, and, let’s face it, give you some snob value too. Phew. Quite a lot, eh?

But then - it’s cars like the City and the Verna that’ve long delivered on these fronts. It was only a matter of time before the latest iterations squared off, didn’t they. So, we rang up Honda and Hyundai - borrowed the top-spec petrol manuals and got our road test hats on. Sit tight.

Start From The Back

The Verna isn’t a car you should pick if rear-seat space is a priority. Pushing the front seat all the way back results in a space that’s nearly unusable. But, set the front seats at a reasonable position and things get marginally better. I could tuck in behind my own driving position (I’m 5’11”), without discomfort. But, there wasn’t much room to wiggle about - in terms of kneeroom or headroom. Plus, there’s this feeling of being cramped that the Verna just can’t shake off. And yes, the cabin is better suited to four, and not five occupants.

On the other hand is the City that happily accommodated a 6.5-foot tall Tushar behind his own driving position. We made him cross his legs too, and he could. If that doesn’t give you an idea of how spacious the City is, check out the numbers in the table. The difference in maximum legroom is 160mm! Also, the cushioning is a notch softer and there’s some extra headroom too. In fact, Tushar kept drawing parallels to the Corolla Altis we sampled a couple of months back. The City truly feels like a class above in this department.

It’s not just the cabin space. The boot space comes in a surplus, too - 510 litres compared to the Verna’s 480 litres.

Let’s get the common bits out of the way first. Both cars you see in pictures get segment staples including rear AC vents, front and rear armrest, automatic climate control and leatherette upholstery. Yes, before you ask, both cars get a sunroof. So, there’s some respite for the sunny days. PSA - don’t let your kids stick their heads out of ‘em.

So, what does the City get that the Verna doesn't? For starters, there’s telescopic adjust for the steering wheel that the Hyundai misses. Naturally, it’s a lot easier to tailor your driving position in the Honda. You sit low, ‘wrapped’ by the cabin - and that’s a feeling we quite like!

Then there’s Honda DigiPad that supports Wi-Fi and HDMI. While we’re still scratching our heads for a use of the HDMI port, the WiFi does come in handy for some web browsing. Also, the six-speaker sound system paired with the touchscreen on the City sounds a lot crisper compared to the Verna. There’s more body to the sound, and we guarantee you won’t feel the itch to upgrade audio unless you’re a hardcore audiophile.

There are issues, of course. The DigiPad itself is a bit wonky to use. Since it runs Android OS, it has a tendency to lag. For example, skipping through tracks using the steering-mounted controls took a full three seconds. Then there’s the fact that the screen looks forcibly slapped onto the dash. It just doesn’t gel with the otherwise chic-looking dash.

Au contraire, the Verna’s touchscreen looks like the dash was designed around it. It’s got the upper hand in terms of response as well. Not to mention, there’s Android Auto and Apple CarPlay that the Honda weirdly misses out on. Also, the resolution of the camera that the screen acts as a display for is a lot better. There’s attention to detail too - the parking guidelines turn with steering input. But, what really catapults the Verna a notch above the City are the two features it borrows from the big brother.

First up, the ventilated seats. It’s an absolute boon in our tropical weather conditions. It’s refreshing to have a flow of cold air on the back on those long highway trips. Then, there’s the handsfree boot-release. What we initially passed off as a gimmick, is something that’s properly useful. It does work as Hyundai claims, and is super convenient when you’ve got your hands full with luggage.

Oddly enough, it’s the older car that looks more edgy. And, Honda has been wise enough to not tinker with the design too much. The side and the rear are practically the same save for the new wheels and the rear bumper. Bear in mind, the top-spec petrol manual is the VX, and not the ZX. So, you do miss out on those swell-looking LED tail lamps. But, the front apes the Accord, and that’s a good thing. Honda’s flying H grille doesn’t look over the top, and those all-LED headlamps add a classy dimension.

The theme flows inside the cabin too. Honda has played around quite a bit with shapes and textures on the dash. Save for that touchscreen that sticks out like a sore thumb, the design is cohesive. The soft-touch stitched portion on the dash, the touchscreen climate control, the asymmetric AC vents - all play their part in making the cabin look and feel wow.

Step inside the Verna, and it’s a bit blah. There’s absolutely nothing wrong with quality, fit or finish. It’s a please-most-offend-none design and it misses the mark as far as the wow factor goes. It’s almost as if Hyundai was so fanatical in getting the little details right, that they didn’t pause and take a look at the bigger picture.

Or maybe they did, but continued anyway. Because, Hyundai tells us they deliberately made the Verna a bit sedate. That’s more evident when you take a good look at how the car looks on the outside. Yes, it’s still unmistakably Hyundai, but the funky flavour has been watered down. It’s still likeable, though. The sloping roofline, the wraparound taillamps and the large cascading grille give it that Korean character.

For the longest time, Honda petrols have been the pinnacle of refinement. But, with this iteration the Verna has the clear upper hand. On start-up, idle and on the move, it’s the Hyundai that’s perceptibly quieter. The City sounds louder, but only in comparison. In isolation we doubt you’d call it a noisy motor.

On paper, the Verna gets the bigger engine with better figures. But, those 123 horses under the bonnet have been trained to take it easy. That makes everyday life behind the steering wheel stress-free. The 1.6-litre engine has so much pulling power in the lower half of the rev range, it got us scratching our heads as to how Hyundai managed to pull it off. Like we pointed out in our first drive, it will excuse you if you shift to sixth at 25-30kmph. Put your foot down, and it pulls clean! As a result of this, you’ll find yourself in one gear higher compared to the Honda. So, no surprises then that the Verna was a touch more fuel-efficient inside the city at 14.82kmpl (vs 13.87kmpl).

The City continues to be easy to drive inside the, err, city. Like always, the clutch, steering and gear-action is nice and light. But, as is typical of i-VTEC motors, you really have to rev it to get it to perform. It doesn’t manage low-speed-high-gear combination as well as the Verna. Naturally, there’s a bit of work you need to put in when commuting. But, the engine remains as easy to drive as it always was. There’s no learning curve here, you’ll feel at home with it almost immediately.

Both are at equal ease on the highway and can hold triple-digit speeds all day long. If you aren’t flat-footing it, they won’t be heavy on the pocket either. On test, there was no separating the two. The Honda delivered 19.21kmpl whereas the Hyundai managed a near-identical 19.13kmpl. But, we felt the drive was a bit more relaxed in the Verna. And that (again) has a lot to do with it being quiet and calm. Hyundai has tinkered with the engine mounts, stuffed in some more foam between the pillars and changed the weather strips to ensure sound is kept out. It stays out. There’s a bit of irritating tyre noise, but ignore that - and it’s a nice place to be.

The City’s cabin is a lot more aurally engaging. There’s a sense of drama in the Honda that makes it fun. It begs you to downshift, slam on the gas and be naughty. Of course, this isn’t something that will come into play everyday. But, if you are looking to indulge in guilty pleasures, it’s the City that delivers.

Surprise. It’s the Verna. This is slightly surprising, considering the old one flopped about quite a lot. The new Verna rides flat, and is rock steady at speeds you shouldn’t be doing. The rear remains planted too, so it’s now possible to make that weekend trip with the family without anyone having to reach for the paper bag. Even inside the urban jungle, it deals with lunar surfaces we refer to as roads without much fuss.

The City’s suspension isn’t as silent as the Verna’s. And, it isn’t as forgiving either. The stiff setup makes itself felt as you go over those expansion joints on the flyovers, or those improperly made speed-breakers. It does help the car be stable at highway speeds, and flat through corners - but we do wish it yielded a bit more inside the city.

Now, we don’t expect many to go hunting apexes in either of these cars. Push them within their limits, and they deliver enough to keep you engaged. Yes, the Honda’s steering feels more direct - but it’s not a day and night difference. Hyundai is hot on its heels - the chassis feels tight, and it tucks into corners quickly. The steering is precise, and although not chatty, just enough to give you confidence.

Brakes on both are progressive, and predictable. There’s no second guessing involved, and even when you stomp on it - there’s no tail-wagging or drama. On the safety front, both cars get ABS and dual airbags as standard. However, the Verna one-ups the City by offering 6 airbags, compared to just two. The City does get side and curtain airbags in the top-spec ZX grade which unfortunately the petrol manual variant isn't available in.

With the update, the City continues to be the no-nonsense package it always was. If you are looking to be chauffeur-driven or need a big family car, this is the one to pick. No questions asked.

But, if you are willing to sacrifice on rear seat space, the Verna is the more mature car of the two. It's easier to drive, rides better and has more equipment as well. To top it all off, it’s more affordable as well at Rs 11.35 lakh (vs Rs 11.70 lakh). Yes, you could accuse it of lacking that X-factor that the City has in oodles. But, that doesn’t take away from the fact that’s it's a well-built, fuss-free, competent car. So, it’s the Verna that takes the crown in this battle. More importantly, it signals that brand Hyundai has really come of age.