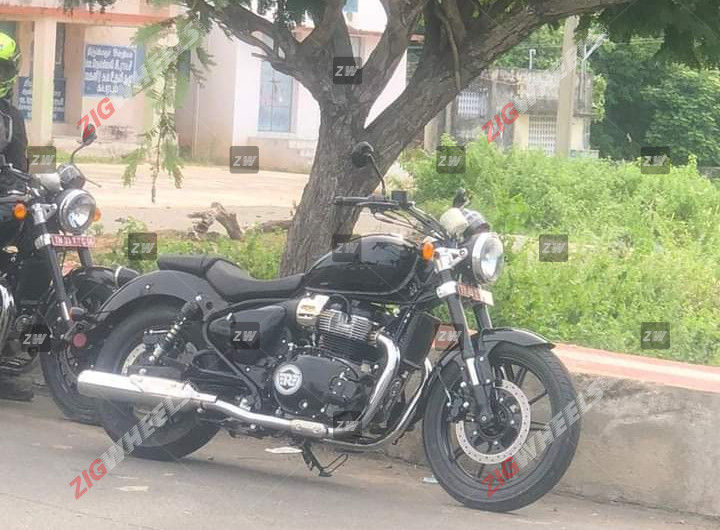 EICMA 2017. The stage where Royal Enfield announced its intention of world domination with the 650 twins. Four years on, at EICMA 2021, we may witness another chapter of the 650cc platform, one that will appeal to Americans highly. Yep, Royal Enfield’s 650cc cruiser could take centre stage at this year’s EICMA.

But while this EICMA would be the opportune moment to reveal the cruiser, its name still remains a mystery.

Now, we have seen two iterations of the cruiser on test. And Royal Enfield has trademarked the names ‘Roadster’ and ‘Shotgun,’ which to be honest are pretty decent names for a cruiser. However, this being the company’s 120th year of existence, it is quite likely that Royal Enfield could bring back another popular name from its rich history, the Super Meteor.

Interesting Fact: ‘Indian’ Royal Enfield Super Meteor 700 Sold In America In The '50s
In its heyday, RE wanted to grab a slice of American pie. Instead of going solo, RE entered into a partnership with The Brockhouse Corporation, which had the license to the legendary Indian Motorcycle name, in the mid-1950s. Along with Floyd Clymer, renowned for Clymer service manuals, Brockhouse badge re-engineered Royal Enfield Super Meteor 700s for the American market. While the bikes were heavily Americanised (16-inch balloon tyres, upright bars, valanced mudguards and what nots), they never quite took off because the Americans found the engine far too small. The association between Brockhouse and RE ceased to exist in 1970 and while a few Enfields were still imported to America by Clymer, his death in the same year ended the chapter altogether.

An important reason why Royal Enfield might stray away from using the Roadster name for one of its cruisers is Harley-Davidson. Harley already has a cruiser called the Roadster on sale across the world and hence, RE wouldn’t be able to sell its own bike with the same name. This is a similar case for when the Thunderbird 350 was sold as the Rumbler 350 (yep, we know that’s not a great name for a bike) in Australia.

To know what exactly the cruisers will be packing, head here to this story.