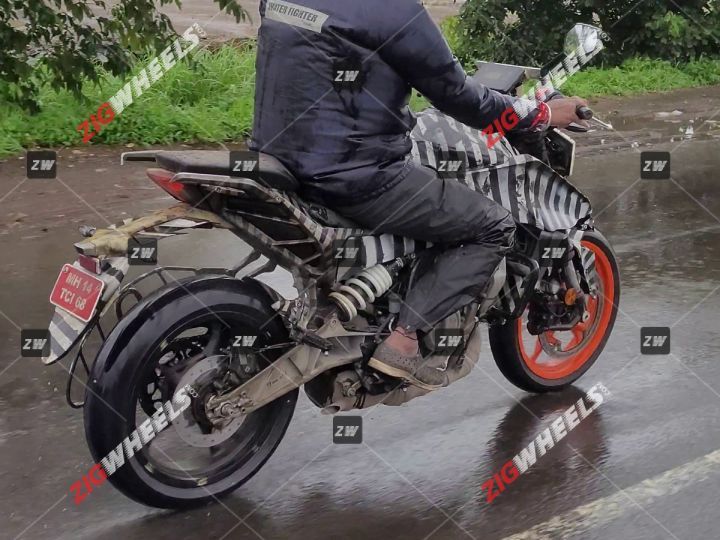 KTM has been working on the next generation of Dukes for a while now and the pre-production road testing phase for the same seems to have begun in India. We have spotted the new 2023 KTM 200 Duke in action on Indian streets and boy, there’s quite a lot to look forward to on the new bike.

To start with, the new 200 Duke will undergo major reconstructive surgery to make sure that it looks sharper and edgier than anything in the market. The tank extensions look larger, the headlight pointier and the tail section sleeker than before.

The mirror stalks are far longer than the currently used ones and look more premium, so do the levers. Even the switchgear seems to have seen a bit of an improvement. The kill switch is sort of similar to what we’ve seen on the BS6 versions of the BMW G 310 R and G 310 GS.

The bike is sporting quite a large console. It could be an updated version of the LCD panel that first made its debut on the 250 Adventure or KTM could be looking to give it a cool colour TFT dash. The latter could pose some challenges when it comes to pricing and also availability of semiconductor chips, which has been causing several disruptions in KTM’s supply chain of late.

The core emphasis on the new gen Dukes is to make them lighter, just like the RCs. So, the frame will be lighter than what it currently is. The subframe is reminiscent of the forged units of the 790 Duke and 890 Duke.

The aluminium swingarm is radically different with an offset-mounted monoshock. While the screengrab from the video is a bit hazy, there seems to be a small silver circle located near the lower mounting point of the monoshock. So, could KTM be giving the 200 Duke rebound adjustability at the rear like it has done with the new RC 390? That’s something which needs to be found out.

Even the 5-spoke wheels are from the new RC 200, which reduce unsprung mass and as a result, the gyroscopic effect is decreased, resulting in sharper handling. Even the new 320mm front rotor will help in weight reduction.

We expect the motor to also undergo a series of tweaks and updates. It might not make more power than what it currently makes, 25PS and 19.3Nm, but the focus in this area would be to make it more refined. KTM has taken great strides in this department with the latest gen RCs, the new RC 390 in particular, and we hope the Dukes also benefit from it.

Also, this very same motor would spawn the smaller 125 Duke. Imagine that bike to skimp on a few features like the adjustable suspension and fancier lighting for India.

With this new platform, KTM intends to shift the Indian buyers’ perspective of its motorcycles from being accessible and value for money products (which it has lost out big time) to premium products that come with a distinct edge over their competition.

Hence, even though the 200 Duke is currently retailing for Rs 1.92 lakh (ex-showroom Delhi), we wouldn’t be surprised if the next-gen bike costs around Rs 2.25 lakh or more. Considering the 200 Duke happens to be KTM’s best-selling product in India, it will be challenging to see how the new bike will fare in times to come.