Comparing the two adventure motorcycles you could buy this year 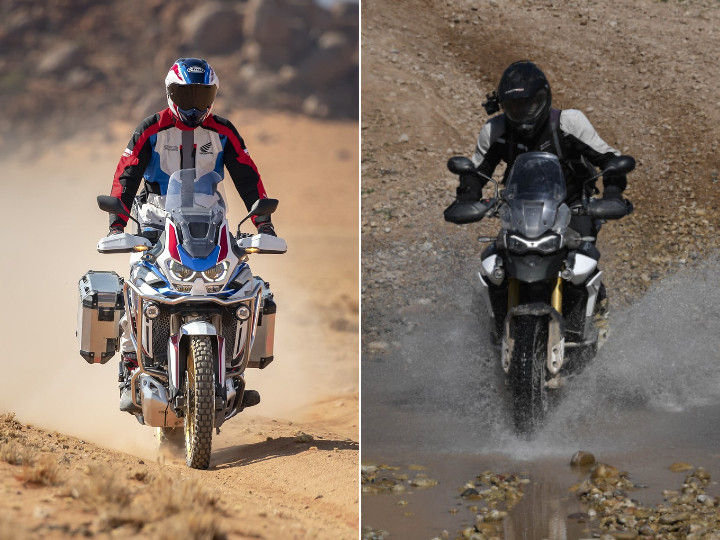 With the launch of the Honda CRF1100L Africa Twin Adventure Sports, the Japanese brand has kick-started a wave of BS6-compliant imported big bikes into the country. Even though it is the only large-capacity ADV available right now, Triumph is not too far behind as the Brit bikemaker will be bringing in the updated Tiger 900 to our shores soon. So, if you are seeking adventure in 2020, which one of these two makes more sense? For this comparison, we have chosen the India-bound Rally Pro variant, which is the top-of-the-line off-road-focused trim.

Honda has managed to crack past the 100PS-mark with the new Africa Twin and we’re hoping the new Tiger will also boast of a triple-digit figure. Sadly, in order to comply with European A2 licensing laws, Triumph had to keep this figure low to be able to fit the restrictor kit on it. The main talking point though remains the massive gulf in torque between the two motors. With nearly 18Nm more of torque on tap and at lower revs, the Africa Twin would have an edge getting out of tricky situations.

The two motorcycles are evenly matched when it comes to the electronic aids on offer. While Triumph is offering a bi-directional quickshifter as standard, the system is missing on the Honda’s manual gearbox version. Thanks to a six-axis IMU, Honda is also offering wheelie control, which is a novelty feature rather than a must-have on an ADV.

The Tiger 900 gains an upper hand in terms of components. Even though both motorcycles run virtually the same suspension units, the ones on the Triumph offer 10mm more wheel travel at both ends. Plus, it gets Brembo’s state-of-the-art Stylema calipers. These top-spec braking units are becoming a common feature on most modern Triumphs. Both motorcycles come fitted with spoke wheels. The only advantage the Africa Twin has is that it runs an 18-incher at the rear wheel, lending it that extra bit of stability while going off-road.

Both these ADVs have quite daunting seat heights, which at their lowest setting is still 850mm. However, both of them have been put on a diet regime and have slimmed down considerably, putting tip-toeing fears to rest. The Africa Twin is a heavier machine than the Tiger.

The new Africa Twin, in its larger Adventure Sports manual gearbox avatar, comes in at a price point which is Rs 1.85 lakh more than the previously sold slimmer DCT version. While we expect it to undercut the range-topping Tiger 900, we do think that the Tiger just might turn out to be a better bet off-road. However, with all the fancy gizmos and a larger fuel tank, the Africa Twin would extend your saddle time by at least a 100km!