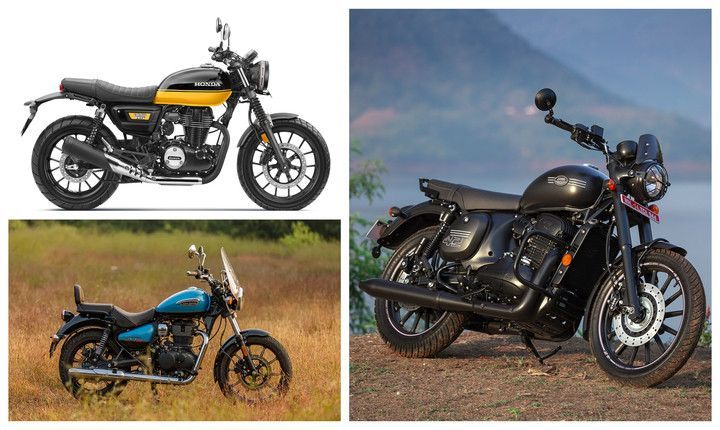 Retro motorcycles find their way to the hearts of the young and the old alike. A genre, once ruled by Royal Enfield has now been witnessing a lot of competition in the past couple of years. Today, Honda launched the CB350RS, a slightly sportier alternative to the H’Ness CB350. Having ridden the Jawa 42 2.1 last week, it would only be fair to see how the Honda stacks up against the Jawa on paper, and of course we couldn’t leave the Royal Enfield Meteor 350, could we?

Despite being the smallest engine, the Forty Two’s motor packs more power than its rivals. Unlike the Honda and the Royal Enfield, the Jawa employs a thoroughly modern, undersquare engine that is tuned to extract more performance. The CB350RS and the Meteor 350’s long-stroke engines, on the other hand, are tuned for better low-end grunt, much like those of classic motorcycles.

The chassis of all three bikes are more or less similar. They employ a very traditional frame and have a basic suspension and brake setup. That said, all the bikes have the safety net of the dual-channel ABS. The RE and Honda use a 19-inch front wheels and a fatter rear tyre for better straight line stability which comes at the price of agility, whereas Jawa’s use of an 18-inch front wheel not only scores on agility, but doesn’t compromise much of stability either.

Complementing the Jawa’s peppy engine is its kerb weight. It is the lightest amongst its competitors, which undoubtedly adds to the bike’s fun quotient. Moreover, the taut wheelbase makes it easier to dive into corners. While the RS’s 800mm high seat is certainly accessible, the 765mm saddle height on the Jawa and RE makes it easier for shorter riders.

The Forty Two feels a little out of its depth here. Though the CB350RS and Meteor 350 have resorted to a more traditional build, they still pack enough modern features. That said, the traction control on the Honda is certainly an overkill. However, confusingly, RS doesn't feature smarphone connectivity and navigation, like the H'Ness does.

The Meteor, on the other hand, offers some modern features but doesn’t stray from its roots; it still uses a halogen headlight and indicators. Thanks to the new Tripper pod, the Meteor is now the first Royal Enfield bike to feature navigation as standard.

The Meteor, on the other hand, offers some modern features, but doesn’t stray far from its roots, and uses halogen headlight and indicators. Thanks to the new Tripper pod, the Meteor became the first Royal Enfield bike to feature navigation as standard.

When it comes to pricing, the Jawa 42 2.1 is the cheapest amongst its competitors. However, it lacks the features that the Honda CB350RS and the Royal Enfield Meteor 350 offer. In fact, the Meteor 350’s base mode-- Fireball is Rs 11,000 cheaper than the CB350RS and Rs 8,000 than the Jawa 42, yet offers decent equipment and features. So, unless you are a Jawa fanatic, the 42 2.1 wouldn’t be a great option. For people looking for quality and reliability, the Honda CB350RS would be the right pick.