How Does The Highness Stack Up Against The Upcoming Meteor 350?

DISCLAIMER: The specs of the upcoming RE motorcycle are from the leaked documents 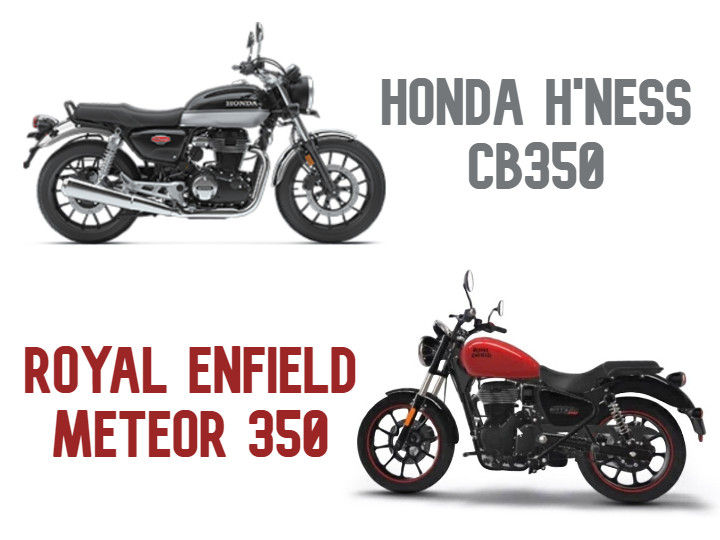 Hold your horses. Pause and breathe. Yes, we know Royal Enfield hasn’t released any specifications about the Meteor 350 yet. Heck, as far as the company is concerned, the cruiser doesn’t exist either. But, the internet being the internet is gaga with information about the Meteor 350. In these past couple of weeks though, the news of the arrival of a new Honda has caused quite a stir. And after the launch of the bike yesterday, the Honda H’ness CB350 has clearly thrown a spanner in the works for Royal Enfield. Given that these two bikes will go head to head at some point in time, we wondered how these two would fare against one another, at least with the limited info that we have on the Meteor 350. Here’s how it goes:

Despite both bikes running a long stroke configuration, our guess is that the Honda motor has a slightly longer stroke. It makes its peak power and torque figures at slightly lower revs in comparison to the RE motor. The CB350 packs more torque and hence should be quicker off the line and get up to city cruising speeds sooner than the Meteor.

If rumours are to be believed, then the Meteor 350 might bear a six-speed gearbox. One cog more will definitely help the RE motorcycle sustain highway speeds with less stress on the motor. Less stress means better fuel efficiency and that ultimately leads to more miles on a single tankful of gas.

The two bikes are equally matched in terms of hardware on board. The differences in braking hardware is quite a small one and dual-channel ABS would be there on both bikes as standard. The only stark difference here remains the wheel setup. Both motorcycles will run with the same large 19-inch front wheel but it is the selection at the rear which makes it more interesting. Despite running a chunkier section tyre, the smaller 17-inch rear wheel should make the Meteor 350 a better handler. The overall tyre diameter is slightly smaller than the CB350’s and thus, should be easier to steer through obstacles. The Honda would be more stable in theory, both on the highway as well as in the corners.

There are hardly any dimensions leaked regarding the Meteor 350 aside from its fuel tank capacity, which is identical to the CB350. For a fleeting moment, if we were to assume that the Meteor’s dimensions would be identical to the Thunderbird 350X, the bike which it replaces, then results would suggest that the Honda has a longer wheelbase, weighs a bit less and has a narrower handlebar. But more on this once we get more concrete data.

Royal Enfield was about to stun us by offering Bluetooth smartphone connectivity, turn-by-turn navigation and a lot more features for the first time in the segment. But Honda pipped them to it with the H’ness CB350. While the aforementioned features are only going to be present on the DLX Pro model of the Honda, RE will offer it on all trims of the Meteor as standard.

There are two areas where Royal Enfield continues to lag behind the Honda. First, LEDs. You will only get a LED headlight on the Meteor while even the turn indicators and tail light on the CB350 uses LED tech. Secondly, and do not expect anyone else to offer this in the segment, traction control. Yes, the CB350 gets traction control, or as Honda likes to call it Honda Selectable Torque Control. You would question the need of this riding aid on a 21PS, 30Nm motorcycle but one can never be too safe, right?

(all prices ex-showroom Delhi)
Ultimately, it boils down to the money. Now Honda has also been quite shy in revealing the actual price of the H’ness CB350, saying it will be around Rs 1.90 lakh. And then there’s Royal Enfield, who has had its entire plans disrupted due to COVID-19, thus putting off the launch of the Meteor until things get smoother. Then, which one emerges the winner? Maybe we should have a better picture come the end of the year.