How have improvements to the new RC 390 improved its daily riding capabilities? 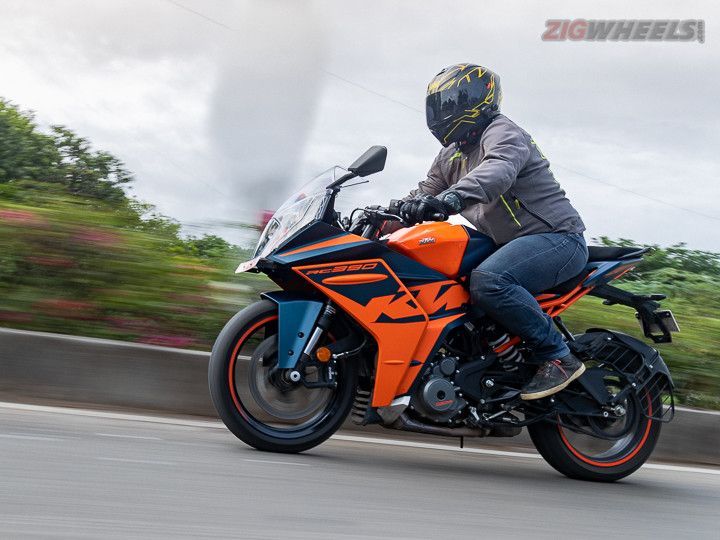 The new KTM RC 390 is a gripping motorcycle. It had me hooked after our first date at the Bajaj test track. However, there were still a few doubts about how well it could perform in the real world. After all, that was the old RC 390’s Achilles heel, making buyers shy away from using it as a daily runner. So, have the changes to make the new RC 390 more urban-friendly paid off?

The RC series, especially the RC 390, was notoriously famous for being short-tempered. The 390 would cook up quite a fuss in bumper to bumper traffic, sending engine temperature through the roof and forcing the rider to make a stop. To address this issue, KTM opted for the curved radiator from the 390 Adventure and threw in one more fan.

The result is that the motor now runs far cooler. During our city fuel runs, our fuel tester claimed that while the radiator fans did kick in, the temperature bar rarely shot up over the halfway mark. Agreed, ambient air temperature during our test runs was on the lower side, but the root cause of the issue was the old motor’s reluctance to commute effortlessly in higher gears, which has been solved now.

It is shockingly easy to ride the RC 390 at city speeds in third or fourth gear without so much as a whine. The motor has a strong pull from 4000rpm onward and really comes into its zone post 6000rpm.

Plus, with the new vent design, hot air is diverted away from the rider’s legs. It isn’t discomforting any more, allowing the rider to keep their cool even when the surroundings are chaotic.

Like we mentioned in our first ride track review, the gains with the new rider’s triangle make it a joyful riding experience. The same carries forward for commuting as well. You don’t have to reach as much to get to the bars, thus relieving you off any back or wrist aches. The seat is well cushioned and the grippy Alcantara-like seat texture is a neat touch.

Finding the sweet riding spot isn’t too difficult as you aren’t really locked into the seat. When braking, the flatter seat profile doesn’t push you into the tank like it used to on the older bike. Plus, the flatter tank recesses help out as well, making sure you can lock your knees firmly into the panels. So overall, this is quite a nice setup for the road, something that did not frustrate me much on daily commutes.

With more suspension travel at both ends and revised components, the RC 390 is better equipped to take on any road imperfection. Also, with the way you are seated, relieving a little load off the front, putting a bit more weight on the rear, the suspension working range has been improved. The front and the rear don’t feel quite as out of sync as they did on the older RC. The ride is noticeably flatter with none of the jarring sensations experienced over rumble strips or broken stretches of tarmac.

Another bit that is improving the city riding experience is the electronics package. On dry concrete roads, the traction control barely intervened. ABS intervention was predictable. There were no heart in mouth moments. Sadly, the quickshifter needs improvement. Upshifts are glitchy, and not quite responsive most times. Downshifts are breezy though.

The older RC had that race cowl shaped pillion seat, which looked beautiful. And well, that’s all it was good for, not when you have a dear one sitting behind you. With this new flatter split seat setup, KTM hopes things will improve.

For starters, it still requires a bit of effort to hop on to, as it still is on the taller side. However, once your pillion is perched onto the seat, there will not be much complaints from their side. It is a nice and upright posture, good enough for urban commutes. Even this seat is well padded and the seat cover carries the same texture as the rider’s. And this time around, the pillion has something physical to grab on to and not trouble the rider.

The changes that KTM has made has had a positive impact on the new RC 390’s commuting capabilities. It is no longer a frustrating experience while riding at 40kmph, or when having a pillion on-board. It is well-mannered and quite mature, something that we cannot believe we are saying about a KTM. However, don’t mistake it for numb or sanitised, the RC 390 can turn the craziness in a flash. And for the fun bits, it wouldn’t be right for us to have all the fun alone. We will be pitting it against its chief rival, the TVS Apache RR 310, soon and go touring with both of them. Now that’s going to be a hot battle.