Here’s What Ducati India Has In Store For 2021 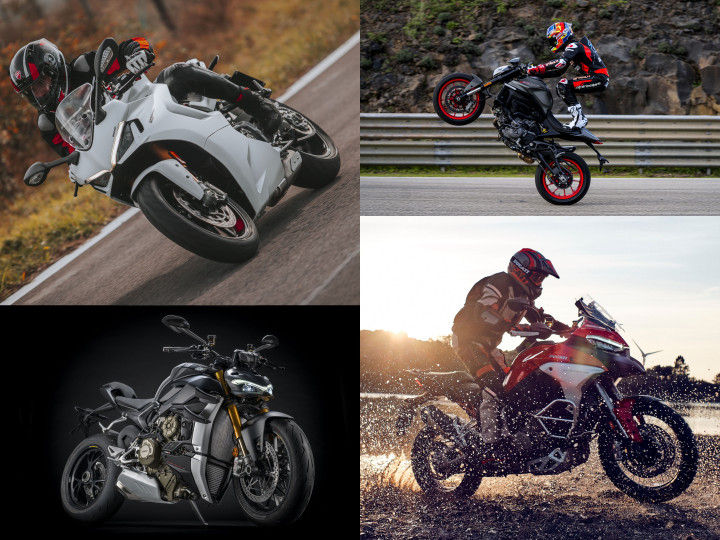 After going through nearly the entirety of 2020, barring the final couple of months, with almost no activity, Ducati is looking to make the most of 2021. The Italian brand did bring the Panigale V2, Scrambler 1100 and the Multistrada 950S to our shores in 2020 but for 2021, there are going to be at least six, if not more, new launches. Here’s what’s in store:

Multistrada V4
Expected Price - Rs 20 lakh onwards
Expected Launch - Q2
Ducati’s most ambitious project yet, the Multistrada V4 takes adventure touring to a whole new level. Powered by the 1,158cc Granturismo V4 engine, the bike is the most powerful adventure tourer yet. It isn’t a fire breathing dragon that pushes out 200PS like its Panigale and Streetfighter cousins, remaining content with 170PS only. It is quite torquey though, with 125Nm on tap. Expect this to be one of the headlining motorcycles for Ducati in 2021.

Streetfighter V4
Expected Price - Rs 18 lakh
Expected Launch - Q1
It has been over a year since Ducati unleashed the Streetfighter V4 globally. Sadly, its non-EU5 compliance meant it couldn’t be brought to India until the engine got the necessary updates. Gladly, the bike hasn’t lost out on any performance. Its 1,103cc Desmosedici Stradale V4 mill produces 208PS and 123Nm, making it the most powerful naked motorcycle when it goes on sale here.

Scrambler BS6
Expected Price - Rs 8 lakh - Rs 11 lakh
Expected Launch - Q1
While the Panigales and Multistradas remain the star attraction, the Scrambler range is the one that remains accessible for a lot of Ducatistis. The standard Icon and Desert Sled trims will be supplemented by a new variant called Nightshift, which is sort of an amalgamation of the old Cafe Racer and Full Throttle variants. Prices of certain trims had been leaked online via the configurator but we are still waiting for an official confirmation from Ducati.

Monster
Expected Price - Rs 11 lakh
Expected Launch - Q3
This bike has caused a lot of chaos in the online community due to its polarising design. While it is natural for Ducati to make its Monster lighter and more fiendish, but the way the new 950 looks, it is definitely not making enthusiasts happy. There’s no exposed tubular steel trellis frame, no chunky fuel tank, and the headlight isn’t exactly round. It is significantly lighter and has more power on tap now, thanks to the 937cc L-twin engine. Let’s hope this new direction adopted for the bike pays off and the Monster once again becomes one of the strong forces to be reckoned with in the middleweight naked space.

SuperSport 950
Expected Price - Rs 15 lakh
Expected Launch - Q2
Ducati will offer its 937cc engine in three distinct flavours in 2021. The Multistrada 950S plays the role of the adventure tourer while the Monster will look to capture the attention of the naked hooligan rider. The SuperSport 950 though, will offer a sort of a neat balance between the two, all wrapped up in a new Panigale-inspired design. The versatile full-faired Ducati has been one of the most enjoyable Ducatis in recent times, certainly one that can be enjoyed without worrying about backaches and heartaches induced when riding over our not-so-pristine roads. Ducati claims it can also keep you happy around a race track. It certainly won’t be as sharp as a Panigale V2 but it should be good nevertheless.

Panigale V4
Expected Price - Rs 22 lakh onwards
Expected Launch - Q1
Last but not the least, the superstar, the excellence, the pinnacle of Ducati sports bikes, the Panigale V4 will once again reappear on to the Indian motorcycling scene. Such was the popularity of the bike, that a handful of BS4 units were left unsold. Now, with winglets standard on all variants, the sportbike will add an extra dimension to your track day experience. There’s also a new hardcore SP version, of which a couple of units could be brought to the country. Find out what’s special about the SP in our story here.

Other Possible Bike Launches
Ducati’s cruiser lineup has also been updated to meet the BS6/EU5 norms. The XDiavel and the Diavel 1260 each get special editions and Ducati India would want a few takers for the said editions. What remains a mystery is the fate of models such as the Multistrada 1260 and the Hypermotard 950. Will these models be axed? Will they get their updates over the course of 2021? We will have to wait and watch. But Ducati is certainly looking to paint 2021 red with its models.