The bike is up for sale with street-legal parts like a BMW exhaust system, bolt-on license plate, turn indicators and tail light setup 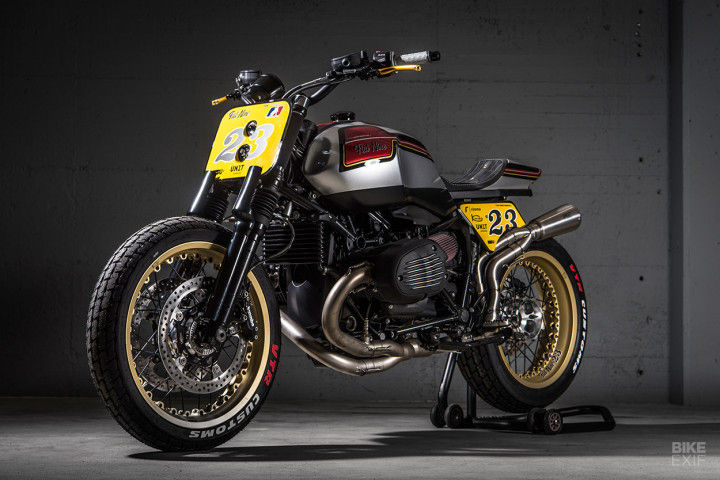 It’s not a rare sight to have a custom shop take the BMW R nineT, tear it apart and pimp it into something extremely special. And why wouldn’t they? The bike was designed to be versatile with many faces -- from a roadster to a cafe racer to a scrambler.

The one area BMW hadn’t explored so far is flat tracking. Well, that’s rectified today with this concept envisioned by VTR Customs, the custom side of BMW dealer Stucki2Rad.

The initial idea was to have all their contacts work on a version of the flat tracker. Unfortunately, it didn’t pan out the way shop boss Dani Weidmann expected. So the folks from VTR Customs decided to run solo and build their own flat tracker conversion kit. But the idea was soon scrapped once the production and investment costs were laid down in front of them. So the custom shop finalised on a one-off flat tracker as per their whims and fancies. Most of the team came from motocross and supermoto racing backgrounds so these lads knew exactly what they were doing. But with no financial backing, the bike had to be sellable in order to earn a paycheck.

Since there were budget constraints, VTR Customs were forced to reuse the fuel tank and the original 17-inch wheels. But it all worked out. Well, almost. To start things off, the boys stripped away the right-side air intake for a cleaner look since the engine was now fed air via K&N filters.

The modular subframe on the R nineT was also reworked with a flat track tail section. The seat pad design was entrusted to Yves Knobel who knocked it out of the park with some intricate stitching.

Just like a typical flat tracker, the bike featured a couple of aluminium number boards with a pair of projector headlamps up front for some decent illumination. Sourced parts included a pair of flat track fork guards, a Monza gas cap, Magura handlebars, and some beautiful Rizoma footpegs, brake and clutch levers. A set of valve covers were picked right off BMW’s own aftermarket catalogue finished in black. The rest of the mechanical components were also sprayed black to reduce the visual weight of the bike.

Since the concept of flat tracking originated from the USA, VRT customs thought it’d be best to pay homage by spraying the bike with different colours in typical American fashion -- candy colours, yellow number plates and vintage style start numbers. The stock 19-front and 17-inch rear wheels were repainted in gold and the bike was lowered slightly to correct its stance.

The finished product garnered plenty of attention at the Swiss Moto Show. Everything came together really well, but the 17-inch rear wheel was a bit of a mismatch. Thankfully, it was eventually swapped out for a 19F/18R combo wrapped in street-legal Dunlop DT3 tires. And the end result is nothing short of a masterpiece -- a stunning well-proportioned bike.

As mentioned earlier, the bike’s up for sale with street-legal parts like a BMW exhaust system, bolt-on license plate, turn indicators and tail-light setup. Heck, if I had the money, I’d surely get one. Wouldn’t you?