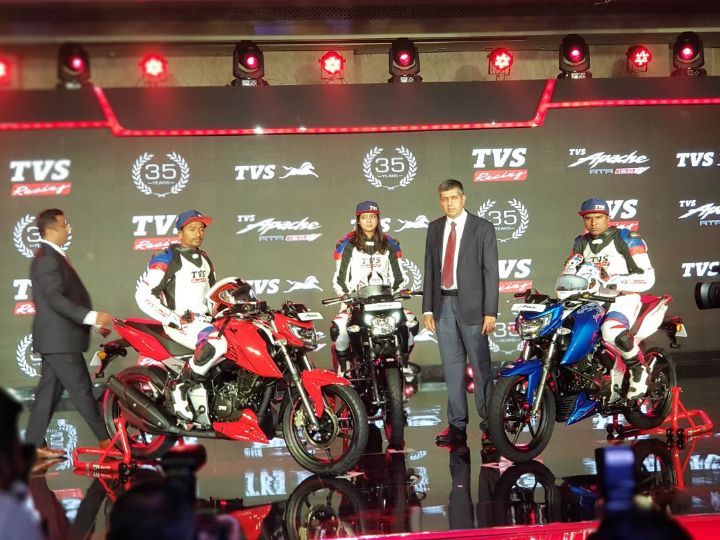 After many spy shots and speculations, TVS has officially launched the 2018 Apache RTR 160. Just like the TVS Apache RTR 200 4V, the company will offer the RTR 160 in two different variants - EFI and Carburettor. The Carb single disc variant is priced at Rs 81,490, while the Carb dual disc variant is priced at Rs 84,490. The EFI variant has received a price tag of Rs 89,990. (all ex-showroom Delhi). The Hosur-based company has given the motorcycle one of its most comprehensive updates in a long while.

In terms of design, the RTR 160 ditches its decade-old design and draws inspiration from the older sibling, the Apache RTR 200 4V. This can be seen in the redesigned headlamp, instrument cluster, fuel tank, side panels and even the LED tail light. However, the RTR 160 retains its single-saddle unit and doesn't opt for the split seats that can be seen on the RTR 200 4V.

Just like the Apache RTR 200 4V, the RTR 160 4V also comes in a fuel-injected version and a carbureted one. Its 159.7cc single-cylinder, 4-valve engine produces 16.8PS of power at 8000rpm in the Fi variant and 16.4PS of power in the Carb variant. Torque figures remain identical at 14.8Nm at 6500rpm on both the variants. In comparison, this is a bump of 1.4PS of power and 1.7Nm of torque from the older model. TVS has also equipped the motorcycle with oil-cooling for a better heat management system.

The Apache RTR 160 now uses the split cradle frame from the RTR 200. It is suspended on the same telescopic forks as before but the monoshock unit from the 200 has replaced the twin shock absorbers. Braking duties are handled by front 270mm and rear 200mm petal discs on the Fi variant while the Carb variant gets a rear 130mm drum unit. ABS has been given a miss here.

The Apache RTR 160 rivals the newly launched Honda X-Blade, priced at Rs 78,500, and the Hero Xtreme Sport, which retails for Rs 78,226 (ex-showroom Delhi). To know our thoughts about the bike, stay tuned for our detailed first ride review!