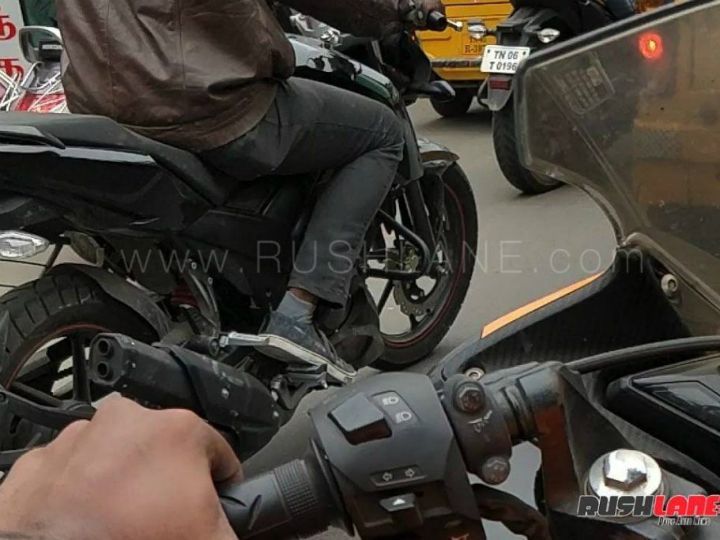 The 160cc entry-level sportbike space is currently one of the hottest segment in India. This highly-competitive segment has major bike makers vying for a piece of the pie and offering products with features and technology seen on larger bikes. One example is the latest entrant in the 160cc class, the Bajaj Pulsar NS160, which borrows heavily from the larger NS200.
Hosur-based TVS can be called the pioneers of this segment with their RTR 160 being one of the first motorcycles to be launched in the country. The RTR, though, has been around for a while and feels quite dated when compared to the newer crop of bikes.
It seems like TVS has been working hard on updating the RTR 160 as a production-ready version of the motorcycle was spotted testing in Tamil Nadu. From the spy pictures, it looks like the RTR 160 will now draw inspiration from it’s larger cousin, the RTR 200. A test mule was earlier spotted in July and since then it has received some more updates.
Like the Bajaj Pulsar NS 160 that borrows heavily from the NS200, the RTR 160 too will use the bigger Apache’s frame and suspension. The new bike uses the bodywork and the exhaust canister from the RTR 200. The seat, however, continues to be a single piece unit unlike the split unit seen on the RTR 200. The current RTR 160 uses a twin gas-charged damper at the rear while the new one seems to borrow the gas-charged monoshock unit from the RTR 200. While the rear suspension gets an upgrade, we expect the RTR 160 to get the 37mm front forks from the RTR 200 as well.  The new RTR 160 might feature the fully-digital instrument console from the RTR 200 as well. Other bikes in the segment that feature fully-digital instrument console include the Suzuki Gixxer and the Yamaha FZ16 v2.0.

Currently both the RTR 200 and the RTR 160 feature 270mm front petal disc brakes. While the RTR 200 uses a 240mm disc brake at the rear, the RTR 160 gets a smaller 200mm unit. For the updated RTR 160, TVS could either stick with this setup or switch to the larger 240mm rear unit for better braking.
The RTR 160 comes with a 159.7cc, single-cylinder engine that churns out 15.4PS of power and 13.1Nm of torque. We expect the new engine to be reworked for better refinement and performance to help TVS reclaim this hotly contested segment.
The Apache 160 currently retails for  Rs 76,865 (ex-showroom, Delhi) and competes against the likes of the Suzuki Gixxer, the Honda CB Hornet 160R, Bajaj Pulsar 160 NS and Yamaha FZ16 v2.0.
While this is the second test mule of the RTR 160 to be spotted, the RTR 180 hasn’t been spotted yet. There is a possibility that TVS might phase out the RTR 180 in order to focus on the RTR 160 and RTR 200. Or they might come up with a new RTR 180 featuring similar updates as the RTR 160. That is something we will have to wait and watch.