Based on what we know so far, here’s what we can expect from the BS6-compliant version of TVS’ flagship motorcycle 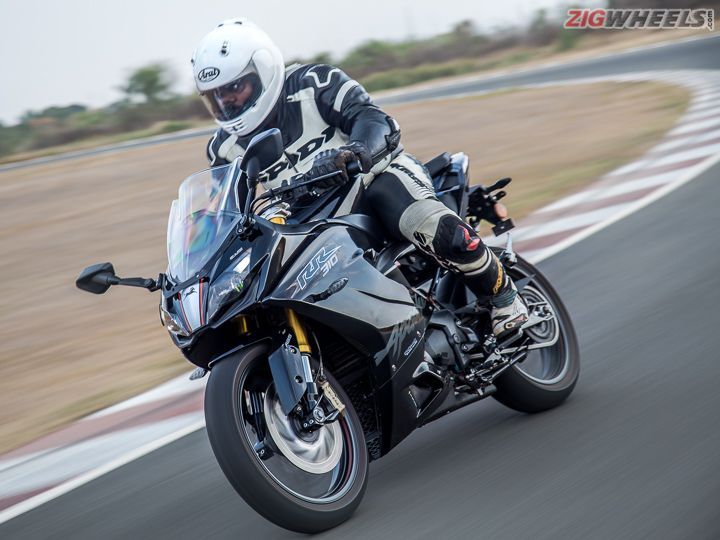 The BS6-compliant version of the TVS Apache RR 310 was spotted testing recently, and now the motorcycle has been spied at the Madras Motor Race Track during a commercial shoot. Images from these two instances reveal some juicy details about the motorcycle. Here’s what we know so far and what we can expect from the upcoming motorcycle:

Gets geek-friendly with more intuitive controls:

The BS6-compliant TVS Apache RR 310 features a new instrument cluster. While it retains the portrait layout, it is now a full-colour TFT unit as opposed to the LCD console in the current-generation motorcycle. The tachometer readout is a lot more legible than before. The console displays all the necessary information like range, speed, trip meter and odometer details. Interestingly, it now also shows the coolant temperature in Celcius for even better accuracy.

While the current-generation motorcycle is also equally info-laden, navigating through all the functions is a bit cumbersome with just two buttons on the console. So in the BS6 version, TVS has provided directional buttons that should help in navigating through the menus a whole lot easier. Considering the Apache RTR 200 4V already has smartphone connectivity, we believe the BS6 Apache RR 310 will also have this feature. Expect functions like caller ID, lean angle display, and navigation assist to be present in the BS6 bike.

Will it come with multiple rider modes?

The spy shot shows ‘Urban’ mentioned in the instrument cluster. That said, a sub-40PS motorcycle doesn’t exactly command the need for multiple rider modes, so we believe it is just for the display layout. Perhaps in urban modes, the instrument cluster could show trip-related information whereas, in sport or track mode, it could switch to showing performance-oriented data like lap times, lean angles, recorded acceleration, and top speed.

Moreover, if TVS had to provide multiple rider modes, then it will have to use a ride-by-wire system instead of a cable-operated throttle. The ECU will also have to be tweaked accordingly and all these drive up the cost considerably.

Likely to witness a change in output figures:

The BS6 test bike was spotted next to the current-generation model, which leads us to believe that TVS might be benchmarking the new version against the old one. That means there might be changes in the output figures.

At 20.5PS, the BS6-compliant TVS Apache RTR 200’s power figure was unchanged but its peak torque went down from 18.1 to 16.8Nm. Similarly, the BS6 Apache RR 310 might also witness a slight drop in torque in favour of cleaner emissions. But more importantly, despite the drop in torque, the BS6 RTR 200 does not feel anaemic at all, and we expect the RR 310 to also retain its lively feel in terms of real-world performance. After all, it isn’t just the spec-sheet that maketh a motorcycle!

For reference, the 312.2cc single-cylinder liquid-cooled fuel-injected motor produces 34PS at 9700rpm and 27.3Nm at 7700rpm. It is mated to a 6-speed transmission with slipper clutch.

What about the underpinnings?

TVS has already equipped its flagship motorcycle with top-notch underpinnings like a trellis frame, cartridge-type inverted front fork and a rear monoshock tuned by KYB. It also gets petal discs on both ends with a radial caliper up front and standard dual-channel ABS with rear-wheel lift-off protection. TVS is likely to carry over all these features in the BS6-compliant model.

Interestingly, the BS6 bike spied at the shoot featured different tyres compared to the current-generation bike’s Michelin Pilot Street radial rubber. The tyres in the BS6 bike are likely to be TVS’ own radial units and it looks like the Hosur-based bikemaker wants to push its own brand of tyres instead of the Michelin.

How much is it going to cost and when can you buy one?

The aforementioned changes are likely to command a considerable premium. The BS6 TVS Apache RR 310 could be priced around Rs 15,000 more than the current-generation model. The BS4-compliant version currently retails at Rs 2,28,000 (ex-showroom Delhi). As far as the launch timeline is concerned, expect the bike to enter the market in January 2020. Its primary rival will be the KTM RC 390, which will also be updated to comply with BS6-emission norms soon.