An able, awesome all-rounder, but it was missing a little something. Has the Apache RR310 found a splash of magic in 2020? 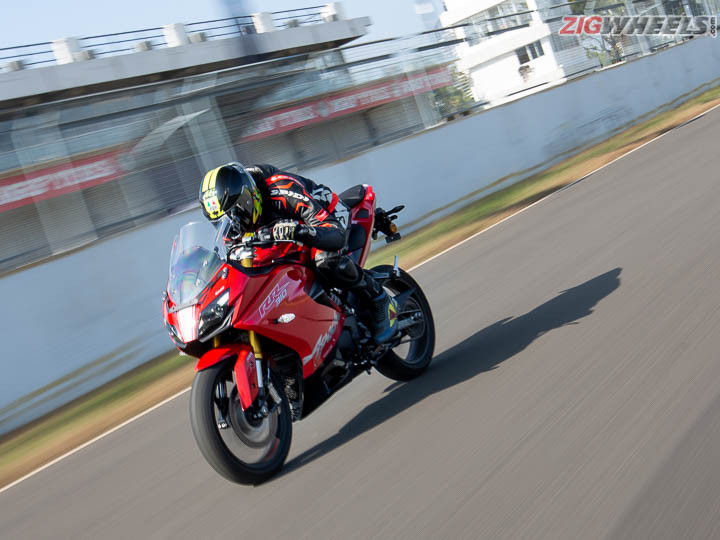 Of all the Indian manufacturers, TVS is the only one that can genuinely boast of some illustrious racing heritage. Sure, Bajaj likes to call its Pulsar range sporty, and Hero wants us to think that its fully-faired Xtreme 200S is a pukka sportsbike. But TVS is a manufacturer that develops its bikes at the racetrack and then slaps on some lights and mirrors before shipping them off to showrooms. Well, almost. We loved the early RTRs for their unapologetic attitude towards performance, and the 4V versions then brought in a touch of maturity and usability without giving up the fun factor.

With the first-gen Apache RR310, TVS embarked on its most ambitious journey ever - to deliver a fully-faired sportsbike to take on the likes of the KTM RC 390. Its collaboration with the Bavarian behemoth, BMW, gave it the ammunition it needed, but also proved to be a bit of a curse. The well-balanced suspension setup and sporty trellis frame gave it the appropriate hardware for the job, as did the 312cc DOHC single-cylinder motor. But what TVS hadn’t anticipated were the (nearly) crippling vibrations and unrefined nature of the motor, especially in the mid-range, coupled with a rather harsh exhaust note. Very un-TVS, if you ask us.

TVS has been made aware of this issue, and for 2020, the bike has received its most comprehensive update yet. This gives the brand the perfect opportunity to inject a little more, well, TVS, into the motorcycle. So, has it finally plugged the chinks in its armour and become the perfect all-rounder? And equally importantly, is it finally less Munich and more Madras?

The boffins at Hosur have gone to great lengths to make the engine seem smoother - work has been done on the mounting points and some changes have been made to engine internals as well, but the lion’s share of it has gone into electronics. Equipped with ride-by-wire for the first time, the RR can now also boast of 4 ride modes - Rain, Urban, Sport and Track. The first two see engine output limited to 28.5PS and 25Nm, while the latter two give you the full 34PS and 27.3Nm - unchanged from before. The logic behind the first two modes is to give you a healthier dose of torque at lower RPMs, rather than focusing on peak output. This renders the engine more usable, meaning the rider doesn’t have to work the motor as hard.

Since the good folks at TVS had let us loose at the Madras Motor Race Track, I spent most of my time in Track mode, where throttle response feels crisp and immediate. The motor pulls cleanly throughout its rev range, with the top-end feeling a little stronger than before. Very commendable, considering that it’s now also BS6-compliant. At the opposite end of the rev range, it’ll pull from 30kmph in 6th gear without protest, so the reverse-inclined motor has retained its tractable, usable nature.

What vibes? The irritating tremble felt between 6000-8000rpm has now all but disappeared, being reduced to only a mild buzz from the seat. The handlebars and footpegs seem well isolated, and this new RR will be a lot better suited to highway touring than its predecessor. The exhaust note has also improved, now allowing you to ride along without the fear that something inside the engine has come apart.

Sport mode sees the engine in the same state as Track mode, but with ABS configured to kick in a lot earlier, enhancing safety on the street. Urban gets the same ABS mode as Sport, but with reduced engine output, and Rain gives you lower engine output and an ABS mode that kicks in very early, aiding safety in the wet. Each mode throws up its own unique theme on the fancy new 5-inch TFT colour screen, and there are different day and night colour formats within each mode’s theme as well.

Cycling through the modes can be done on the fly via navigation buttons on the left switch cluster, which TVS is now calling a ‘control cube’. The display also gets Bluetooth connectivity which allows you to hook up your phone and manage music playback, accept and reject phone calls and get turn-by-turn navigation up on the screen. This being a performance-oriented motorcycle, you can also check out things like G-forces, acceleration times and lap times. Post-ride analytics and statistics are also available, which we’ll explore in depth during out full road test coming soon. The display itself is bright and clear, the data is well laid out and easy to read on the go. It also looks and feels quite premium, greatly adding to the perceived value of the motorcycle.

We quite liked the Glide Through Technology (GTT) on the recently-updated RTR 4Vs, and the system works well here too. It’s perhaps even more useful here, with the RR’s slightly leaned-forward riding posture. Urban mode sees GTT active for all 6 gears, with the bike doing 35kmph in 6th with zero throttle input.

Friendly. That was the first word that came to my mind upon re-entering pitlane after my first session on board. The Apache’s neutral handling makes it equally enjoyable for newbies and experts alike. But the Apache was always a sweet handler right from day one. What’s new now, though, are the tyres. TVS claims that this is the first motorcycle in the world to come fitted with Michelin Road 5 tyres straight from the factory. And boy, are we glad. The dual-compound construction gives you extra grip on the shoulders while ensuring durability of the central portion. These also have a W speed rating, so all the extra adhesion on offer means that one can now make the most of the sharp chassis. The bike tips in quickly but not unnervingly, and minimal handlebar effort is required. Once leaned over, stability and confidence are available in spades, making this a great motorcycle for beginners, and the direct feeling between the throttle and the rear tyre means corner exits are strong too.

Which means that you’ll be arriving at the next corner quite a lot quicker than before. Meaning that you have to get on the brakes harder than before. Stopping hardware remains unchanged, so while there is adequate anchorage on offer, there isn’t a whole lot of feel at the lever, and the bite isn’t sharp or immediate. But what does make a difference is the Track ABS mode. While the older RR’s lone ABS mode would interfere quite early on, now you can brake hard and deep into corners without having to worry about the system kicking in prematurely.

It may have had a few niggles here and there, but looks certainly wasn’t one of them. The RR is quite possibly one of the most attractive motorcycles to be built outside Bologna, even if some of its inspiration seems to have come from there. Thankfully, not much has changed on this front, and the only minor changes are for the better. You still get the angry, intentful fascia with the bi-LED twin projector headlights up front, and the sculpted fairing full of gills and vents. What is new, is the Titanium Black colour scheme. The variation offered by the matte grey and gloss black body panels looks fantastic, and these darker colours contrast very well with the bright red trellis frame. The tasteful red inserts on the body panels also go a long way in adding some flair to the design.

It’s quite obvious that this is no ordinary BS6 update. TVS has gone a lot further than just slapping on an extra catalytic converter and plugging in some new engine maps - they’ve used this opportunity to really sort out the RR’s Achilles heel(s). And we’re happy to report that their efforts have paid off quite handsomely. It retains all of its positives while addressing nearly all of its flaws. The smoother nature of the motor now makes it a better all-rounder, while the stickier rubber and racier throttle make it even more exciting on the track. The swanky new display isn’t just a brochure-extender either, it adds functionality and convenience while also upping the premiumness quotient.

As can only be expected, prices have gone up. The 2020 TVS Apache RR310 demands 2,40,000 of your hard-earned rupees, which makes it a mere Rs 12,000 more expensive than before. Quite a bargain, when you consider the updates on offer. While the hike might be rather reasonable, it does still put it dangerously close to the KTM RC 390, which now sells for Rs 2.48 lakh in its BS6 guise. But you know what? For the first time, I think the RR might actually be in with a shot at winning this dogfight. There’s only one way to find out, so stay tuned for a full-blown comparison TVS Apache RR 310 BS6 Price.