Triumph Teases Scrambler 1200 Ahead Of Launch 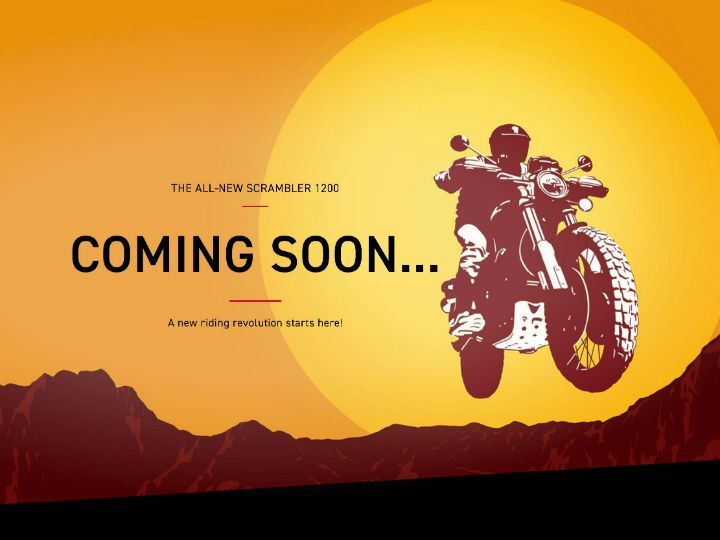 Apparently, Triumph is all set to showcase its new, heavyweight Scrambler model overseas. No wait, we already spoke about this, didn’t we? Actually, that was Triumph teasing us with spy shots and what not. But in their defence, it wasn't official. You can read all about it here.

Anyway, now, the British manufacturer has officially teased the bike in a 11-second video. Out of which two seconds is all you get to drool over the bike. For Pete’s sake, enough with the teasing already!

The big Scrambler will join Triumph’s heritage motorcycle lineup and will be christened the “Triumph Scrambler 1200” (innovative). We’ve actually learned a fair bit about the bike over the past couple of months, and here’s what you can expect. It’s said to be a fully fledged dual-purpose bike, which will most likely get Triumph’s high torque 1200cc parallel-twin engine, pumping out a good 80PS of power and 77Nm of torque.

As seen previously, there will be two versions of the Scrambler 1200, one with cast wheels and conventional rubber, obviously the road-going variant; while the other will come with sporty spoked wheels and knobby tyres, of course for off-road duties. Moreover, we can also expect some electronic wizardry from Triumph to give it the competitive edge it needs over its main rival, the Scrambler Desert Sled. The bike will also employ long-travel suspension.

As mentioned earlier, Triumph’s Scrambler 1200 will go toe to toe against Ducati’s Scrambler Desert Sled, which is also due to receive a 1100cc upgrade later this year. It’s safe to say that the British manufacturer took its own sweet time to iron out any imperfections and build a bike that will give the Desert Sled a run for its money.

The bike is due to show face overseas sometime in October, and we might even see a worldwide launch at EICMA 2018. That begs the question though: Does a 1200cc Scrambler really make sense? We’ll leave it to you to decide.