Could the Ducati Scrambler Desert Sled be the Scrambler we’ve always wanted? And with a premium of Rs 2.0 lakh over the Icon, is it worth it? 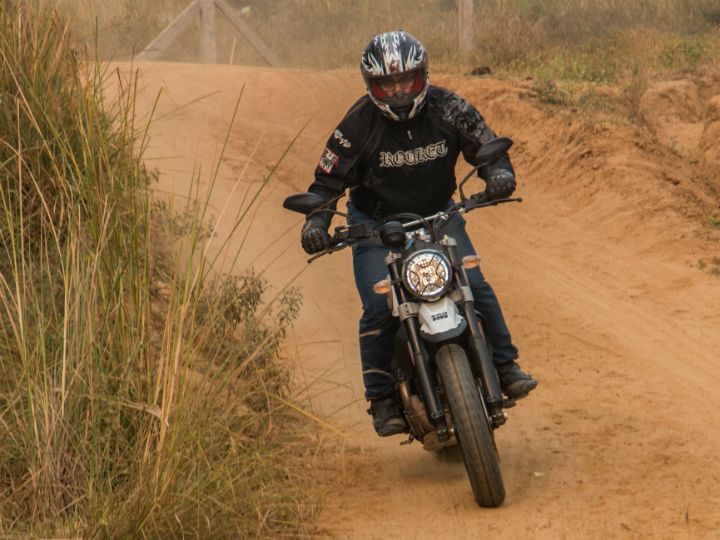 Scramblers were once considered the rebels of the motorcycling world. Road going motorcycles stripped of all comfort, retrofitted with off-road tyres, a high mounted exhaust, minimal bodywork and built for the purpose of racing from point A to point B regardless of the terrain.  But soon even the rebels were made into race horses as specially built dirt bikes began competing for top honours in organised events. The spirit of freedom needed a new poster child and that’s when, in the wilderness of the Californian desert, the desert sleds were born. By definition, desert sleds are motorcycles with engines over 500cc that have been modified heavily, complete with bash plates, enduro handlebars and, in some cases, raised suspension. The Ducati Scrambler Desert Sled applies this formula to its otherwise more road-oriented base model, and what you get is a tred-anywhere (almost) version of the Scrambler.

The Desert Sled retains the quintessential Scrambler look. The trademark Scrambler LED DRLs are in place along with the tall handlebars and the teardrop shaped tank and the motocross-style seat. However, the headlamp now comes with a mesh grill, the seat is flatter, less contoured and slightly softer than the standard bike, while the handlebar is slightly wider than the Scrambler Icon. The biggest visual differences between the two are the significantly raised suspension, spoked, gold-painted wheels and semi-knobby dual purpose tyres. But there’s more to it than meets the eye.

The seat height, at 860mm, is considerably higher than the Icon’s 790mm, so shorter riders best steer clear of the Sled. The footpegs too are now more mid-set and flatter to ensure better control when riding while standing up. The frame has been reinforced and lengthened, running all the way around the swingarm pivot and under the engine unlike the Icon, where it ends at the rear engine mount. This helps in spreading the load better around the bike resulting in a more balanced ride even while going off the road. Compared to the Scrambler Icon, the Desert Sled gets a lengthened swingarm that increases its wheelbase by 60mm, which further translates to better stability. Plus, moving the rear wheel further back has also helped Ducati free up more space under the rear mudguard for that extra 50mm of suspension travel and to prevent the Desert Sled from bottoming out when tackling the rough stuff.

The biggest change comes in the form of the suspension. The new setup features 46mm fully-adjustable Kayaba forks up front and a longer offset monoshock at the rear. The tyres shod on the 19- and 17-inch wheels are Pirelli Scorpion Rally STR tyres specially developed for the Desert Sled. The Scrambler was always a straightforward motorcycle and the Desert Sled is no different. There is no electronic trickery here; no ride-by-wire throttle, no traction control. Just the plain old ABS, which too is switchable from the LCD display menu. The oddity here, however, is the fact that you get a tacho on the LCD display but no fuel gauge.

Honestly, it’s the same. Well, almost. It’s still the same 803cc, air-cooled, L-twin Desmodromic motor but to make it Euro IV-compliant, Ducati has reworked the internals of the engine. There is, however, no change to the output which still stands at 73PS of max power and 67Nm of peak torque. It’s still a bit rough around the edges but has a tremendous mid-range. The sweet spot for the torque lies between 3000-7000 rpm. Going above is pointless and staying below can get jittery especially if you’re sitting at 30kmph in third gear.

The throttle too has been redone and it now has a slight delay in the first few degrees of travel to eliminate the snappiness that plagued the Icon. This translates into a smoother throttle response and also instills a fair amount of confidence, especially when powering out of corners. The engine is mated to a 6-speed gearbox with well spaced out ratios. So, you have a wider range of speed in every gear, especially when you ride beyond the black stuff. The clutch is light and operating it with two fingers is never a problem.

On start up, the engine sounds a bit lacklustre. But once up to temperature, the exhaust produces an overrun that is, oh so rewarding. That slight burble and crackle is addictive. The only problem, however, is that the air-cooled engine does not take kindly to riding in traffic, especially during the notorious Indian summers.

How does it ride?

Let’s start with the seating position. It is quite different compared to the Icon. You sit much higher, high enough to eyeball Scorpio drivers. The advantage of this higher seating position is that you have better visibility as you can easily gaze over the roof of most cars without raising yourself off the perch. The seat itself is flatter compared to the Icon and much plusher. The handlebar, seat and footpeg positioning make it feel spacious and comfortable. This is what the Scrambler should have been from the outset.

The wider and higher set bars make it easy to manoeuvre especially in traffic. City sprints are a breeze as the strong mid-range allows you to stay in second gear pretty much from 20kmph all the way to 80kmph, without even so much as a hiccup. Plus, the easy throttle response is a great confidence booster, especially when navigating through narrow gaps. Even slow moving traffic is seldom a problem. Suspension is certainly softer as compared to the Icon but still manages to feel firm. All those changes to the frame, and the longer wheelbase add up to a really well balanced motorcycle. It is quite flickable in traffic and even out on open roads, it never fails to impress with its composure. And you’d be mistaken if you believe that thanks to its dirt-focus, it wouldn’t be able to handle corners well.

Ducati has managed to find that middle ground between off-road (we’ll get to that in a bit) and on-road handling. Despite the semi-knobby tyres, there is ample grip from both ends, and taking on corners is never a problem. It has good mid corner stability even over bumps, and that reworked throttle really helps you power out of corners without shaking up your confidence. I know I’ve been harping on about the throttle, but that eased up response has really made that huge a difference in the way the motorcycle behaves. You’re no longer in two minds whether you should wring it or refrain. However, don’t expect to go dragging knees around the bends. First of all, it’s too tall for that. Secondly, over a certain lean angle the the tyres do tend to remind you that they’re knobbies and not racing slicks.

The road manners are great and the perch is comfortable. On tarmac, the bike feels well balanced and that long-travel suspension can handle pretty much any amount of bad roads without breaking a sweat. While the motor isn’t one for high-speed cruising, and the naked, upright posture isn’t the best for tackling wind blast, the Desert Sled can handle mild touring duties quite well.

Can it really go off-road?

Okay, confession time. I don’t like going off-roading, simply because I feel uncomfortable and am terrible at it especially when two wheels are involved. So, I was naturally apprehensive when we rolled off the road and our photographer, Nikil, suggested that we get some off-roading shots. But as it turned out, my apprehensions were well misplaced. The Desert Sled is as capable off the road as on it if not more. After a couple of runs on the uneven Bandhwadi trails, my confidence had begun to rise.

A lot of it is down to the sheer minimalism of the bike. There are no bulky tank contours or an obtrusive front fairing with an obscenely large flyscreen. It feels spacious, narrow and manoeuvrable. There is ample space to move around and the since you can see the front tyre quite well, you can see where exactly to put it. The rest is down to the well tuned long travel suspension that was soft enough to absorb all the undulations and ruts while still ensuring that the tyres had a healthy contact patch on the ground. The route we took was fraught with ruts, gravel and sand. There was rarely a moment when the bike felt out of its element or not in control. The gravel patches were dealt with ease and  the ruts never posed a problem either. On my numerous runs for the camera I got more comfortable with the Desert Sled with each passing run. Despite the slightly intimidating numbers, the Ducati is surprisingly easy to get used to and feels predictable and flickable even on the rougher terrain.

Riding while standing up is not a problem either. The handlebars and pegs are perfectly placed and make you feel right at home. Operating the rear brake and gear lever while standing isn’t an issue either. The brakes themselves are progressive and gentle and lack the ferocious bite of the similar single disc four-piston Brembo setup of the standard Scrambler, as they are set up for off-road use and it is a good thing. Plus, the motor’s strong mid-range always ensures you can modulate the momentum without upsetting the balance of the motorcycle. It was such a treat off the road that after the numerous runs I was instructed to slow down. The only downside though is that though it can handle shallow sand and sand trails without any hiccups, in deeper sections the bike did struggle quite a bit. A set of full knobbys ought to fix that problem though. Also, the engine heat tends to catch up with your calves after a while.

Yes, at Rs 9.32 lakh, it’s over Rs 2 lakh more expensive than the standard Scrambler, and it isn’t as sharp a handler either. But you gain a lot more than you lose. In fact, apart from the engine, the Desert Sled is a different motorcycle altogether. It’s frame, power delivery and throttle mapping are different to the standard bike. It even features a longer wheelbase, different suspension, differently tuned brakes, and wider handlebars. Then there’s the sheer usability of the thing. It is more comfortable to ride and riding for extended periods of time isn’t a problem either. Plus, the ride height and the impeccably tuned suspension ensure that nothing our Indian roads throw at it can deter the Desert Sled, apart from maybe a landslide! The engine is punchy with a strong mid-range which can keep you in triple digit figures all day long without making a fuss. The biggest advantage, if your sense of adventure begins to tingle, is that you can indulge it without fussing over the sensitive bits simply because there aren’t any. In essence, you get an everyday ride, something that can handle a bit of touring and more importantly, a fun off-roader all in one motorcycle.